An FFT-based coarse frequency acquisition block is being tested in GNU Radio. The algorithm used can be found on the GOES satellite user manual and is summarized in the figure below.

The algorithm works by: 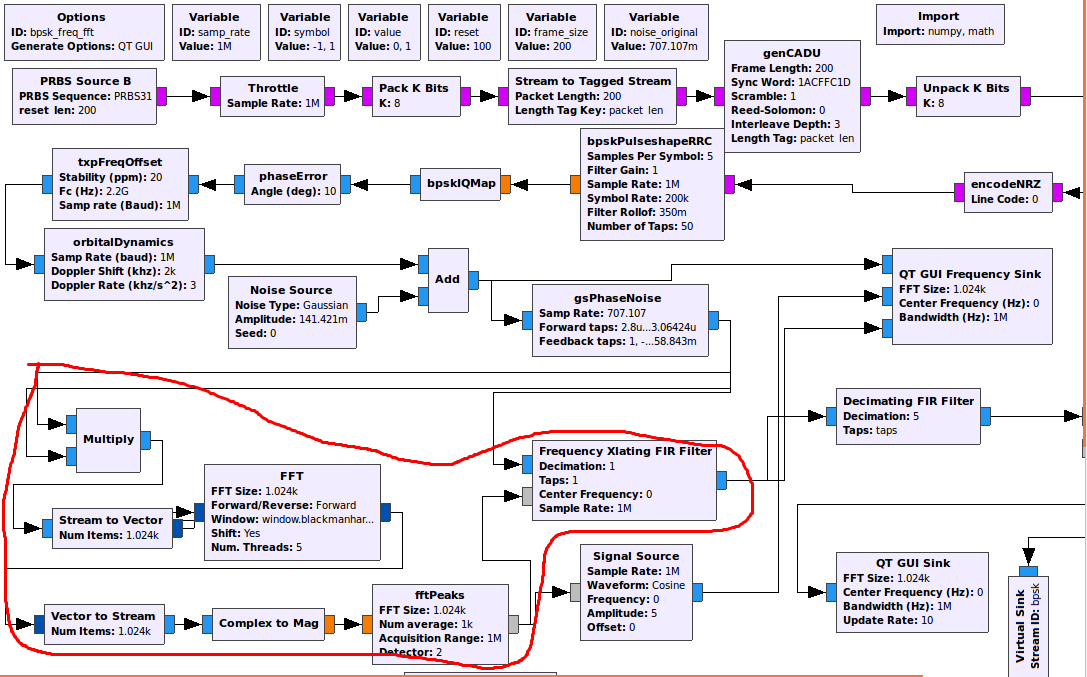 According to the GOES manual, the same algorithm should work for OQPSK, and I assume by extension, QPSK. However, the carrier derived by the algorithm for the case of QPSK is pretty bad, especially in low-SNR scenarios.

I have two questions

Disclaimer: Using a fouth-law as proposed by @DanBoschen resulted in expected BER performance. For all intents and purposes, the answer is already accepted. But, I have observed some behavior of the nature of FFT relating to this question. I figured there wouldn't be any need to open a new question since we are already here.

In the flowgraph, the sample rate used is 8Mhz. The fourth-law-derived carrier can be tracked from -4Mhz to +4Mhz. There seems to be an "FFT ambiguity" when the offset frequency is above $\frac{1}{8}$-th the sample rate i.e anything above 1Mhz. Taking, for example, an offset of 1.5Mhz. The fourth-law detector will create a carrier at 6Mhz, which will be wrapped to -2Mhz in the second Nyquist zone. Dividing this by 4 results into an offset of -0.5Mhz, instead of 1.5Mhz, as shown in the figure below (derived carrier in green).

A square operation creates an unmodulated tone for a BPSK signal at 2x the carrier frequency (a pure tone for the case that the signal was unfiltered or rectangular pulses with perfect phase and amplitude balance in the BPSK modulation, and typically a stronger carrier with weaker sidebands in the more common filtered or pulse-shaped cases). For QPSK signals (including OQPSK) a fourth law operation is required which produces the same at 4x the carrier frequency.

This can be explained by knowing that multiplying signals causes their phases to add. So a signal multiplied by itself (square) that is modulated 0° to 180° would then become 0° to 360° which is the same as 0° (unmodulated). For QPSK the states are 0°, 90°, 180° and 270° where it can be seen that multiplying any of those phases by 4 results in 0° using the same modulo 360 operation when adding phase.

It is typical when using this approach for carrier recovery to also use a PLL to track the recovered 4x carrier in order to clean up the residual (much lower) sidebands resulting from the finite bandwidth modulated signal and then the PLL-filtered signal is frequency divided to complete the carrier recovery.

I tend not to use this approach given the higher sampling frequency required and the comparative complexity to other methods when implementing all digital systems but this would make for a relatively simple analog approach using analog frequency multipliers. I detail another approach for carrier recovery specific to BPSK, QPSK and QAM that would be in my opinion much more efficient for a digital radio implementation in this post: High modulation index PSK - carrier recovery

This is also an interesting approach by fred harris for a frequency lock loop that I believe would work for QPSK carrier acquisition with additional subsequent phase tracking: How does this FLL work?

Not the answer you're looking for? Browse other questions tagged fft digital-communications gnuradio or ask your own question.

6
How does this FLL work?
3
High modulation index PSK - carrier recovery
2
How to demodulation BPSK in real case(through a channel)?
0
FFT- based frequency offset estimation algorithm