I want to run a numerical simulation of a system (eg first order low pass filter) that is stimulated with a photocurrent-like signal. My preferred language is Python.

In my understanding there are two main ways to model the photocurrent time series.

The problem I have with this is that if I becomes small enough then average number of electrons per dT is very low and when I draw samples from the distribution it behaves like a quantum current (some samples will have 0,1,2,3,.. electrons). Is this quantization a corrected model or is it a limitation of it? What is the meaning of dT in this case? Is it some sort of averaging? Should the dT be increased to avoid the quantization? If I increase dT, how much should it be increased? Does a change in dT change the noise power of a Poisson time series? How is dT related to the noise bandwidth of the signal? How can I rescale the noise after a dT change to maintain the same input noise power?

Are these approaches fundamentally correct? How do they differ from each other? Is there an equivalence between the two? Does Physics come actually into play with quantization when considering very small currents or is it an artifact of the modeling?

The quantization of the photocurrent is an actual physical phenomenon.

I'll use $\Delta T$ in place of your $dT$. It is not a variable describing the actual physical process but rather the time step of your approximate model. Effectively you are filtering the continuous-time Poisson point process by a continuous-time "moving average" filter with a rectangular impulse response of length $\Delta T$ and sampling the filtered signal uniformly with a sampling period $\Delta T$. The filter acts similarly to a low-pass filter, but is not very effective at band-limiting the process. Therefore you have aliasing and it becomes difficult to interpret your results. If you don't know what aliasing means, have a look at the question: "explanation of Hybrid systems?" and its answers for an introduction on sampling of continuous-time signals.

Non-uniform sampling: The impulse response of a first-order low-pass filter is a right-sided exponential function. It would be easy to convolve the Poisson point process directly by it. Non-uniformly sampling the filtered signal at the event times would give an unambiguous representation of the signal that allows exact reconstruction of the signal from the samples. This would not be sampling of a band-limited signal but would take advantage of the special form of the signal. See math later below.

Uniform sampling: If the cut-off frequency of the first-order low-pass filter is low enough relative to the sampling frequency, then uniform sampling of the filtered signal does not cause much aliasing and you will have quite a clean discrete-time signal (time series) to work with. When time stepping, the signal decays exponentially from the previous sample to the current sample, unless there have been events within the last time step. In that case you'd calculate the contribution of the filtered events and add that into the current signal value. That's the beauty of the right-sided exponential impulse response: it allows to forget when the past events occurred, combining their contribution to a single value that keeps decaying exponentially. The drawback of uniform sampling is that if there are two or more events between successive samples, then their exact times cannot in general be reconstructed from the samples of the filtered signal.

In this presentation I will not use units, for my own convenience. The impulse response $h$ of a resistor-capacitor (RC) filter, as function of continuous time $t$, is of form: 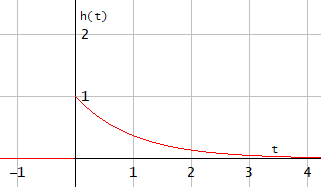 where $a$ is a positive constant that determines the decay rate. If this is convolved with a realization of a Poisson process with $K$ Dirac impulse events at times $p_k$, $0 < k \le K$, then we get the signal $y$ of which you can find some literature under the keyword filtered Poisson process: 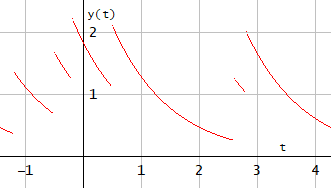 We can set up a sample point at time $t_n$. If we know the signal value $y(t_n)$ at that point, then we can forget the events at or before that time and still reconstruct $y(t)$ at later times $t \ge t_n$:

or in a less formal short-hand notation:

This is a property unique to the one-sided exponential function $h(t)$. The effect of an event at time $p_k$ is already included in $y(p_k)$ with the way Eq. 1 is currently defined. We can make explicit also that because the impulse response is causal, the events happening after time $t$ do not affect $y(t)$: 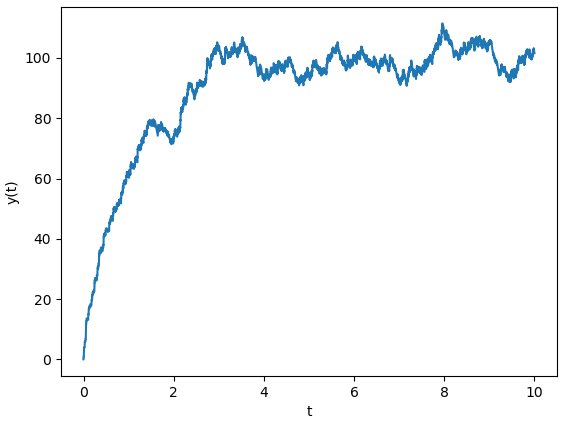 Figure 3. RC-filtered Poisson process plotted by the above Python script. 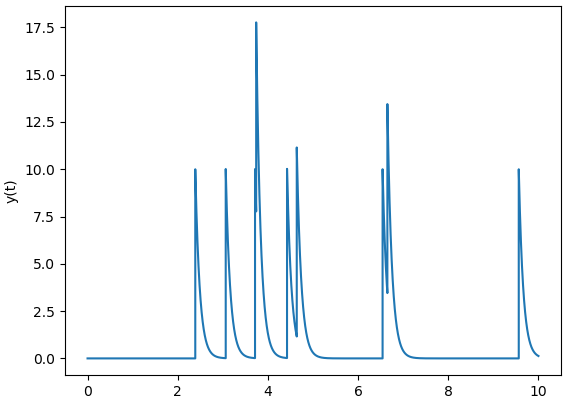 Figure 4. RC-filtered Poisson process reparameterized with rate = 1 and a = 10.

This is an excellent series of questions, so I will have a go at part of it! I will start with an example from Verdeyen’s book (J. T. Verdeyen, Laser Electronics, Prentice-Hall, Inc., Englewood Cliffs, NJ, ©1981, Chapter 14). Assume $\lambda$ = 500 nm, quantum efficiency = 0.15, photomultiplier (PMT) gain = 1.68x$10^7$, transimpedance = 1 k$\Omega$ and RC= 100 $\mu$s. Assume $\Delta$t = 1 $\mu$s and the output of the RC LPF is sampled at the end of every 100 $\mu$s interval. Start at the bottom: assume an average of 2 photons/$\mu$s arrive at the PMT’s photocathode. Then the average incident optical power is 0.795 pW, the average photocurrent is 806 nA and the TIA’s average output voltage is 0.806 mV. The first figure below shows the Mueller calculus simulation models, with the above assumptions. (It is deliberately simple, for present purposes, but can be made much more complicated and realistic if desired.) 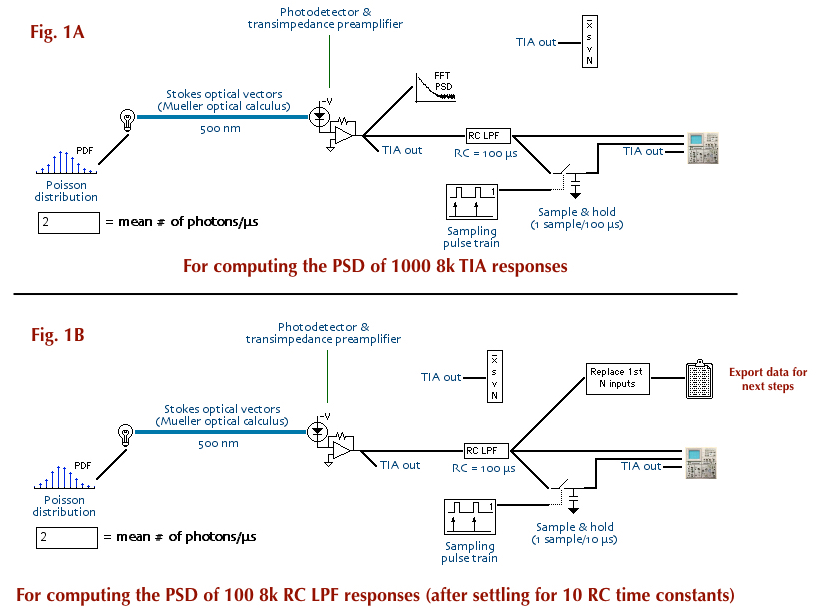 The light source produces Stokes vectors at the rate of 1/$\mu$s, and the intensity is proportional to the number of photons in that $\mu$s interval. The detector and transimpedance preamplifier (TIA) converts the incident light intensities to photocurrents and then to voltages. The FFT PSD block shows (second figure) that the noise is white.

Then the RC LPF filters the TIA’s outputs and its outputs are sampled every 100 $\mu$s and also processed to yield a PSD (third figure). The TIA's PSD is the average of 1000 8k FFT PSDs, the RC LPF's PSD is the average of just 100 8k FFT PSDs (Fig. 1B shows the data collection only, but not the separate FFT PSD processing), and they are all unilateral and mean-subtracted.

Increasing the photon flux to 20 photons/$\mu$s gives the results in the fifth figure. Now the quantization is not so bad and the signal-to-noise ratio is higher, as expected. Increasing the photon flux further makes it reasonable to replace the Poisson distribution with its ‘envelope’ Gaussian distribution (not shown here). Hope this helps a bit: there is FAR more that can be said!

Note: I have corrected the first three figures to be consistent with the 'sample calculation' values given several paragraphs below. I will go through and update everything as needed or necessary!

The software I use is ExtendSim (commercial simulation software from Imagine That, Inc.), augmented with my free LightStone libraries of blocks (with full commented source code for all blocks). It is easy to construct time-series after the S&H and find the variance: I have been playing with just that since I saw your comment. Now for the specific question you ask, if photon flux is constant, at 2 photons/$\mu$s (= 20 photons/10$\mu$s), then the distinction is in the measurement interval, $\tau$. For the former, $\tau$ = 1 $\mu$s, so the mean number of photons in the measurement interval, m, is 2. For the latter, $\tau$ = 10 $\mu$s, m = 20 = 2 photons/$\mu$s x 10 $\mu$s. If the simulation step size, $\Delta$t, is constant at 1 $\mu$s, then the average signal magnitude in the larger $\tau$ will be 20/2 times larger than in the smaller $\tau$. The unilateral PSD will also be directly proportional to m, so it will be 10 times larger as well. Hence the variance at the output of the RC LPF will be 10 times larger (to the extent that the digital RC LPF ‘honors’ the analog RC LPF’s 1/4RC noise bandwidth), so the standard deviation will be $10^{1/2}$ times larger. So the SNR, as signal magnitude/noise standard deviation, is $10^{1/2}$ times larger, as expected for shot noise. By the way, in my field, SNRs are not usually done as signal power/noise power. 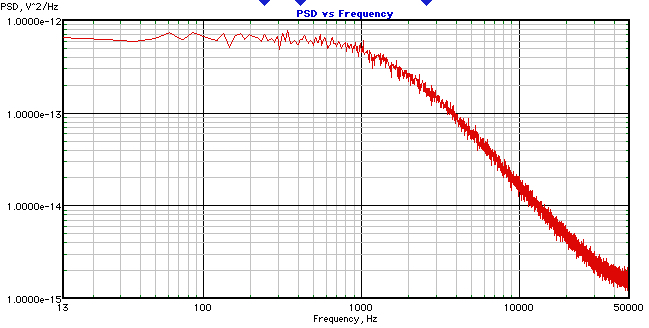 Not the answer you're looking for? Browse other questions tagged discrete-signals noise or ask your own question.