I have two audio signals that look incredibly similar when plotted. However, when I play them, they sound quite different. The only difference I can even see in their plots is that one signal looks darker than the other. Why would this be happening? 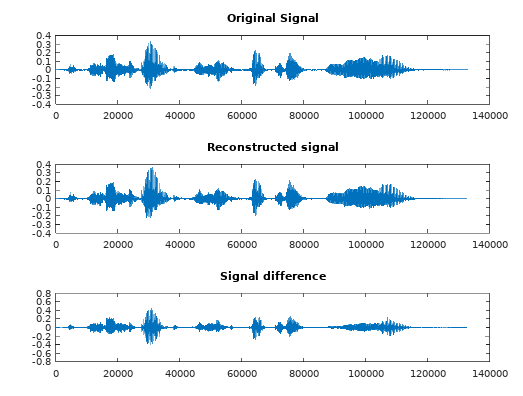 FYI: The signal on the top is one that has been reconstructed from a reconstruction algorithm and the one in the bottom is the original one.

Here's some further data about how the signal has been produced. The original signal is a sample audio data I downloaded off the internet. The purpose of my experiment is to produce a close enough signal from only the amplitude spectrum and without the phase information. For similar, but slower algorithms, one can look at the Griffin and Lim algorithm and also the single pass spectrogram inversion paper.

In my case, I'm getting a waveform very close to the original signal, but there's a significant "noise" when listening to the output waveform.

So in short, the question is: waveforms looking so close to each other sound very different which is not very intuitive. Also, when signals look so similar, it is difficult to discern that there's any kind of noise involved. So what kind of hidden noise is this?

One last piece of information: the correlation function gives 0.69 as the output when comparing these two signals. Not sure if that's useful

First, the original $x$ and reconstructed $\hat{x}$ signals have a peak amplitude around $0.35$. Their difference peaks above $0.40$. That happens between two time-shifted like-alike signals.

Second, the difference seems to relate to the amplitude. Processing maybe be non-linear, and it could be interesting to look at relative differences like $2(x -\hat{x})/(x +\hat{x})$ as well.

Phase (and phase noise) plays an important role in audio quality, that's why many state-of-the-art algorithms work with complex-valued representations (one paper example from ICLR 2019).

Perhaps you should examine closer such local differences as MBaz suggested.

Not the answer you're looking for? Browse other questions tagged signal-analysis audio or ask your own question.

2
method to detect frequency sweep in audio
1
How to mix two audio files recorded with different settings to obtain a realistic result
0
How to create a swept / chirp signal between a given starting audio signal and a given ending audio signal
2
How can you 'perfectly' reconstruct phase for transients in a modified audio absolute spectrogram?
0
No cross-correlation between same signal recorded using two different microphones
4
What is this strange pulse in my audio output?
4
Spectral analysis with high selectivity but low number of points
0
Audio signal arrival timing, impulse response, and reverberation