The problem may be summarized as follows: I have a stochastic signals and I want to measure an increasing delay, as depicted in the following picture. The picture represents the signal as it is being delayed. I pick one acquisition as a reference (e.g. black signal), and then cross-correlate with later acquisitions (red and green) to find the delay. 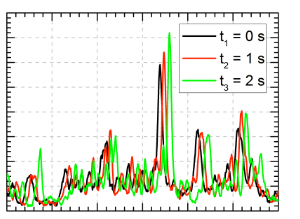 As the signal is delayed, however, it progressively decorrelates with respect to the first measurement, which we take as reference. This deteriorates TDE performance (due to worse cramer-rao), leading to gradually worse performance and ultimately, to anomalous estimates.

The solution that we have currently implemented is to make a qualitative measurement of cross-correlation between two signals (checking the amplitude ratio between the main cross-correlation lobe and secondary lobes), and once it crosses a certain threshold we update the reference signal to the current one.

There are a couple of problems with this approach, which pose a trade-off: First, before updating, as the signal gets increasingly decorrelated, the performance of TDE is gradually worse due to decorrelation between both signals. On the other hand, updating the reference implies attributing to the last measurement a reference time-delay value, which will have its own associated estimation error. Therefore, every time the reference signal is updated, we are effectively integrating estimation errors, which ultimately present themselves as 1/f noise.

The question, in this case, is whether there is a smarter way to track the signal and minimize reference updates, or address the onset of 1/f noise in any way. Also, as a side-note, what would be a good measurement for correlation quality between two delayed signals?

Browse other questions tagged cross-correlation correlation delay or ask your own question.