Lets say I have a sinusoidal function $s$ that looks like 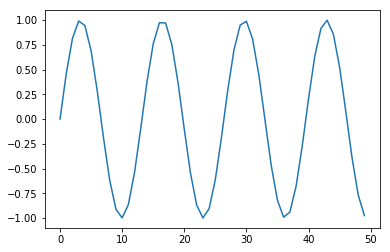 However, using the numpy's inverse transform I can only get back 13 points. 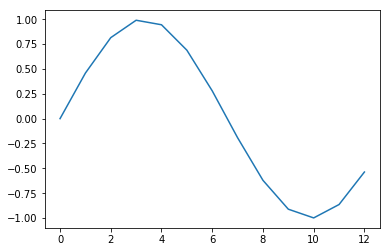 How can I get the rest of the (now just repeating) signal back? I have tried to build a function myself, but it does not quite work out...

To give a bit more detail on the problem. I want to take the approximate difference between to signals that vary between different sinusoids over time, but are inherently phase shifted. So my idea was to take the last $k$ timepoints, estimate the Fourier coefficient, take the difference in Fourier space and evaluate the resulting function represented by the coefficients at time point $t$. Therefore, I want to know how I can evaluate the coefficients at $t$. I know the periods of the signals that I am varying between, so can go back enough $k$ points to capture all relevant frequencies.

Browse other questions tagged fourier-transform python or ask your own question.

10
Artifacts in FFT
3
How moving part pixel intensity values of video frames becomes dominant compared to stationary part intensities in reconstructed frames?
1
What is difference between outputs of Fourier transform and Fourier series of a periodic square waveform?
0
Generate fourier transform signal
0
Why do we use sinc interpolation rather than just multiply the frequency domain signal by rect?
2
a-weighting signal without digital filter
2
Numpy fft2 frequency shift
0
Fourier transformed acceleration from Fourier Transform of velocity and position using Omega arithmetic
0
FFT giving a huge magnitude of first frequency and pretty much zero after that