I am reading this paper by Han et al. (2014). In this article, the authors extract detailed information from geomagnetic data sampled at 1Hz using a daubechies 5 (db5) wavelet: they reconstruct the signal using the coefficients from the 6th level only. The authors explain that the central frequency of the resulting reconstructed signal is 0.01Hz.

I have reprocessed similar data following the same steps and have convinced myself that the central frequency of the signal reconstructed using only coefficients from the 6th level is indeed around 0.01Hz. Below are the PSD plots for both the original and reconstructed signals, generated using Python: 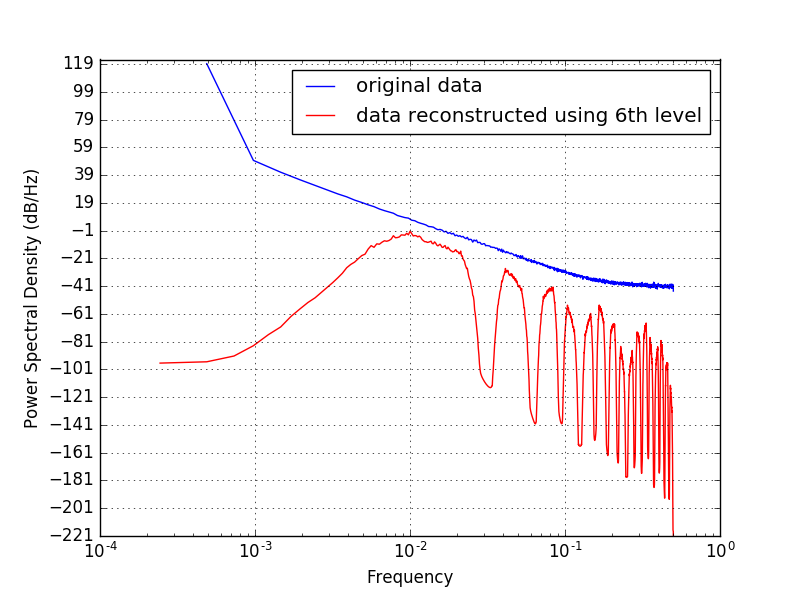 But is there a way to analytically determine the central frequency of the reconstructed signal?

Any clarification would be appreciated. Thanks!

In this paper, we yield discrete wavelet transform (DWT) and decompose the original signature into six levels. The central frequency ($F_a$) of signals in each level is given as

where $F_c$ is the frequency of basic wavelet; $a$ is the scale of the level, and $\Delta$ is the sampling rate of original data. After evaluating different kinds of wavelets, we adopted Daubechies 5 (db5) as the mother wavelet. Moreover, the db5 wavelet has been proved to be effective in the previous study (Jach et al. 2006). According to Eq. 4, for db5 wavelet, the central frequency of signals in the sixth level is 0.01 Hz.

Not the answer you're looking for? Browse other questions tagged sampling python filtering dwt or ask your own question.