Amplitude Response at greater than half the sampling frequency

I am hoping to clear up some confusion I have. In a lab I am taking, we analyzed the amplitude response of a simple system. We found that as we increased the input signal frequency to greater than half the sampling frequency, the output signal began to flat line. The picture below show the corresponding Amplitude Response. 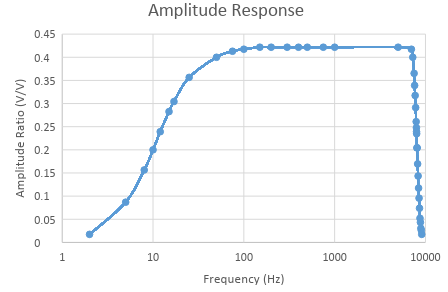 I am aware of the Nyquist theorem, and I thought that the reason the output signal flatlined at frequencies greater than 8 kHz was because the sampling frequency was 16 kHz.

This is a phenomenon called aliasing

Usually, there are anti-aliasing filters that will filter out signals with frequencies higher than fs/2.

Not the answer you're looking for? Browse other questions tagged sampling nyquist aliasing or ask your own question.

0
Effects of sampling rate approaching the Nyquist frequency? (not undersampling)
3
What is the proof of the equation for the aliased frequency fa = |R*n - fs|?
0
100 kHz sinewave contaminating a signal sampled at 48 kHz
4
Why is a square wave aliased?
8
Is sampling at double the desired reproduction frequency accurate?
2
Does a 20 kHz sine wave sampled at 44.1 kHz need to be reconstituted before playback?
1
Does the Shannon theorem not apply when the amplitude of a wave is changed faster than half the time period of the wave?
2
Aliasing in Doppler Radar
19
What sampling frequency should I use if Nyquist is not available?