Is my Kalman Filter model reasonable? Using for a 3 wheels rover platform

Background: I'm building a 3 omniwheel rover platform that looks something like this: 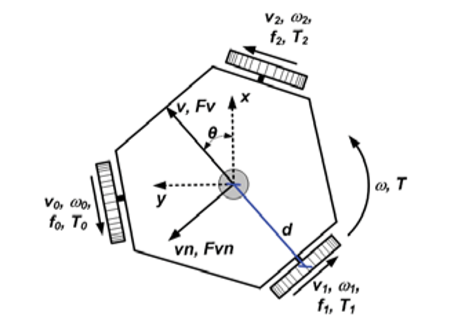 So let's say this is my model:

I haven't really make up my mind about what Q should be.

I haven't made up my mind about choosing R.

I'm also aware that I dropped all the negative sign and the hat sign but hopefully it won't bother the readers too much.

What do you think about this module? Should I change something? Is something is not correct? This is my first time trying out Kalman filter (or any filter at all) after spending a full day learning about it.

In the future I would also like to add an encoder on each wheels to get a better reading.

Browse other questions tagged kalman-filters sensor tracking or ask your own question.

0
about Kalman gain
8
How to Determine Covariance Matrix $Q$ and $R$ in Kalman Filter
0
How to form Kalman filtering matrices for a problem with variable acceleration?
2
Kalman for 3D position and 1D orientation
4
Using the Kalman filter given acceleration to estimate position and velocity
8
Extended Kalman Filter (EKF) for Non Linear (Coordinate Conversion - Polar to Cartesian) Measurements and Linear Predictions