spectrum for a communication signal [closed]

I have a communication signal. 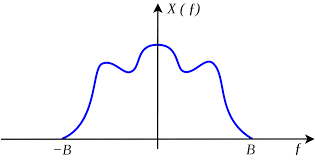 $X$ is not constant, as shown in the plot. But if you are asking about two signals with the same bandwidth but different magnitudes of Fourier transform, then it simply means they carry different amounts of energy, where energy is given by:

2
How to Simulate AWGN (Additive White Gaussian Noise) in Communication Systems for Specific Bandwidth
0
General Questions MIMO Communication theory
3
Why is CDMA not enough for wireless communication?
2
Bandlimiting and OFDM spectrum - what is considered “bandlimited”?
0
Signal bandwidth and channel bandwidth