For digital beamforming, we can form as many beams as we want. No matter where I read about this subject I cannot find any discussion of the interference that one would expect between beams (not within a single beam).

For example, in my picture, if the transmitter forms three simultaneous beams with receivers 1, 2, and 3, then communication with receiver 3 would be fine but wouldn't the tight spacing of receiver 1 and 2 introduce a lot of interference between the beam the transmitter forms with Rx 1 and the beam it forms with Rx 2? Or, are there ways in which beams can be set so that they don't interfere?

EDIT: To make the question more clear, say for example all nodes operate in half-duplex. Say during some time period, the transmitting node decides to send an identical packet to each of the receivers at the same time. There is no frequency, time, or code division multiplexing. In this case, would receiver 1 receive some of sidelobe power from the beam meant for receiver 2? And is it really considered interference if the transmitter is sending the same information to all receivers?

And vice versa, if each receiver is to receive independent, potentially different information, then would receiver 1 get some interference from the sidelobe power from the beam meant for receiver 2? 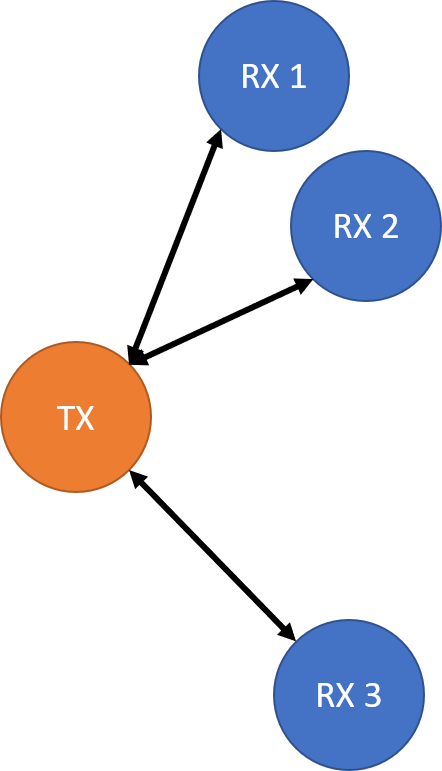 Browse other questions tagged digital-communications beamforming or ask your own question.

0
Beamforming with directional sensors
1
What are the fundamental reasons that suggest us to minimise transmission power for energy-efficient radio link design?
4
Intuitive interpretation of Fourier transform in beamforming
2
Delay and sum Beamforming
0
Beamforming techniques - pros and cons
3
Beamforming back lobes question