I am using MFCC values as features for a machine learning model of speech, detecting age from a voice recording of a person.

I work with voice datasets I found on the web: common-voice and vctk.

Each utterance is ~3 seconds long. I calculate the MFCC values in frames of 25ms with overlap of 10ms, and then average over the whole utterance. In addition, I calculate std of the coefficients. I am using python librosa library for the calculation.

I plot the values I get for ~16,000 utterances in each dataset, and get different distributions. I would expect the distributions to be similar as the number of examples is big and should represent the entire population. 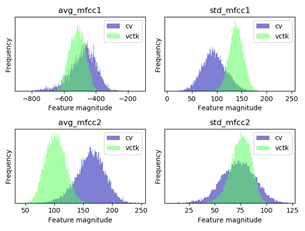 Browse other questions tagged speech-processing mfcc machine-learning or ask your own question.

8
Speech comparison algorithm for rating on similarities
6
How to stitch together MFCCs from multiple frames?
0
MFCC extraction for speaker verification
2
Detecting phones in a word audio
0
MFCC from DFT (FFT)
1
MFCC coefficients
0
Replicating Research: Feature Vectors of Audio Samples
1
Given MFCC values for some wav’s, how can I easily tell if all speakers are the same?
0
How to use MFCC (or any other tool/method/algorithm) for speech verification