I'm learning to implement Goertzel's algorithm to detect DTMF tones from recorded wave files. I got one implemented in python from here. It supports audio sampled at 8 kHz and 16 kHz. I would like to extend it to support audio files sampled at 24 kHz, 32 kHz and 48 kHz.

From the code I got from the link above, I see that the author has set the following precondition parameters/constants:

According to this article, before one can do the actual Goertzel, two of the preliminary calculations are:

Dual-tone multi-frequency (DTMF) tones should be of certain minimum duration (40 ms) and quality to be detected (reviewed in ITU TABLE A-1/Q.24). The detection algorithm that you cite uses a block duration of $t=N/f_s,$ where $N$ is the block length in samples and $f_s$ is the sampling frequency. The duration is either 210/(16 kHz) = 13.125 ms or 92/(8 kHz) = 11.5 ms. To ensure that the algorithm functions as expected, the block duration should be kept the same. I don't know why the lengths differ for the different sampling frequencies in the cited algo, but it should be okay to calculate $N$ as:

which should give the same timing and frequency resolution as with the 8 kHz sampling frequency used in the original sources on Wikipedia by an unknown author.

There are some worrisome large hard-coded constants (4.0e5 and 1.0e9) in the source code. Such hint to a lack of normalization:

They may require changing if you change $N,$ by the same proportion, I think.

Even if the Goertzel algorithm is not restricted to frequencies of a discrete Fourier transform (DFT) of length $N,$ (see this answer) there may be reason for tuning $N$ that is not explained by duration specifications. For sinusoidal input of frequency $f$, the magnitude of the same frequency detected by a Goertzel algorithm fluctuates slightly as function of time depending on the combination of frequency $f$ and $N$. For simplicity of the expressions that follow, frequency is expressed in radians as:

For initial phase $\alpha$ at the start of the window, the unnormalized detected magnitude will be:

The fluctuation can be seen in this example: 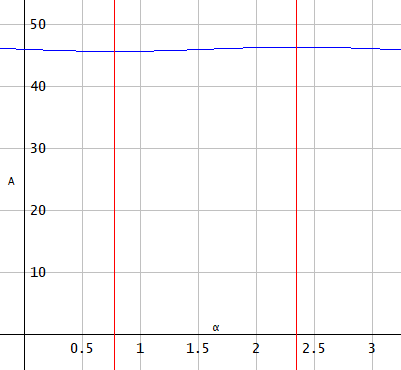 An interesting observation is that there will no fluctuation of the Goertzel detected magnitude $A$ if the frequency $\omega$ is a multiple of $\pi/N.$ In contrast, DFT bins are at multiples of $2\pi/N.$ (Zaplata & Kasal 2005 discuss the fluctuation phenomenon, but do not recognize this difference between the Goertzel algorithm and DFT.)

For other frequencies, the $\pi\text{-}$periodic function $A(\alpha)$ gets its smallest and largest values (not necessarily in that order) at:

A reason why $N=92$ might have been preferred is that in some older version they only allowed DFT bin frequencies. In that case $N=93$ would be a pretty bad choice, as some DTMF frequencies would fall almost just between successive bins, which is perfectly fine for the Goertzel algorithm (or generalized DFT with a frequency shift of $1/2$ binwidth), but almost the worst-case scenario when using DFT:

The final word would be to test the performance in a test suite and to tune $N$ based on that.

With cues from Olli's answer, I have made the modifications in the program here.

The modification I did was that I kept the block duration as :

So, according to this :

Which in the python code is translated as follows:

Though I have made it work, I'm not accepting this as an answer yet because I still want to know how the block duration is arrived at. Because, it seems to work with :

as well. According to which :

I am waiting for an elaborate answer post which would help me understand the underlying concepts.

Not the answer you're looking for? Browse other questions tagged audio python algorithms or ask your own question.