The main idea is to take several frames of the same scene, each blurred due to camera shake originated from hand tremor vibrations (which are random in nature). Since the camera trajectories of each frame are different, the blur kernels are also different. Thus, each Fourier frequency of the original scene will be differently affected on each frame of the burst.

Obviously in a real scenario there are additional variables affecting the reconstruction (scene/lighting changes during burst, frames misalignment, noise, etc.), but I'm am dealing with a simple toy-case where I took a sharp image and blurred it with 100 different normalized and centered blur kernels (the blur kernels centers of gravity were centered up to sub-pixel values, so not [0,0], but [0.2,-0.3] for example). 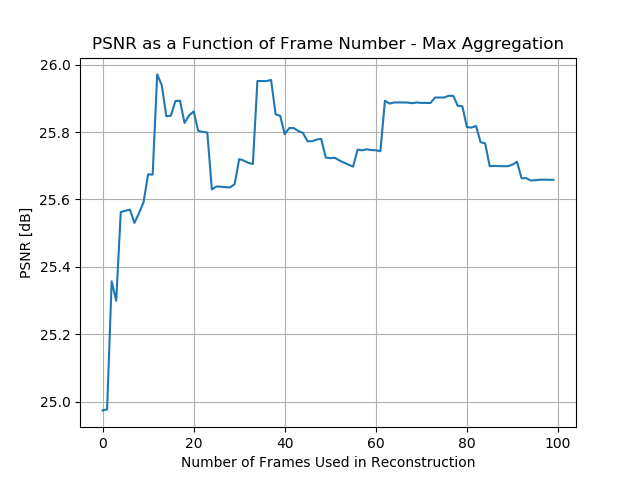 What I don't understand is what is the source for the drops in PSNR values when taking more frames (like 25 frames compared to 15)? For my toy-case, shouldn't the plot be monotonically increasing?

The code for the algorithm:

Browse other questions tagged image-processing fourier-transform self-study or ask your own question.

6
Deblurring algorithm to precede thresholding - speed over accuracy
4
Is it possible to do single vehicle tracking using Fourier transform?
1
Given a downscaled image, produce Gaussian blur of the original image
0
Capturing images on fast moving conveyor belt
8
Identifying license plate number of a thief's car from a video
1
Fourier transform of moving image sensor
1
Is information lost due to Hanning window perturbations?
2
What is Gamma correction - is my beginner's interpretation right?
0
What does opencv `mean` function do when passing a mask of zeros?