Identification of a transfer function

Can you obtain a transfer function in frequency domain with a bode plot form given by this function: $$ S=k_1 \sqrt{1+\frac{k_2}{f}} $$ I did not managed it because actually in the lowest part of frequencies decreases with 10dB/dec. So is not a simple pole (20dB/dec) and zero function. Maybe it is possible to obtain such function by adding many low pass filters. Any idea?

The objective is to produce noise, presumably Gaussian distributed, that has both white and 1/f components. This is evident from the desired power transfer function, i.e., the square of the OP's "S" expression, which would be used to convert input white noise to output white plus 1/f noise. The OP does not state whether the PSD should be unilateral or bilateral, so it will be assumed, without loss of generality, to be unilateral. Hence the unilateral noise PSD is 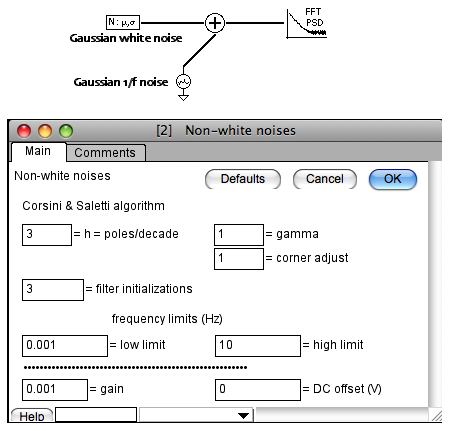 The second step is to specify $\mathrm{k_2}$. Using the noise generator described previously here, it is not feasible to directly enter a noise corner frequency into the non-white noise generator code. However, it is necessary to enter the desired low limit and high limit for the non-white noise, as shown in the dialog box in the figure, so the high limit can be adjusted empirically to obtain the desired noise corner frequency. Note that $\gamma = 1$ generates $\mathrm{1/f}$ noise and there is an optional gain adjustment as well.

Then the third figure shows the average of 1000 32k FFT PSDs: 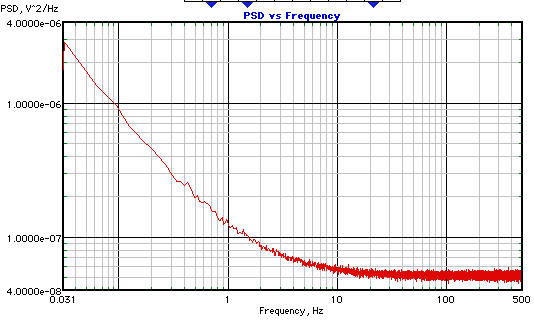 If this noise was the dominant one in an experiment, and if the signal was baseband, then the measurement would be afflicted with $\mathrm{1/f}$ noise and all the annoying consequences that entails. But if it was feasible to modulate production of the signal, before the signal encountered the noise, then the signal could be deliberately located in the white noise 'flats' and a lock-in amplifier could perform the customary demodulation.

Not the answer you're looking for? Browse other questions tagged transfer-function or ask your own question.