It may be a really simple question, but I'm not sure about this one:

Given a complex white Gaussian noise process with iid real and imaginary parts and a double sided power spectral density of $N_0/2$. What is the PSD of this random process?

@Dan Boschen gives a precise answer in the comment. I would like to add to that a simple derivation using the formal definition as

Where $E$ stands for expectation and the process $x(t)$ is the one you describe in OP. Since it is complex, we can decompose it as $$x(t) = r(t) + j.i(t)$$ Where $r(t),i(t)$ are the real and imaginary parts of the process, which are themselves Gaussian. Now applying the PSD definition on top, we get 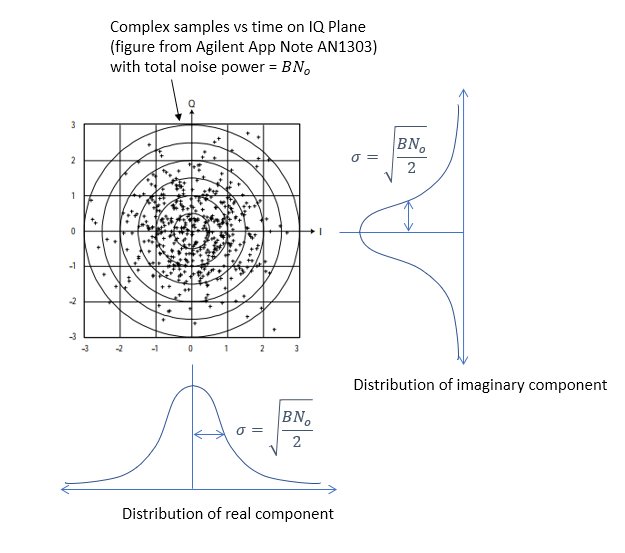 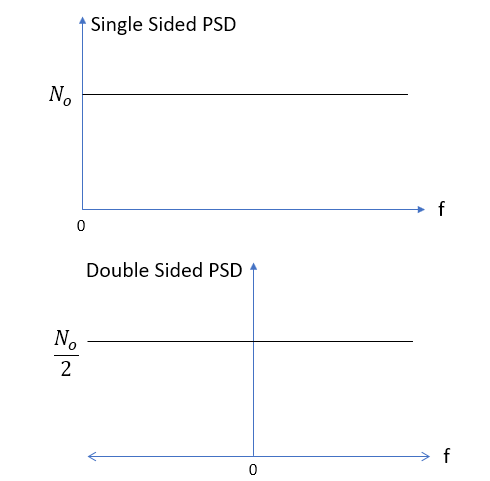 Thus in this we have made two considerations in how the power may be distributed; either in the positive and negative frequency axis if we present Single or Double-sided spectrums, and in the real and imaginary axis if we consider how the power in the full complex signal ($N_o$) is distributed between real and imaginary components. For example, if we were only to consider the real component, the power spectral density would be $N_o/2$ and then if we viewed that as a Double Sided PSD, the PSD would be $N_o/4$.

Single and Double Sided power spectral densities are frequency encountered when working with phase noise, which may provide a further intuitive way of seeing this: The double sided PSD for phase noise is given as $\scr{L}_\phi(f)$ and represents what we would read directly off of a spectrum analyzer, where we can observe both the upper and lower sidebands of the spectrum (although we typically only report one side on the plot which causes confusion in if it should be called single or double sided; one side is shown but it is a double sided power spectral density quantity--- we just don't need to show the other side since it is identical). The single sided power spectral density $S_\phi(f)$ represents the power from both sidebands as given on a plot with a positive frequency axis only (since the negative sideband is equivalent to the positive, we can put it all on the positive frequency axis simply by doubling in power what we read off of the spectrum analyzer). So $S_\phi(f)$ represents all the power and is used in related calculations where we integrate over a band of frequency offsets, while $\scr{L}_\phi(f)$ is convenient in that we can read it directly off of test equipment (spectrum analyzers).

Not the answer you're looking for? Browse other questions tagged digital-communications gaussian random-process complex-random-variable or ask your own question.

3
Why is the relationship between Es/N0 and SNR different for complex and real signals?
0
Complex Samples (IQ) - Baseband Filtering