What is the (approximate) function for amplitude of a plucked string over time? Does it differ between string types?

Impetus: I'm currently working on my first synthesizer, after many years of playing with them. I've just added an ADSR envelope to modify the gain, but for some reason it sounds wrong to me. I've asked around forums whether or not I'm supposed to apply the envelope to the amplitude linearly, and it would appear that's the normal way to do it. So my guess here is that experience with acoustic instruments has conditioned me to hear drop off differently. In order to prove/disprove this theory, I would like an answer to the following...

Question: What is the (approximate) function for amplitude of a plucked string over time? Is it linear, or curved? And, if it's curved, is that curvature a product of the material, tension, or other variables?

Detailed Explanation: In this context, what I mean by "function for amplitude" is the value by which a simple wave would be multiplied over time to create a reasonably approximate rate of fade out. I do realize the actual function of amplitude is probably a very complex physics problem, and while I think it would be interesting to cite some sources in that vein, it is not my intention to create a true to physics simulation of a string.

An exponentially decaying envelope $a\exp(-b x)$ is a good choice, and is used for example in vintage Yamaha FM synthesizers. It has the favorable property that over any constant length time interval, by the end of the interval the envelope has decayed to a constant fraction of what it was at the beginning of the interval. Damped oscillation (with some frequency-dependent energy loss) of a string is largely sinusoidal after enough time has passed, and if the oscillation is small enough that the system can be considered linear, then the amplitude loss per time unit will be proportional to the amplitude, giving an exponentially decaying envelope. Closer to the attack these assumptions do not hold.

In the simple exponential decay model, the choice of material could only manifest itself in the decay rate constant $b.$ If it would affect also $a,$ the player could adjust the plucking strength to compensate, nullifying this effect.

This will be very hand-wavy, but for small amplitudes (no non-linearities), the energy loss to the air depends on the acoustic impendance matching between the string, the instrument body, and the air. The acoustic impedance of air is $1.2 \text{ kg}/\text{m}^3 \times 344\text{ m}/\text{s},$ which is the product of the density and speed of sound. In solid materials both of these numbers are typically higher, and transmission of the vibration to the air, from a material of higher density and/or with a higher speed of sound, will require more reflections and will take more time compared to a material for which the figures are smaller. Here both the string and the instrument body are going to affect the outcome. The instrument body may also provide acoustic impedance conversion mechanically, so it's not all about materials.

Exponential decay of the amplitude is linear decay in dB scale.

To a first approximation, a plucked string has an exponential decay, so your envelope will look like $$x(t) = a \exp -bt.$$

However, if you actually plot the envelope of a string's decay, you will see a more complicated picture. Here is the decay envelope of a piano sample that I plotted (Y axis is dB, X axis spans 16 seconds): 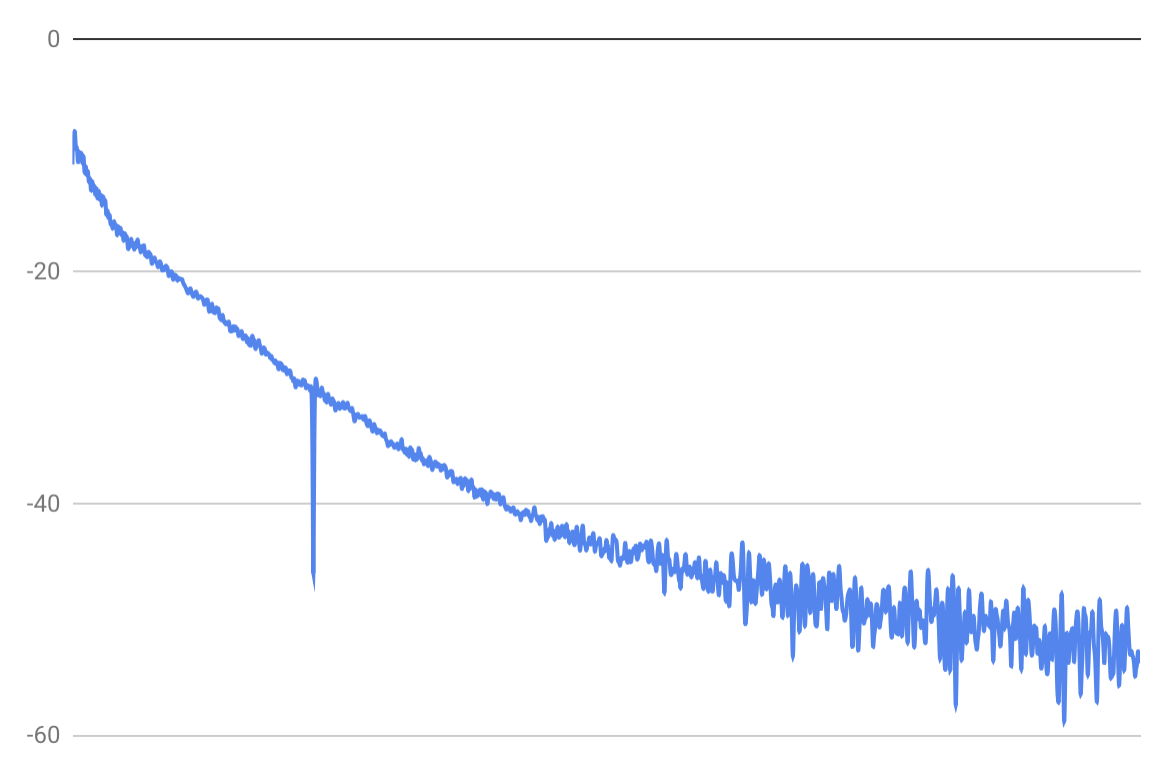 You can hold up a ruler to the screen, or the edge of your cell phone. You'll notice that there are some sections of the graph that kind of look linear: 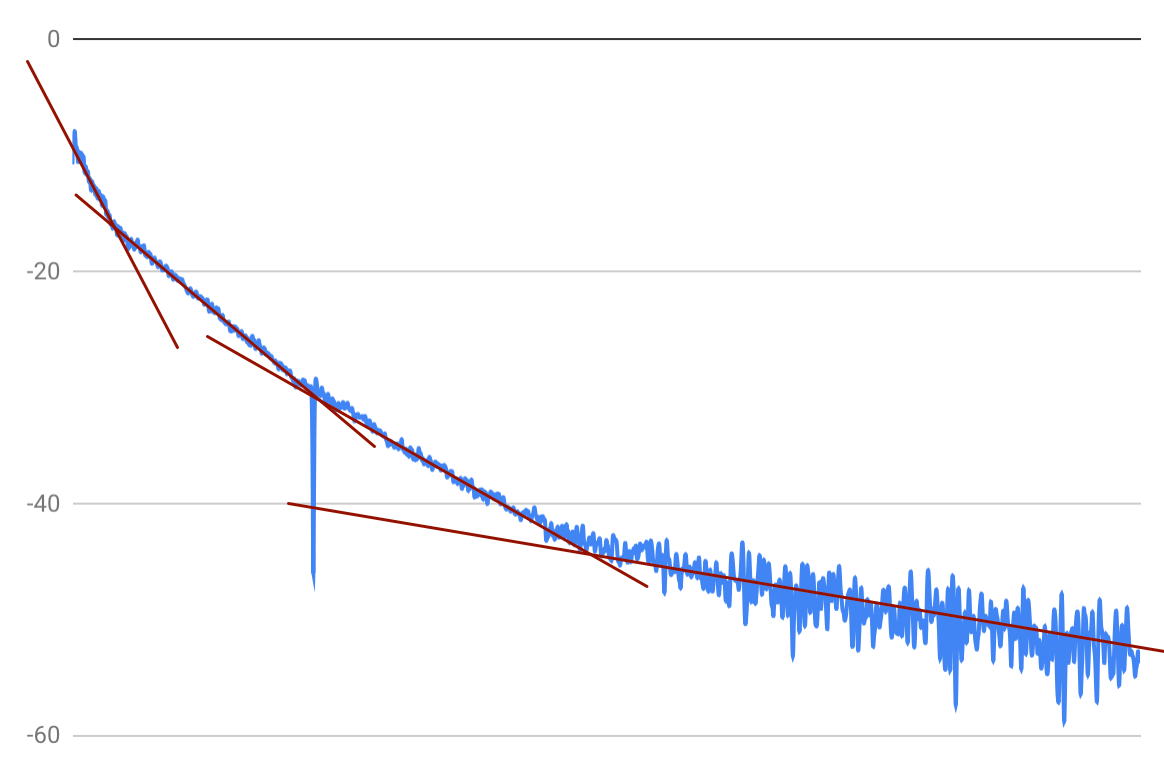 (Yes, you can try to approximate nearly any function with a piecewise linear one. But it actually makes sense here!)

The initial energy you put into a string is distributed between these different vibrational modes. However, due to the particular physics of the string, each of these modes will decay differently, and the energy will transfer from one mode to another.

If a particlar mode has a short decay time, then it will make the overall envelope steep at the beginning. If a mode has a long decay time, it will make the overall envelope shallow and long at the end. So, to make a more physically accurate envelope, you mix a steeper decay at the beginning with a longer decay at the end. The more accurate envelope will look something like, $$x(t) = \sum_{i=1}^N a_i \exp -b_i t$$

If you are not attempting to create a “true to physics” simulation of a string, this is where I might stop, but the decision of where to stop is somewhat arbitrary. There are a wide array of physical modeling synthesis techniques if you are interested in the subject. Karplus-Strong string synthesis is a fairly simple technique that gives good-sounding plucked string sounds, and many other techniques build on it by considering additional vibrational modes or adding nonlinearities to the system.

For more in-depth readings on the subject, I like the readings by Julius Orion Smith III at CCRMA.

I found a way to answer my own question. By looking at various .wav's of samples of string plucks (https://freesound.org/search/?q=guitar+string), it would appear that amplitude drop off is not linear, which would explain why my adsr release sounds so wrong!

I still can't tell if a harder string would make this curve sharper or more linear, but my guess is sharper. In terms of what I can hear/see, it's very hard to tell the difference between a sharper curve and a shorter release time.

Still, to answer two parts of my own question:

Not the answer you're looking for? Browse other questions tagged sound amplitude acoustics or ask your own question.

4
What is the best method for measuring of room reverberation time?
0
What is the reason for “random” spikes in amplitude of a guitar waveform?
4
Audio time stretching, without pitch shifting
2
What does Fast and Slow Time Weighting signify for real-time audio signal processing?
0
What to do for the right FFT in Matlab (two peaks and incorrect amplitude)?
0
why does the additive synthesis method for a triangle wave require amplitude scaling by 8/pi^2?