I am attempting to implement allan variance to determine the amount of bias that is shown in my IMU's gyroscope ( BMI160 ). I am doing this with the following formula, that was captured in the following tutorials: Tutorial 1 and Tutorial 2

From my reading, I am implementing the calculation using the following statements:

$N$ - Total number of bins that I've split my data into. ( Number of sample points per bin divided by total number of data points, without the remainder )

I then plot the ADEV ( Sqrt of AVAR ), over $\tau$, and see the following result:

What I see in that plot is that different axis have different bias instability levels. I did not collect hours of data to let the graph start rising again, like a true allan variance plot would. But for the purpose of this question, let's assume that the graph starts rising for each axis after the point i've selected on the graph. ( in the image )

According to this app note by Freescale: http://cache.freescale.com/files/sensors/doc/app_note/AN5087.pdf

which came from this recent related question: How to interpret Allan Deviation plot for gyroscope?

with a copied graphic below where they give the bias instability for each axis. What a specific manufacturer does on their datasheet, you would be best asking them directly.

Yes you would want to see a low bias instability, and I would think that the same number at a lower $\tau$ would actually be worst unless you were only concerned with doing a measurement over that short duration in time (implying the turn-up occurs sooner so that unit would then be drifting sooner and over the longer duration would be a lot worst). You ultimately want the lowest value at the further averaging time indicating the best long term stability, but depending on the process and use, there may be reasons to be concerned with shorter term stability as well such as if you were making difference reading measurements at 1 second intervals (then the 1 sec ADEV would be of interest). 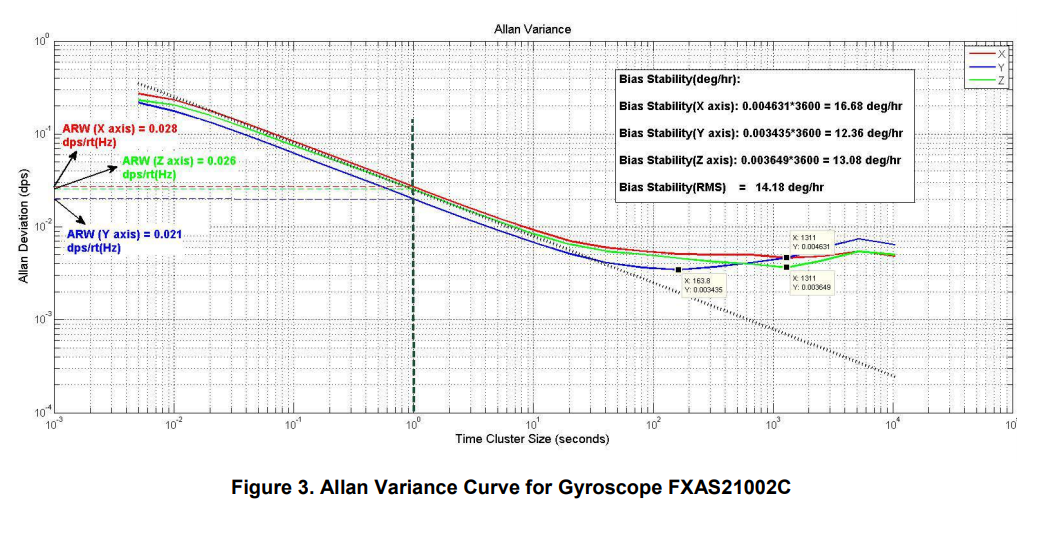 Not the answer you're looking for? Browse other questions tagged noise sensor adev or ask your own question.

4
How to interpret Allan Deviation plot for gyroscope?

3
Questions on the generation of R.O.C. curves
5
Recover Filter Coefficients from Filtered Noise
0
Finding correct values based on information from two arrays
1
Calculating SNR from Frequency-time domain
0
Removing white noise by taking the mean of many samples
5
Is Allan variance still relevant?