Extensively searching the space of all possible vectors of length $n$ to satisfy a (non-overdetermined) requirement is possible in principle. Hence, there is a way to calculate a complex FIR kernel of length $n$ whose magnitude response goes through $2n$ given points, when its phase response is allowed to be completely arbitrary. (Corollary, a real FIR kernel with $n$ given magnitude points and $n$ mirrored points can be calculated.) The extensive search method is hopelessly inefficient, though. Is there a practical way to calculate an FIR with such requirements?

The magnitude response (absolute value of the DFT) of $K$ will always match $M$ at the individual points $m_i$. Between these fixed points, however, it can attain very unintuitive and undesirable values. This undesirable behavior can easily be visualized by appending a large number of zeros to $K$ and then calculating the absolute value of the DFT. Changing any $p_i$ changes the behavior of the magnitude response of $K$ in between the $m_i$. Thus, two FIRs derived from the same magnitude spectrum $M$, but with different phase spectra $P$, can have very dissimilar magnitude responses. This is illustrated by the figure below: 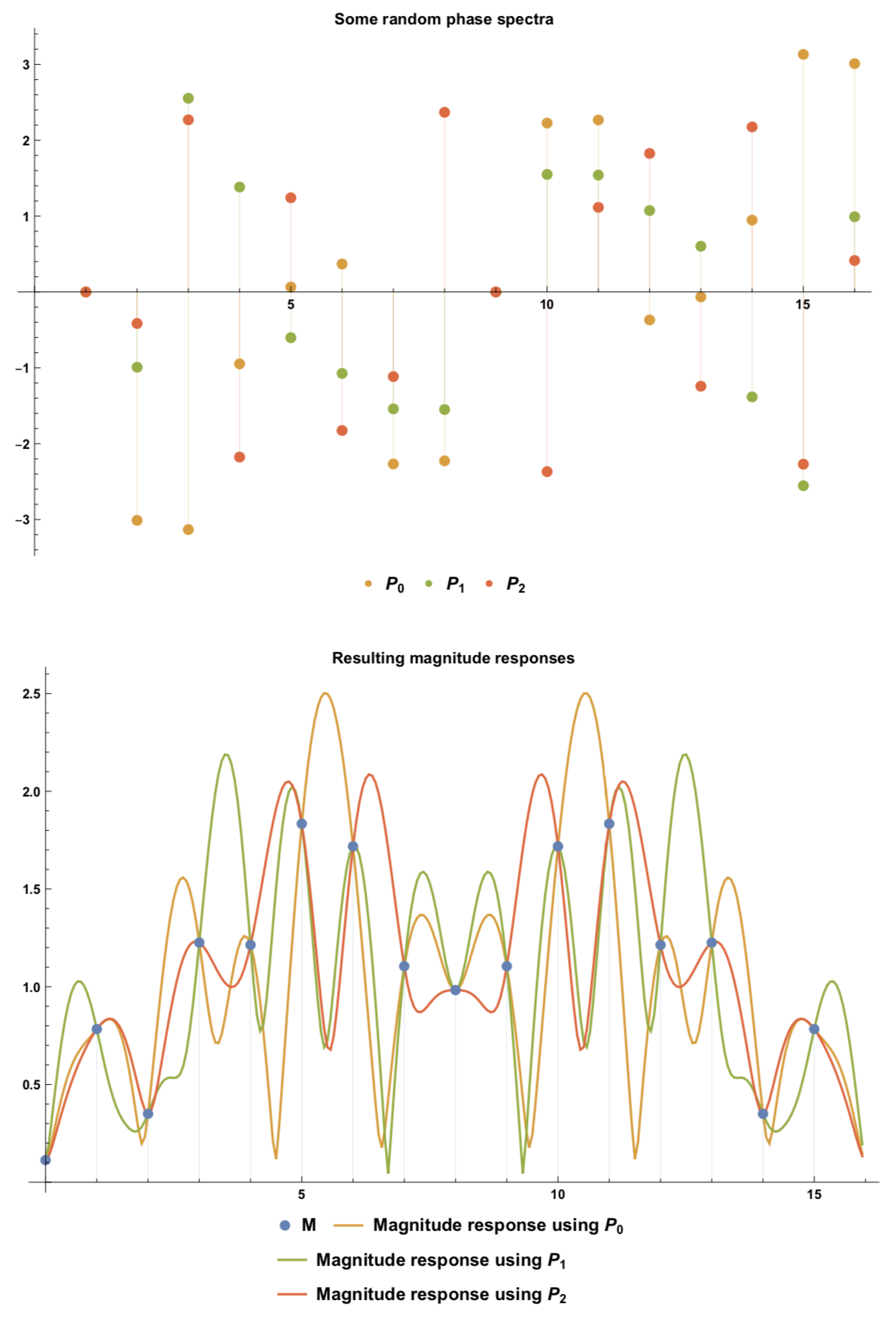 The upper plot shows three randomly chosen examples of $P$, called $P_0$, $P_1$ and $P_2$. The lower plot shows a randomly chosen example of $M$ and the resulting magnitude responses when an FIR kernel is formed using $M$ as the magnitude spectrum and one of the $P_i$ as the corresponding phase spectrum. $n$ was chosen to be $16$ here. The three magnitude responses all go through the fixed set of points defined by $M$, but vary considerably everywhere else, due to their different phase spectra.

Are my assumptions correct? Am I missing something? Is there any practical (polynomial complexity) way to do this?

This seems to come down to the question of wether a complex polynomial can feasibly be interpolated by a number of absolute value requirements. The coefficients of the FIR kernel $K$ define a polynomial in the complex plane and $K$'s frequency response lies on the unit circle. Any magnitude requirements are positions on the unit circle with a value which the absolute value of that polynomial is supposed to go trough. Consequently, I asked a more specific question on Mathematics Stack Exchange. If I gain any further insight from there, I will update or answer my own question here.

There are a few things that can make this easier

This is only a partial answer: There is not generally an FIR kernel of length $n$ whose magnitude response goes through $2n$ given points, as explained by this follow-up post.

When only $n$ points are given, the magnitude response between these points can still be altered by adjusting the phase (angle) at any of these $n$ points. It is possible to satisfy some additional requirements this way in some special cases, but, as stated above, it is not always possible.

Not the answer you're looking for? Browse other questions tagged fft audio phase fir optimization or ask your own question.

0
FFTW - Inverse FFT input data
3
Raised-Cosine Filter - calculating phase response
2
Minimum phase FIR method
1
Magnitude response and DFT normalization
0
Computing real signal with minimum absolute values from even magnitude spectrum
2
Generating a timeseries with an arbitrary power spectrum
0
Design of FIR Filters with Arbitrary Magnitude and Phase Responses
4
FIR design for arbitrary magnitude and phase: Why can I separate real and imaginary parts like this?
1
How to deal with the mirrored components of a FFT? And another question