How to count the number of threads in a bolt or nut using image processing?

How can I count the number of threads in a Nut with image processing?

This is a sample image: 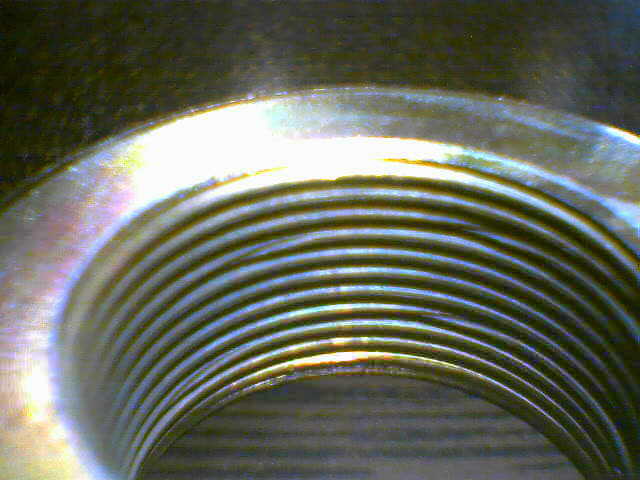 Update As I know I need to do these steps:

For example this is what I did for a bolt. I got a sample of a vertical line in the middle of the nut then plotted the data. But I don't know how to remove additional parts and count up and downs. 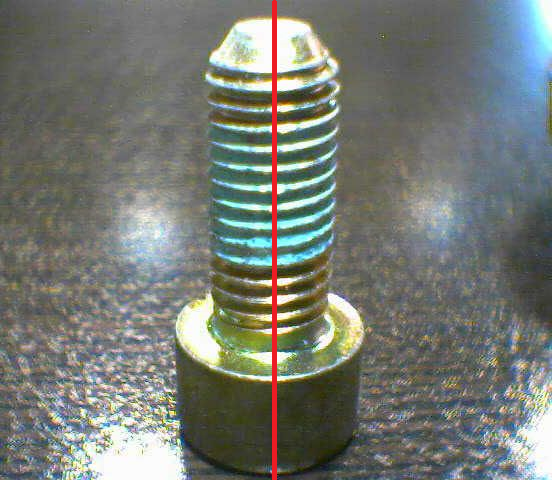 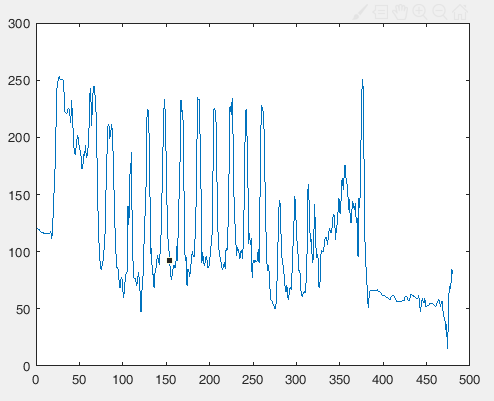 The most important thing in this problem is to be able to control the scene and more importantly:

The Lighting: Simply put, the lighting is what creates the essential contrast to delineate the thread. If you light the thread "head on" (light from the viewpoint of the camera), there will be no contrast or "ups and downs" to count. The better position for the light is at the top and slightly forward of the face of the thread so that a) All thread peaks are lit (both those that are on the top, but also those that are below them) and b) The top thread casts a bit of shadow to the one below it. Try to think of the thread as a difraction grating, only here, you need the shadows.

AFTER determining / fixing these parameters which are very important to the problem you are dealing with, you can start thinking about extracting the thread. If you get the imaging conditions right, the thread extraction via image processing will be much more easier and straightforward than trying to do it over any random image.

Trivial way of extracting the thread:

Assuming that the thread is aligned and centred within the camera's Field Of View (FOV), you are using something like Octave and the image has been loaded in I with something like I = imread('someNutImage.jpg');: 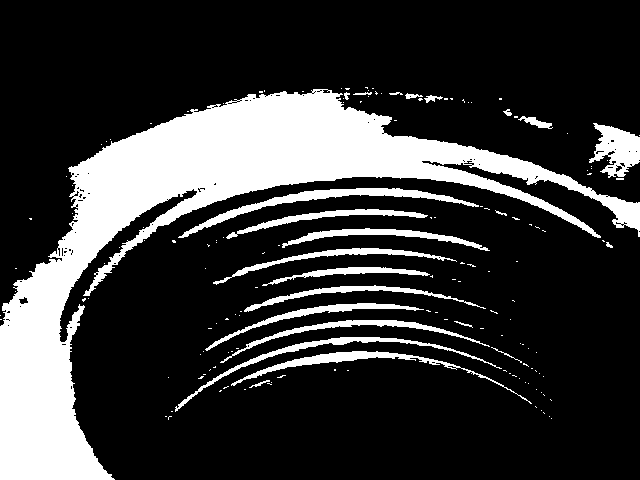 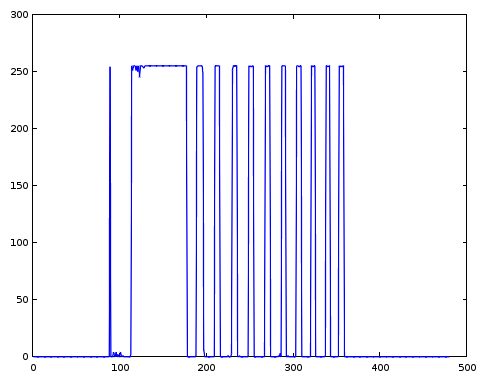 Notice here how the pitch changes visibly because of the camera angle.

For the signal I am using here, I get:

Of course, you are not going to "count the gaps" manually. At this point, you can do a histogram and obtain the two most frequent values. For example, with a hist(pulseLength,max(pulseLength)), you get something like: 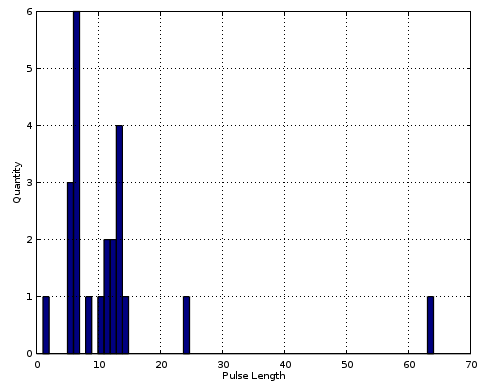 The above method allows you to filter (if required) the pulse lengths to get rid of various artifacts. Another way to extract the thread would be to use the Discrete Fourier Transform of Q to assess the frequency of the pulse train. 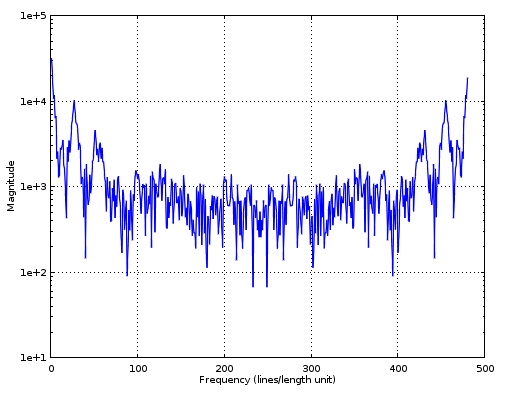 This image is 480 pixels tall. This means that the highest frequency (in terms of alternating black/white lines per unit of length) is 240. The first peak of the DFT occurs at 26 lines. From the method above we had ~13+~6=~19. The DFT will give you an average pitch over the whole acquired signal. Again, to give these numbers a physical meaning, you would need to know the pixel size which is only known by fixing the distance from the camera.

Even less trivial way of extracting the thread:

Once you threshold the image, either apply thining or a simple high-pass convolution mask to preserve the edges and then a Hough Transform. This will generate one "dot" for every slanted "line" that is created by the thread. What you would be looking for then would be a series of dots, one next to the other signifying the thread. By measuring the distance between these dots, you can extract your thread information. This is probably the most accurate method because the Hough Transform is very sensitive and accurate at recovering lines from very noisy images like the thresholded one we are talking about here. It is also the most computationally expensive option.

Each one of these methods has pros and cons for estimating the thread of a nut or bolt.

Finally, the most important part in such applications is to fix the imaging geometry so that you know what you measure and what sort of limits this measurement has.

The images attached here has the necessary functions of opencv to solve the problem you have posed here. The logic is that, keeping a reference line(like the red line you have drawn in the image present in the question), count how many times the intensity of the image changes either from 255 to 0 or vice versa. Dividing this count value by 2 will yield you the exact number of threads.

(I know, pretty late. But hope it helps somebody) 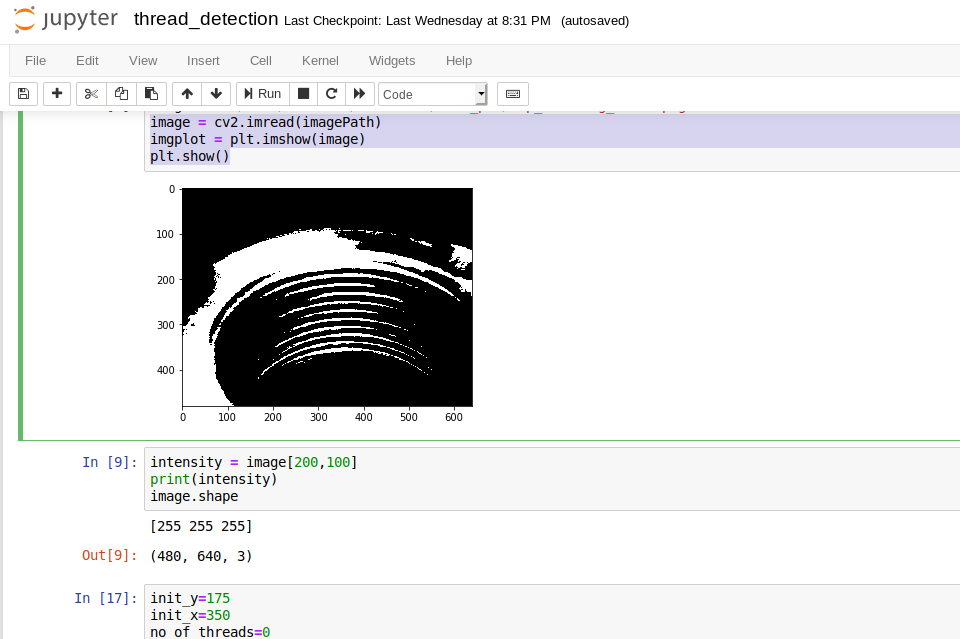 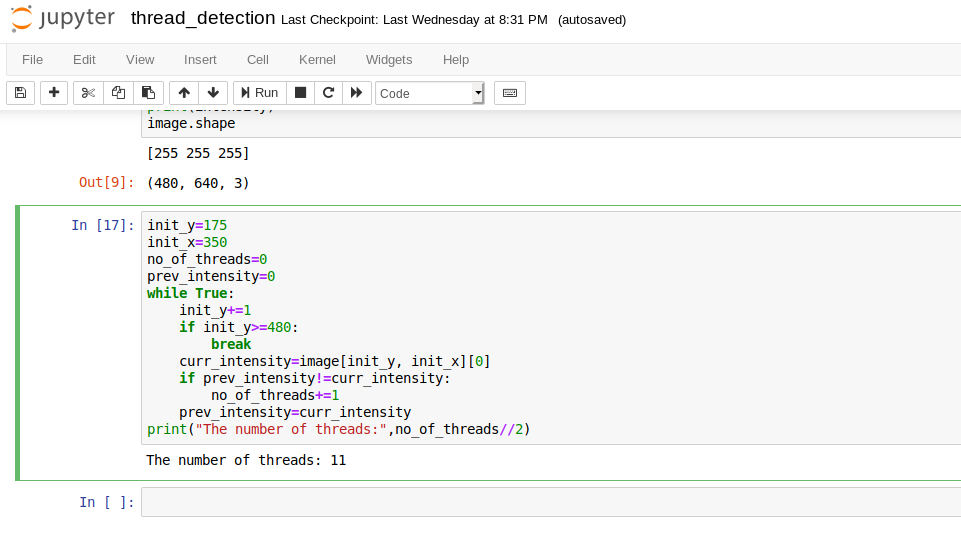 Not the answer you're looking for? Browse other questions tagged image-processing discrete-signals or ask your own question.