What is meant by a system's "impulse response" and "frequency response?"

Can anyone state the difference between frequency response and impulse response in simple English?

The impulse response and frequency response are two attributes that are useful for characterizing linear time-invariant (LTI) systems. They provide two different ways of calculating what an LTI system's output will be for a given input signal. A continuous-time LTI system is usually illustrated like this:

In general, the system $H$ maps its input signal $x(t)$ to a corresponding output signal $y(t)$. There are many types of LTI systems that can have apply very different transformations to the signals that pass through them. But, they all share two key characteristics:

Discrete-time LTI systems have the same properties; the notation is different because of the discrete-versus-continuous difference, but they are a lot alike. These characteristics allow the operation of the system to be straightforwardly characterized using its impulse and frequency responses. They provide two perspectives on the system that can be used in different contexts.

The impulse that is referred to in the term impulse response is generally a short-duration time-domain signal. For continuous-time systems, this is the Dirac delta function $\delta(t)$, while for discrete-time systems, the Kronecker delta function $\delta[n]$ is typically used. A system's impulse response (often annotated as $h(t)$ for continuous-time systems or $h[n]$ for discrete-time systems) is defined as the output signal that results when an impulse is applied to the system input.

Why is this useful? It allows us to predict what the system's output will look like in the time domain. Remember the linearity and time-invariance properties mentioned above? If we can decompose the system's input signal into a sum of a bunch of components, then the output is equal to the sum of the system outputs for each of those components. What if we could decompose our input signal into a sum of scaled and time-shifted impulses? Then, the output would be equal to the sum of copies of the impulse response, scaled and time-shifted in the same way.

For discrete-time systems, this is possible, because you can write any signal $x[n]$ as a sum of scaled and time-shifted Kronecker delta functions:

For continuous-time systems, the above straightforward decomposition isn't possible in a strict mathematical sense (the Dirac delta has zero width and infinite height), but at an engineering level, it's an approximate, intuitive way of looking at the problem. A similar convolution theorem holds for these systems:

where, again, $h(t)$ is the system's impulse response. There are a number of ways of deriving this relationship (I think you could make a similar argument as above by claiming that Dirac delta functions at all time shifts make up an orthogonal basis for the $L^2$ Hilbert space, noting that you can use the delta function's sifting property to project any function in $L^2$ onto that basis, therefore allowing you to express system outputs in terms of the outputs associated with the basis (i.e. time-shifted impulse responses), but I'm not a licensed mathematician, so I'll leave that aside). One method that relies only upon the aforementioned LTI system properties is shown here.

An LTI system's frequency response provides a similar function: it allows you to calculate the effect that a system will have on an input signal, except those effects are illustrated in the frequency domain. Recall the definition of the Fourier transform:

More importantly for the sake of this illustration, look at its inverse:

In essence, this relation tells us that any time-domain signal $x(t)$ can be broken up into a linear combination of many complex exponential functions at varying frequencies (there is an analogous relationship for discrete-time signals called the discrete-time Fourier transform; I only treat the continuous-time case below for simplicity). For a time-domain signal $x(t)$, the Fourier transform yields a corresponding function $X(f)$ that specifies, for each frequency $f$, the scaling factor to apply to the complex exponential at frequency $f$ in the aforementioned linear combination. These scaling factors are, in general, complex numbers. One way of looking at complex numbers is in amplitude/phase format, that is:

This is immensely useful when combined with the Fourier-transform-based decomposition discussed above. As we said before, we can write any signal $x(t)$ as a linear combination of many complex exponential functions at varying frequencies. If we pass $x(t)$ into an LTI system, then (because those exponentials are eigenfunctions of the system), the output contains complex exponentials at the same frequencies, only scaled in amplitude and shifted in phase. These effects on the exponentials' amplitudes and phases, as a function of frequency, is the system's frequency response. That is, for an input signal with Fourier transform $X(f)$ passed into system $H$ to yield an output with a Fourier transform $Y(f)$,

In summary: So, if we know a system's frequency response $H(f)$ and the Fourier transform of the signal that we put into it $X(f)$, then it is straightforward to calculate the Fourier transform of the system's output; it is merely the product of the frequency response and the input signal's transform. For each complex exponential frequency that is present in the spectrum $X(f)$, the system has the effect of scaling that exponential in amplitude by $A(f)$ and shifting the exponential in phase by $\phi(f)$ radians.

Bang on something sharply once and plot how it responds in the time domain (as with an oscilloscope or pen plotter). That will be close to the impulse response.

Get a tone generator and vibrate something with different frequencies. Some resonant frequencies it will amplify. Others it may not respond at all. Plot the response size and phase versus the input frequency. That will be close to the frequency response.

For certain common classes of systems (where the system doesn't much change over time, and any non-linearity is small enough to ignore for the purpose at hand), the two responses are related, and a Laplace or Fourier transform might be applicable to approximate the relationship.

The impulse response is the response of a system to a single pulse of infinitely small duration and unit energy (a Dirac pulse). The frequency response shows how much each frequency is attenuated or amplified by the system.

Aalto University has some course Mat-2.4129 material freely here, most relevant probably the Matlab files because most stuff in Finnish. If you are more interested, you could check the videos below for introduction videos. I found them helpful myself.

I have only very elementary knowledge about LTI problems so I will cover them below -- but there are surely much more different kinds of problems!

With LTI (linear time-invariant) problems, the input and output must have the same form: sinusoidal input has a sinusoidal output and similarly step input result into step output. If you don't have LTI system -- let say you have feedback or your control/noise and input correlate -- then all above assertions may be wrong. With LTI, you will get two type of changes: phase shift and amplitude changes but the frequency stays the same. If you break some assumptions let say with non-correlation-assumption, then the input and output may have very different forms. 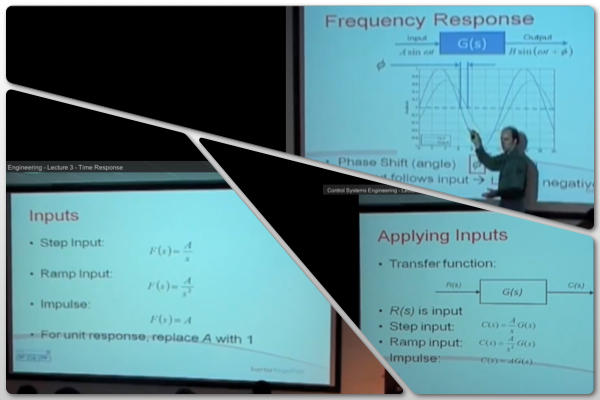 Not the answer you're looking for? Browse other questions tagged frequency impulse-response linear-systems frequency-response or ask your own question.