I have the following open loop transfer function for a unity feedback system.

1.When using RH criterion it can be easily proved that the closed loop transfer function is valid for $K>10$.

I don't understand why there is a difference. What am I missing?

The figures below show the traces of $G(s)$ for two different values of $K$ ($K=5$ and $K=15$). The traces show the behavior of $G(s)$ for $s=j\omega$ with $\omega$ moving from $-\infty$ to $\infty$. What is not shown in the plots is the path connecting the branches labeled $\omega=0^-$ and $\omega=0^+$. That path is a circle with an infinite radius moving clockwise $1.5$ times around the origin of the complex plane. That means that in the left plot, which corresponds to an unstable system, the point $-1+j0$ (the red cross) is encircled twice in a clockwise fashion. Consequently, according to the Nyquist stability criterion, the closed-loop transfer function has two poles in the right half-plane. The plot on the right shows the trace of a stable system. There is no clockwise encirclement of the point $-1+j0$, i.e., that point is always to the left of the trace.

Note that for the stable system (the plot on the right), the point where the phase of $G(j\omega)$ equals $\pm 180$ degrees, i.e., the point where the trace crosses the real axis lies to the left of $-1+j0$, i.e., it corresponds to a magnitude $|G(j\omega)|>1$. This means that the gain margin is negative even though the system is stable. Consequently, a negative gain margin does not generally imply that the system is unstable, and, vice-versa, form the left plot we see that a positive gain margin does not generally imply stability. 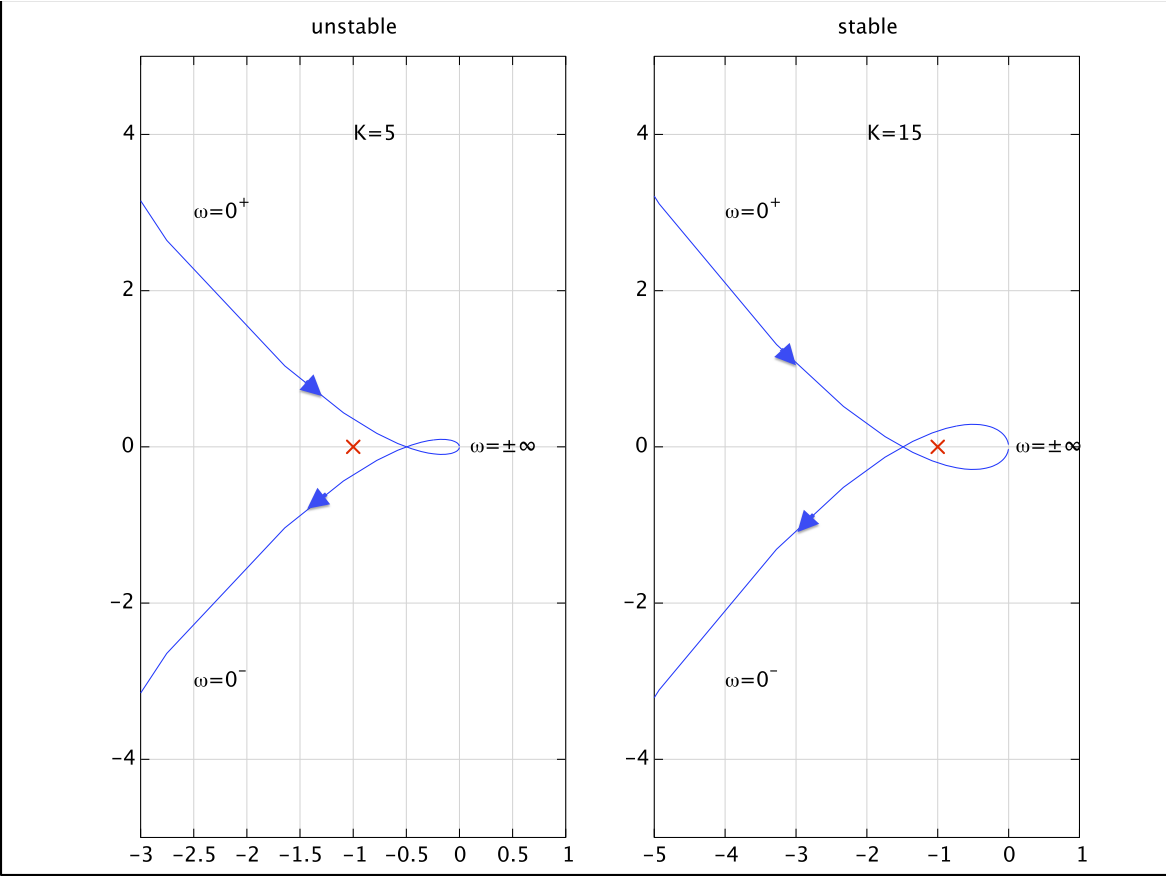 It can be noted that scaling the open loop transfer function by a constant $K$ then the Nyquist plot also gets scaled by this constant. When determining the closed loop stability this is equivalent to scaling the minus one point by $1/K$.

1
Analyze stability of a closed-loop system with Bode
3
How can a system be unstable if $L(j\omega)$ is never exactly $-1$?
1
Under what conditions do the phase margin and Nyquist criteria give the same results?
0
Measurement delay versus control delay
1
Determine stability of feedback system from open loop transfer function and Nyquist stability criterion gives different results
1
Root Locus, Transfer Functions and Unit Step Response?
0
Part 2: Root Locus, Transfer Functions and Unit Step Response?
3
Designing a Transfer Function with given requirements
3
How do you design using bode plots?