I am new to DSP and I'm working on the following problem.

We have a sound source in the far ﬁeld and a microphone array consisting of two microphones with distance d. We want to determine the source direction by using the cross-correlation of the microphone signals x and y.

I was told that in order to find the angle, we first need to calculte the time delay (in samples) between the microphone signals x and y. I know we can do this by finding the maximum of cross-correlation function R_XY. However, I don't understand why the global maximum of R_XY happenes at this time delay, namely k0.

Let's say we find this time delay. Then how do we calculate the angle? (assuming we know the distance between these two microphones, sound-propagation velocity and the sampling frequency.

With just two microphones you cannot distinguish a unique location on a plane, but you can resolve two possible locations (but your accuracy may be significantly degraded due to reflections/ multipath). This is demonstrated in the graphic below: 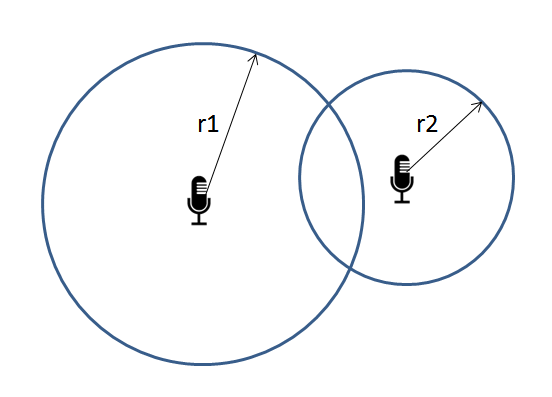 To uniquely determine the location of the source on a 2D plane, 3 microphones would be required. But if you have further information, such as you know the source is in front of you such that you only need to resolve azimuth angle from -90° to +90°, then one of the two points that are resolved can be neglected.

Therefore the solution is solving the for the x,y location given the simultaneous equations for two circles on a 2D plane:

As a reminder if needed such a solution is worked out here: http://www.analyzemath.com/CircleEq/circle_intersection.html

By the way, this is exactly how location is determined with GPS (triangulation) as depicted in the graphic below showing how a unique location on a plane can be determined with known range to three satellites: 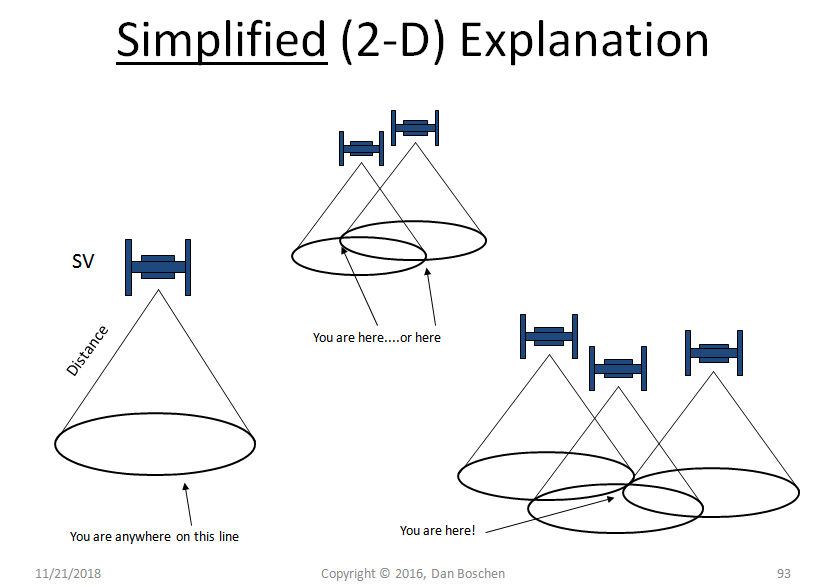 The graphic says "Simplified" as it is location on a 2D plane, but the explanation above using spheres instead of circles applies to determine location in a 3D space. Give the knowledge that the satellites are above, only 3 satellites would actually be required if we had accurate time as the other location in 3D space is in outer space so can be neglected. However, since we do not have sufficient time accuracy in the receiver, a 4th satellite is needed to determine that final unknown (thus with 4 satellites and 4 ranges to each we end up with 4 equations with 4 unknowns which can all be solved: x, y, z location in 3D space and time t).