What could be the discrepancies between theory and practice when implementing a proportional controller?

I implemented the following proportional controller circuit in practice.

The transfer function of the plant I uses is $\frac{20}{(s+2)(s+3)}$. Before doing the experiment, I plotted the root locus plot of the system.
Then after doing the experiment from the plots, the damping ratio was found using the 2nd order equations. During the experiments the gain of the circuit was changed such that different responses where obtained such as an under damped response. These were found by the finding the value of the peak overshoot from the plots. After finding the damping ratio, the new poles of the system were found and they were compared to the root locus obtained before.
They did not match exactly. I know that there could be practical errors such as mismatches in the resistor values in the ciruit, error when finding the overshoot amplitude from the graph etc, but could there also be some theoretical errors when using this system.

Since I am using the general equation of the second order system, could this have an effect, I know that the plant is second order but when considering the whole closed loop system, does this still apply?

There are no theoretical errors as you are simply describing a mathematical equation exactly. Also there are no actual 2nd order systems in the analog world due to real-world bandwidth limitations ("higher frequency" poles that we can typically ignore due to the dominant effects of lower frequency poles resulting in a reasonable estimate), and especially as your loop bandwidth increases, the effects of physical delays ($e^{-sT}$) in your system (which if you do the Taylor series expansion on that $e^{-sT}$ equation you see that it has an infinite number of poles!).

I found the following graphic useful in helping to understand the impact of the pole locations on the overall response (in particular to the point made above about "lower frequency" poles being dominant; the poles aren't actually on the frequency axis so the more accurate explanation is poles closer to the frequency axis are dominant where the frequency axis is the unit circle in the z-plane, or the imaginary axis in the s-plane as drawn below). Just look at a simple polynomial equation with two poles and you will see why it is "dominant" and how close a pole that is further out can be where it starts to matter based on the kinds of differences you are actually seeing. 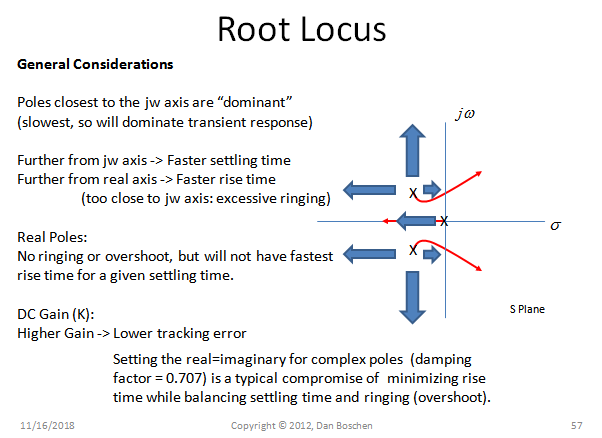 When we do have a system with two complex poles which are sufficiently closer to the frequency axis than any other ones, we can make the simplifying and well documented approximations of a second order system. These are approximations.

For the graphic above which is an example Root Locus (so the poles move on the red trajectories shown as we change loop gain) I have used the following approximations:

Case 1: When the pole on the real axis is greater than 10x (in the negative direction) the real value of the complex poles, the system is "second order dominant" and it can be reasonably approximated by the two poles alone.

Case 2: When the pole on the real axis is less than 10x (in the negative direction) the real value of the complex poles, the system is "first order dominant" and it can be reasonably approximated by the one real pole alone.

Case 3: For values in between I expect to have greater errors in either approximation and likely need to model it as a third order system (depending on the accuracy of the results needed).

Here's an example from James Kamman at Western University that also used a 10x criteria but shows the significance of that in more detail:

Not the answer you're looking for? Browse other questions tagged damping or ask your own question.