2 identical signals generated by the same PLL/VCO should have the same phase noise profile and their respective phase noises should be correlated.

Suppose one of them is delayed and I start sampling both simultaneously , if I now compare the phase noise of their respective samples taken at a certain time instance would the phase noise still be correlated? and if not how long would the delay have to be in order for their phase noise to be uncorrelated (if decorrelation is involved)?

My guess is that since phase noise has a trapezoidal shape and has a low pass filter frequency response, it is roughly the reciprocal of the loop BW that determines the length of the delay that would cause phase noise to become uncorrelated , the wider the loop BW i.e. the shorter the delay.

Does my reasoning make sense?

No, it has nothing to do with loop BW (as you stated that you are observing the final output, so it is the same signal at all offset frequencies; as a very simplified explanation the loop bw indicates the demarcation in phase noise components between the VCO and the reference frequency).

If the output of the PLL/VCO is the same, meaning we split it coherently into two outputs and observe both outputs with no delay between the two, then they will be completely correlated at all offset frequencies. However, if there is a delay between the observations of the two signals, the components of the phase noise at very small frequency offsets from the carrier will still be correlated, while offsets much further away from the carrier will be decorrelated. As the delay between the two observations increases, the "frequency corner" where we start to decorrelate will go down in frequency as given by the inverse of the delay. The corner frequency is the inverse of the delay (in radian frequency for delay in seconds), and the decorrelation for the phase noise component goes down as $1/\sqrt{f}$, where $f$ is the offset frequency from the carrier.

To determine the amount of correlation assuming the two waveforms have the same scaling (as long as there is no amplitude difference, which would apply if we simply delayed one of them as a delay does not change the amplitude), we can simply subtract the two and measure the resulting output power of the waveform (averaged detector). The amount of cancellation indicates the degree of correlation; if the waveforms are completely correlated at all frequencies we would see complete cancellation, and if they were completely uncorrelated at all frequencies we would see a summation in power (+3 dB). In the continuous time domain such a delay and subtract operation has a high pass response, as suggested by the equivalent filter of that process shown in the graphic below, where the frequency shown represents offset frequency from the carrier:

The frequency response to a noise process of the delay and subtraction operation, is given by:

(I believe the square root is included as I have shown since this is the result of summing random variables; given that independent random variables would add in variance, while the response is a magnitude quantity or the resulting standard deviation).

This shows the decorrelation intuitively, as components fully correlated would subtract, creating a cancellation, while the components fully uncorrelated, being random noise, would add in power (thus +3 dB higher). In terms of phase noise specifically this is clear when you consider a "slice" of phase noise at a a 3 Hz offset from the carrier (for example, as shown in the graphic below), represents a noise term that is sinsusoidally varying at a 3 Hz rate (at that given power level within 1 Hz of BW at that offset as given by the typical dBc/Hz scale of the vertical axis in phase noise spectrum plots). In comparison, consider a phase noise component from an offset of 0.03 Hz; that represents phase varying much more slowly (it takes 33.3 seconds to go through one cycle); surely you can see how even with a 1 second delay would still be quite correlated to this term, with a significant cancellation ratio (from such a subtraction). 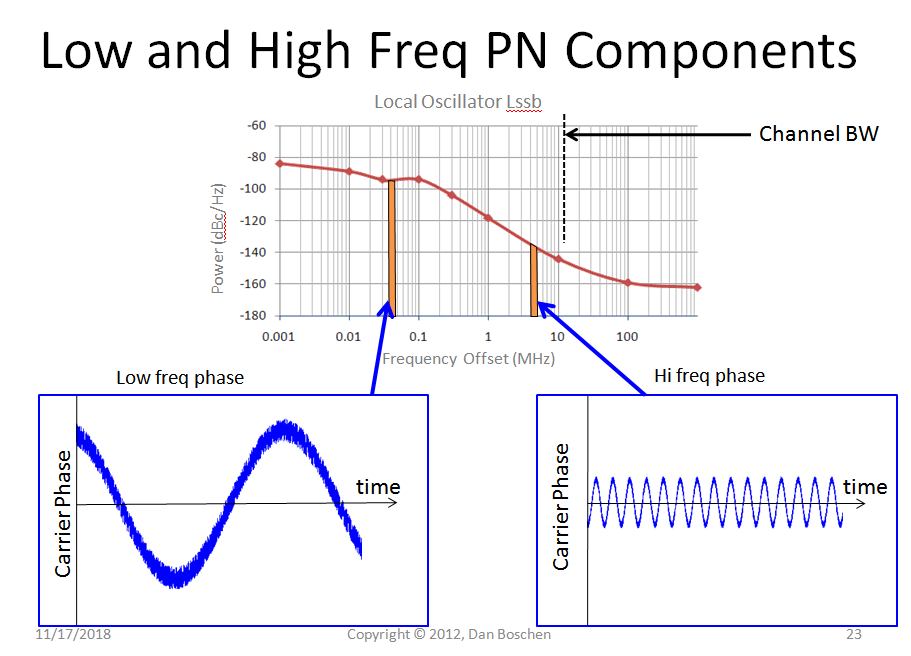 The graphic below is specific to a slide I have on explaining such considerations with regard to carrier tracking loops, however directly applies the the explanation above, showing the cancellation of the lower frequency phase noise offsets. 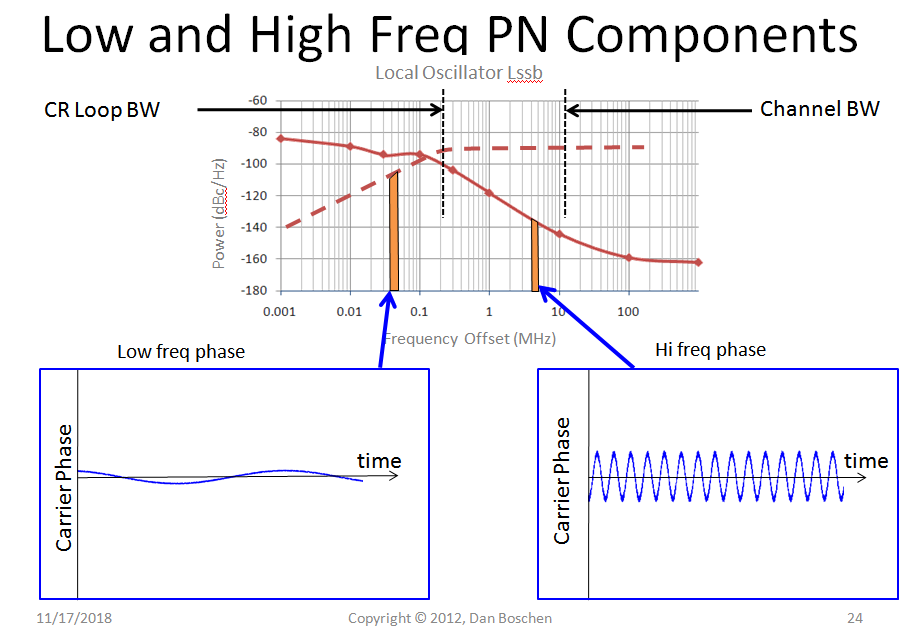 Relationship to Cycle-to-Cycle Jitter It is worth noting at this point how this explanation unifies the relationship between phase noise and cycle-to-cycle jitter; as the measurement of cycle-to-cycle jitter involves subtracting the rising edge of a clock signal from the previous rising edge; which is the block diagram in the first figure above where $\tau$ is the time duration of one clock cycle. Thus if you multiply the frequency response of that filter with the phase noise spectrum (to filter it), and then integrate to get the total rms phase noise, the rms jitter is found by converting phase to time based on the clock frequency used.