I just came from a class where the professor showed a slide with the definition of sampling: 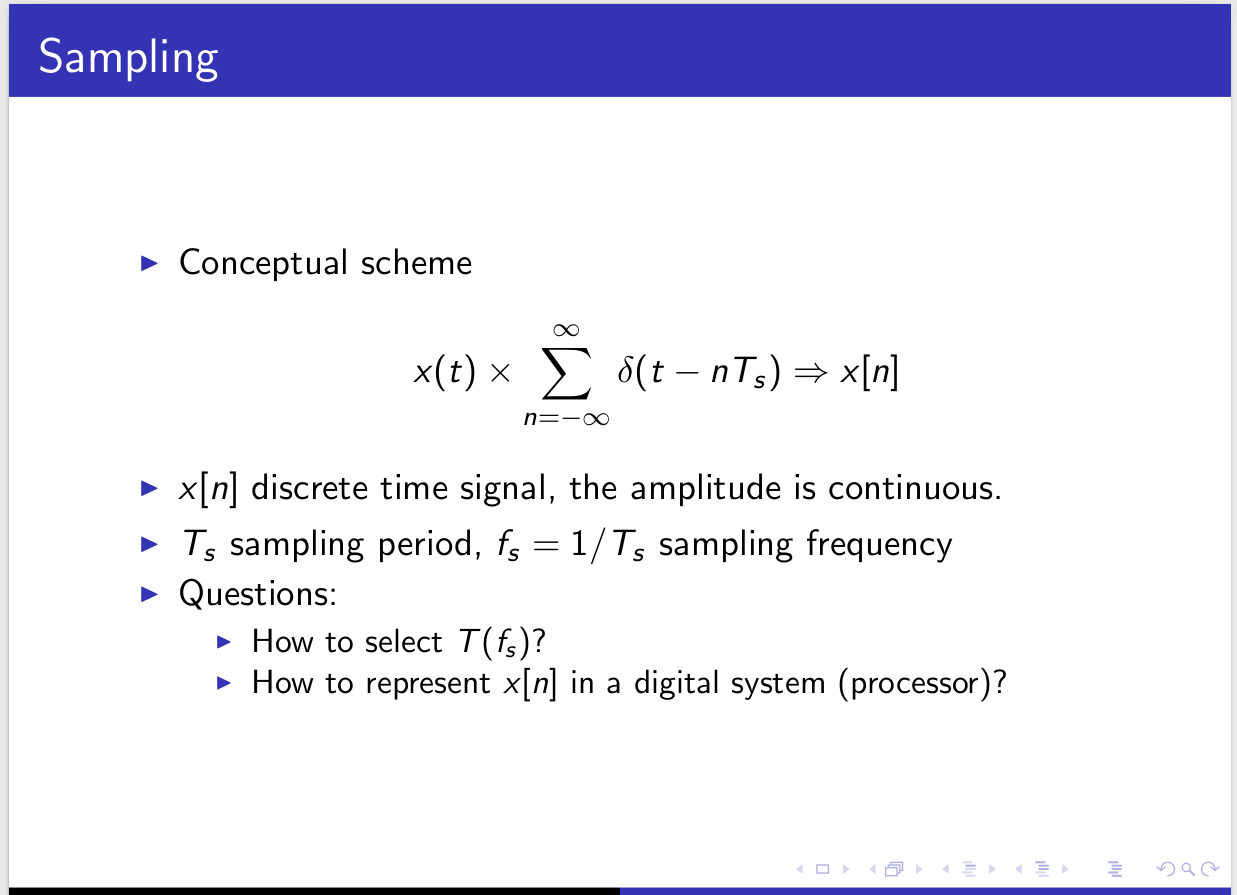 But I do not understand how we can multiply a signal $x(t)$ with the delta function $\delta(t)$, as the $\delta(t)$ is infinite at $x=0$. So this multiplication would amount to multiply a real-valued function with $\infty$ which is obviously not what is meant here. I think.

So would it make the formula formally correct if we would swap the $\delta(t)$ with the indicator function?

that equation following "Conceptual scheme" is misleading. the $\implies$ arrow is not an equal sign. this is what is true:

I think one important thing that you must understand is that a Dirac delta impulse is not an ordinary function that can be evaluated. So you do not multiply your signal with a value of $\infty$. What happens instead is that you weigh the individual shifted Dirac impulses with the corresponding values of the signal due to the following identity:

Consequently, multiplying a signal with a Dirac impulse train results in a weighted impulse train, where the weights are the signal values at the sample instants. So what happens is that from a continuous signal $x(t)$ you only retain the sample values $x(nT)$, but you still have an expression that can be considered a continuous-time signal (in the sense that it can be integrated or convolved with another function).

Note that this is just a mathematical model. As pointed out in Carlos Danger's answer, what usually happens is that this impulse train is filtered, i.e., you get

which is now an ordinary function which can be evaluated for any $t$.

In addition to the other answers, I would also like to point out that the "ideal" impulse sampler is usually considered to be followed by some filter of some kind, such as a zero-order hold. The infinite-amplitude spikes are "averaged out" by convolving with the filter impulse response.

Also, even without any filtering after the impulse sampling, the spectrum of the sampled signal creates a mathematical model for the aliased spectrum that is mathematically equivalent (up to a constant) with the periodic spectrum computed using the discrete-time Fourier transform (DTFT).

Not the answer you're looking for? Browse other questions tagged sampling or ask your own question.

12
Sampling of a continuous function: Kronecker's or Dirac's delta?
2
Sampling a Unit step function
9
Sampling the Dirac function
1
Why is the Dirac delta used when sampling continuous signals?
2
Sampling Theorem and Signals Explained to a Mathematician
1
Can an Delta Dirac function (not response) ever be sampled?
9
Quantization Noise for Coherent Sampling - Phase Noise?
5
implication of sampling and reconstruction theorem
0
function for sampling sine function