I'd like to duplicate the plot in the Wikipedia entry for Daubechies D4 scaling and wavelet functions: 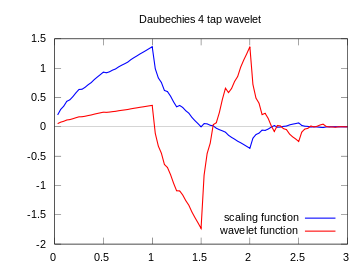 I don't have Matlab or Mathematica, and my question is not about hacking the curve, but rather understanding the recursion that generates it. So I wonder if it'd be OK to ask for some pseudo-code implementable in Python or R, basically following the steps in the cascade algorithm, or some breakdown of the steps involved. Ideally I'd like to be able to write some ad hoc code (possibly in R, Python or Octave) to get an idea of the complexity of the process, and the difference between the differences between the discrete transform and the continuous plots above.

I see that there are initial conditions, which are resolved as an eigenvalue problem, and coefficients already worked-up for D4; yet, there is no closed formula, and an iterative numerical process is carried out.

All of it rather complicated, and especially puzzling in its assumption of $\phi,$ apropos of which Strang mentions:

We never discover the exact value $\phi(\sqrt 2)$. It is amazing to compute with a function we do not know — but the applications only require the c's.

After the comment by @Maxtron (thank you!) and using this post on SE, I was able to replicate the plots above of D4 scaling and wavelet functions - well... with some change of sign of the wavelet function: 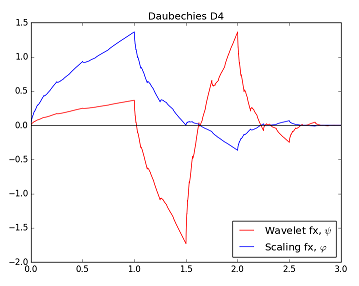 Browse other questions tagged wavelet or ask your own question.

3
How to remove/reduce noise by using the Morlet wavelet?
3
Morlet wavelet time and frequency resolution
2
Wavelet transform: How to compute the initial coefficients when only samples are available?
2
Perfect reconstruction: what properties must the analysis LPF satisfy
2
Biorthogonal Wavelet Expansion
1
General form of dilations and translations of wavelet function
2
Daubechies Wavelets in mulitresolutional analysis decomposition
0
Refinement equation and orthogonal wavelets basis
0
Scaling a wavelet in continuous wavelet transform