Estimating effect of filter on headroom

I am working with beamforming algorithms for speaker arrays. One of the problems we face is that we need to estimate the maximum amplitude of our test signals after we applied FIR/IIR filters to them. I am looking for ways to express the reduction in headroom that a given set of filters would give us. Ultimately I want to know by how much I have to attenuate my input signal to definitely avoid clipping in the DAC, with respect to the filter.

For sine sweeps, this is easy: The maximum of the filters magnitude response is also the maximum amplitude gain we can expect. However, for broadband signals, this is not as simple.

I considered adding up $N$ sine waves of frequencies $\omega_n$ covering the range of 0Hz - Nyquist. If my filter input signal consisted of sines with amplitude 1, the maximum amplitude of this "stacked sine" signal would be $y_{max} = N$.

Looking at an output signal of the filter, the same method can be used to estimate the maximum amplitude: This time, the amplitudes would not be 1 but $|H(\omega_n)|$ and the maximum output amplitude would be $\sum_{n=0}^{N-1}|H(\omega_n)|$.

My hope was that I may see by what amount I'd have to attenuate my broadband input signal to avoid clipping. The truth is that I'm really calculating the average of my magnitude response and that there are signals for which the calculated gain would produce clipping. Consider the following magnitude response, which is the result of a superdirective beamforming optimization: 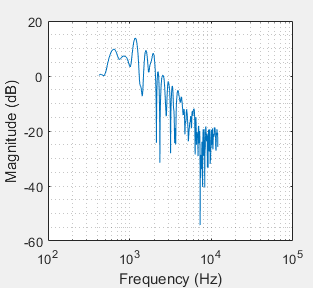 As you can see, the maximum gain is about 13dB, but my formula would return the average which is in this case -12.8dB. This tells me that there is an error in my thinking. Adding up the respective maximum values of all sine-components of a broadband signal should give me the highest amplitude this signal could ever reach, right? Apparently my approach in itself is wrong.

How could I better estimate the maximum amplitude gain of my filter for broadband signals?

In your particular case, I'd probably go with -10dB scaling with a limiter (provided, it's implemented in floating point). At the end of the day this is a trade off between managing clipping/overshoots, efficiency, signal to noise ratio and max output capability. It needs to be optimized within the specific requirements of your application

As mentioned in Hilmar's answer, without any extra information, the only scaling that guarantees no increase in signal amplitude is $l_1$-scaling, i.e., scaling by $\sum_n|h[n]|$, where $h[n]$ are the filter coefficients:

In practice, this type of scaling is often too conservative, especially for narrow-band signals.

Not the answer you're looking for? Browse other questions tagged filters audio processing-gain or ask your own question.