It is often said that a narrow band "in band" interferer will collapse and its BW will spread when it is correlated with a spreading code at the receiver of say a CDMA system while the signal of interest will pop up with a narrower BW (the data BW), and thus could be filtered and that is what is called processing gain.

However, in order for this to take place the code at the receiver needs to be aligned in time with the incoming signal of interest.

The CDMA Receiver would give you the jamming resistance as you described it. A certain post correlation SNR is required for acquisition per system design requirements (for example that may be 10 dB SNR). The ratio of the spreading bandwidth versus the data bandwidth gives you the processing gain as you described; so if you had 40 dB processing gain (for example), you could withstand a narrow in-band jammer that is 30 dB stronger that the received spread signal, resulting in a post correlation SNR of 10 dB.

This is further explained below in the context of one method for timing acquisition and tracking in a CDMA Spread Spectrum Receiver, specifically the Early - Late gate method as it is fairly straightforward. (Note we are also concerned with Carrier Tracking, but given that is not your question let us assume that the carrier offset is being tracked, so the waveform of interest for this discussion has no carrier offset).

Assume such a baseband waveform with the carrier offset removed as a complex signal sampled at 2 samples per chip as shown in the diagram below: 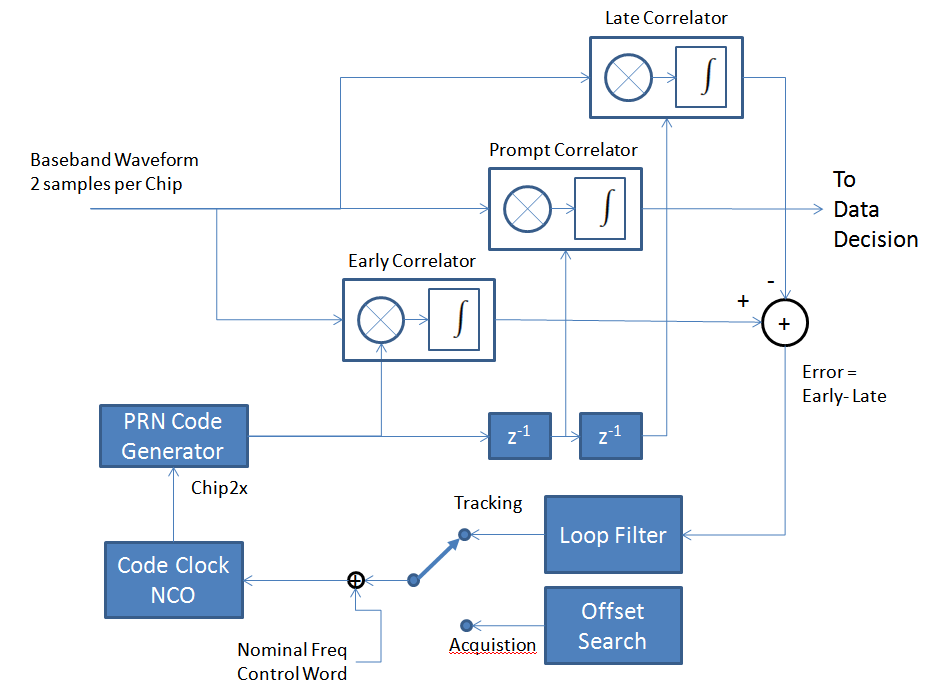 There are three correlators shown (Early, Late and Prompt) and each performs a multiply, accumulate and dump, and magnitude detection on the correlated output, resulting in a magnitude versus code offset according to the following response:

In acquisition mode, implying we do not know the timing offset (so could be any offset over the duration of the full symbol), the switch shown in the upper diagram is connected to the Offset Search box, which in this case generates a very small offset that is added to the nomimal frequency control word to the Clock NCO (which nominally sets the chip clock to be Chip2x, or twice the chip rate), resulting in a timing offset ramp (the code starting position will sweep slowly relative to the incoming waveform's synchronized position). A threshold detector on the prompt output (not shown) would make a decision (with all the usual probability of false alarm vs probability of detection considerations) that the signal was acquired, seed the Loop Filter output with the current frequency control word and switch the system to Tracking.

[With that context, now your question]

Consider the case of a tone jammer. The correlator output in the diagram above is the signal output after the processing gain. Not shown is the background noise, but you can imagine the horizontal line to be noisy. A typical post processing acquisition threshold is approximately +10 dB SNR (this is again specific to probability of false alarm vs probability of detection design criteria and can be made much more sensitive by having many successive success detections before we decide to switch to tracking). If we have a spreading code with 40 dB processing gain (this would required the number of chips to be 10,000), then this would imply that we could still acquire in the presence of a single tone jammer that was in the middle of our band and 30 dB stronger than our signal, as received.

Once acquired it is important to understand how we can maintain tracking to the desired time offset. To complete the description, once in tracking an error signal is derived from the Early and Late Correlator Outputs, which are each spaced 1/2 a chip from Prompt.

Below shows the results for the Early, Late and Prompt Correlator outputs when there is zero time error.

And below shows the outputs when there is a timing offset such that the Early-Late computation results in negative error. For a simple first order loop, this error can be simply scaled (for loop gain adjust) and added to the Nominal Frequency Control Word. Higher order loops can also be implemented by design in the loop filter. 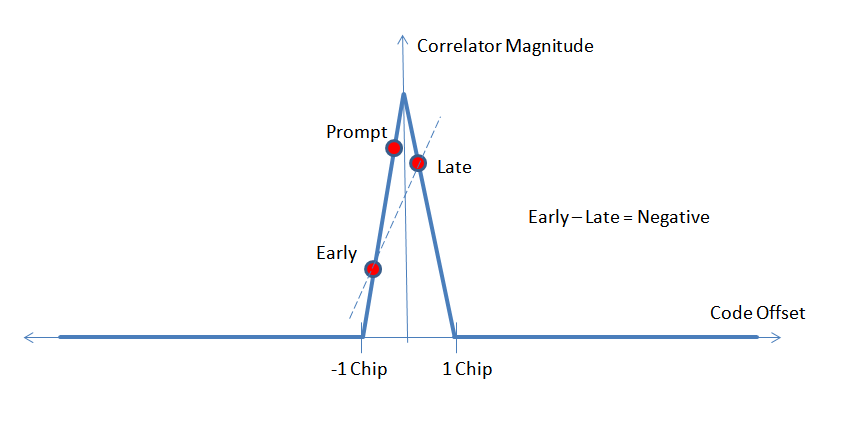 Note: We assumed the carrier offset was removed. The Complex Prompt Correlator Output can be used as part of the carrier tracking loop using the cross product frequency discriminator based on estimating the frequency offset from as follows:

2
Use of equalizers in communication systems for Intersymbol Interference
1
How to correct for delays in a PAM-X signal with orthogonal CDMA?