Spectrum of Cosine in Complex Form

The complex exponential form of cosine

The trigonometric spectrum of $\cos(k \omega t)$ is single amplitude of the cosine function at a single frequency of $k$ on the real axis which is using the basis function of cosine?

Appreciate your advice, thanks.

When the functions are observed in the time domain (meaning how the function is changing versus time instead of versus frequency as used above) we can represent them as you suggest in terms of sine and cosine components in quadrature. This specifically is a phasor representation; for more detail on that see my explanation on the end where I use the phasor representation to help explain negative frequencies. (There is no reason we can't use phasors to show functions in the frequency domain as well; it would be a 2 dimensional plot showing the magnitude and phase versus frequency instead of versus time- how it is plotted really comes down to what is the best way to convey the information given the function at hand).

Note since $\omega$ is a continuous function in this context (we are solving for G as a function of $\omega$), there are an infinite number of actual basis functions as the FT is an infinite-dimensional space.

If we applied that in this case, with $\omega$ and $k$ as independent variables, we get the following result:

The amplitudes represent the areas of the impulses given and shows that the Fourier Transform can be given as a function of k alone in this case (since there is no dependence on $\omega$):

We could show this as a surface plot of the magnitude for all values of $k$ and $\omega$ as shown below, with the dashed line representing infinity, which is where an impulse would occur versus k for any fixed value of $\omega$: 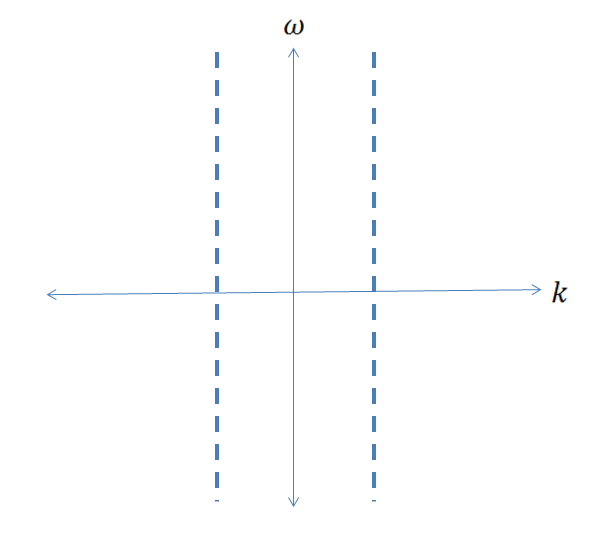 Thus for all $\omega$ we would obtain the following magnitude spectrum as a function of $k$ alone:

product of kw as the independent variable

If we decide to make the frequency axis be the product of $k \omega$ (since the frequency of the cosine function is given by that product), we can simply multiply the result given above by $\omega$ to result in the following magnitude spectrum:

We can similarly choose to make $\omega$ be the independent variable and would result in impulses at $\omega = \pm \frac{\omega}{k}$. All of this is in agreement that it doesn't matter what $\omega$ is, in all cases the result is an impulse in the "k domain" when k = $\pm 1$.

Further Background on the FT of the Cosine Function

The following may help provide further intuition for those familiar with the Fourier Transform of a cosine function.

What the amplitudes represent is clearest in the case where the frequency term $k\omega$ is held constant, and we define another variable such as $\Omega$ to represent all possible values of $k\omega$, as in that case the Fourier Transform (FT) of a cosine function is simply two impulses in frequency, one at a positive frequency and the other at a negative frequency.

To show this first in general, I will use capital omega $\Omega$ to avoid confusion with the $\omega$ in your formula to represent in general any angular frequency ($\Omega = 2\pi f$), and $\Omega_o$ to represent a specific frequency.

And we can see how this relates directly to the general relationship from Euler's identity expressing the real sinusoidal cosine in terms of two complex exponential frequencies:

And with that we see how when we use the FT to correlate to $e^{j\Omega t}$ the result is two impulses, as when we set the frequency to either of these values $\pm \Omega_o$ the integral given by the FT above goes to infinity since $e^{j\Omega_o}e^{-j\Omega_o}=1$, but would integrate to zero anywhere else.

As a plot vs frequency this would appear as follows showing two impulses that exist at the positive and negative frequency $\Omega_o$. This is a magnitude plot, and typically to be complete a phase plot would also be shown (showing the phase versus $\omega$), but in this case it is trivial since the phase is 0 at both impulses:

Or with $k\omega$ variables, showing the magnitude spectrum that would result with both $k$ and $\omega$ as constants:

This relationship between the frequency and time waveforms as I have shown them applies for when $\Omega_o$ is a constant, otherwise we will be dealing with arbitrary modulation functions and would need to know the modulation waveform specifically (how the independent variable is changing with time) to determine the frequency spectrum.

To further understand the meaning of a negative frequency, which is applicable to angular frequencies by definition, note that a negative frequency represents a single exponential frequency given as $e^{-j\omega_o t}$, with $\omega_o$ in this case any positive number. It may be helpful to visualize this with reference to the relationship I gave in the first paragraph, showing $e^{j\omega t}$ in terms of I and Q components. To give negative frequencies a physical interpretation, we can plot the function of $e^{j\omega t}$ as a function of its real and imaginary components versus time resulting in a phasor representation, specifically the plot will map out a unit circle, and rotate around the origin at rate $\omega$ as depicted below. Here we show the angle increasing in a positive direction with time, and thus this represents a positive frequency (A negative frequency would be depicted by instead having the phasor rotate in a clockwise direction): 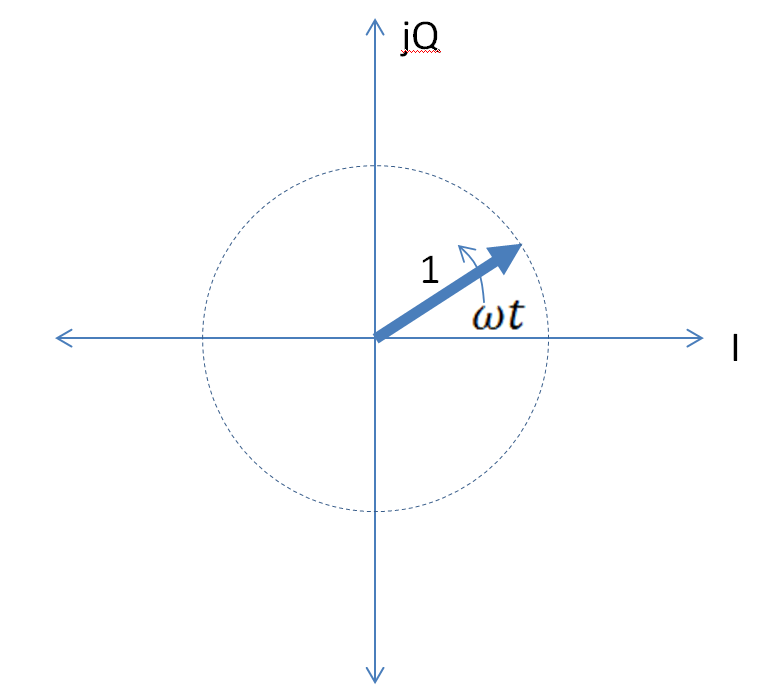 If this is still not clear, it may be helpful to know that the form $Ae^{j\theta}$ is identical to $A\angle \theta$

If you take the Fourier Transform of a specific exponential frequency with frequency term $-\omega_o$ given as $e^{-j\omega_o t}$, the result is a single impulse at that frequency: $\delta(\omega+\omega_o)$. (While as we showed above the cosine function has two exponential frequencies; a positive and a negative).

This is clear from the plot below showing both $Ae^{j\omega t}$, and $Ae^{-j\omega t}$ as complex phasors rotating around the origin with time (magnitude A and angle linearly proportional with time as $\omega t$ , which is by definition a constant frequency since $f = d\phi/ dt$). The dotted line shows the result of summing those two phasors at any instantaneous time t, showing as long as the two phasors are related by a complex conjugate (equal magnitude opposite phase) the sum will be on the real axis and thus will be a real function with no imaginary components. 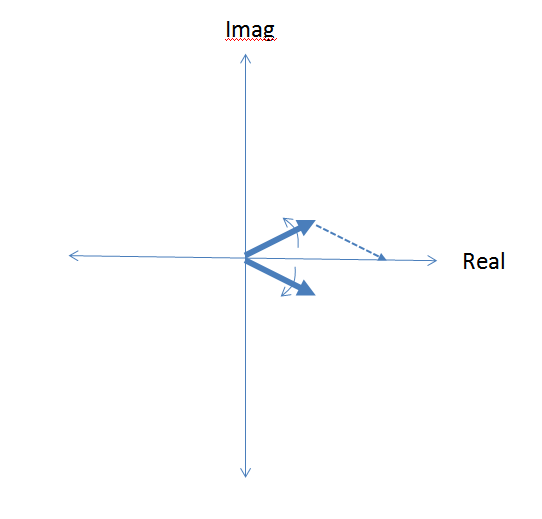 Dilation Property of the Fourier Transform

Not specific to your question but worth mentioning since that is occuring here is the dilation property of the Fourier Transform (scaling the independent variable by a constant term k) which has the following general relationship:

Not the answer you're looking for? Browse other questions tagged frequency-spectrum fourier-series complex or ask your own question.

0
Determine spectrum amplitudes for half-wave rectified sine
0
Relation between a Fourier series harmonic component and its power
2
Effects of interchanging sine terms with cosine terms
4
FFTs of a complex signal - separating the real and imaginary parts
3
Spectrum analysis of a function
5
Discontinuities in the FFT
3
How the FFT takes a cosine or sine and outputs the frequencies of the complex form?
0
Why complex signal has no imaginary spectrum
0
Complex signal sine reconstruction