What do the Contour Levels Produced by Matlab Function Contourc Represent

I have been trying to understand what the contour levels are.

Matlab docs state that the contourc function takes an argument that determines the levels upon which the contours are computed.

I wanted to try that out, so I constructed a picture with $10$ rectangles, each of which has a distinct depth starting from $0.1$ ending up at $1.0$, and I ran the contour function to see the highlighted contours according to the specified levels in the input, but the results weren't expected.

For instance, I ran the code on $0.1$ contour level and the contour function produces all the contours in the picture, not only the ones with $0.1$ level. 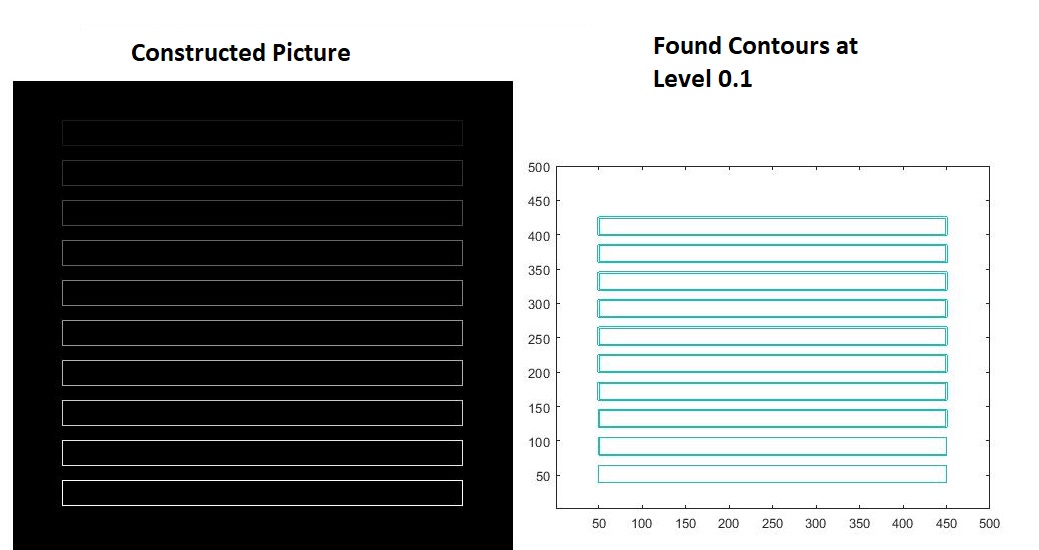 Here is the Matlab code used to construct the picture and find its contours:

I'd be so grateful if someone could clue me in.

I constructed a picture with 10 rectangles, each of which has a distinct depth starting from 0.1 ending up at 1.0

I ran the code on 0.1 contour level

12
What do the filter coefficients in a digital filter represent?
4
what is the starting point of a contour as given by cvConvexityDefect() function in OpenCV
15
Image segmentation issue of different materials
0
what is the theory behind matlab butter function?
4
What Do Skewness and Kurtosis Represent?
1
How to represent impulse function in 2D?
0
What does this notation $g(x) = S\{\delta(t) \}(x)$ mean?
0
What do the 1D filters represent when using imfilter?
2
Reduce the Number of Intensity Levels of a Grayscale Image in MATLAB