how to create a harmonic mask from fundamental frequency?

Using an algorithm that gives the fundamental frequency across time, example https://www.mathworks.com/help/audio/ref/pitch.html (or some other one?)

how would I then use that, to create a harmonic mask of nHarmonics based on that fundamental frequency? So the mask will contain the f0 + nHarmonics harmonics.

The point of this mask will be to then use it as a filter for the audio mixture.

I want to do this using MATLAB.

edit: I forgot to mention that the f0 is not a constant value, it is a ranged f0 track from fmin to fmax, for example dominant f0 from 100Hz to 800Hz. So the f0 track contains different values, not just one value. I can understand a comb filter working for one value, but this is a bit more complex, as the f0 track has multiple different values, so now each one of those would have to have nHarmonics multiples above the f0 for me to create this harmonic mask.

See this post which describes creating a notch filter using a delay and add:

The filter used is generically given as

This results in passing DC and placing zeros at the normalized radian frequency locations given by:

for all integers n and $\omega_n$ in the range of 0 to $2\pi$ to correspond to the primary frequency range of DC to the sampling rate.

This comes directly out of factoring the polynomial given by H(z), resulting in zeros on the complex unit circle at the angular frequencies given above. Because of the extra $\pi/N$ rotation on the unit circle, this filter works well for filtering odd harmonics based on prudent choice of N and therefore the sampling rate as an integer multiple of the notch location.

If instead a delay and subtraction is used:

The result would be a zero (notch) at DC and and placing zeros at the normalized radian frequency locations given by:

Which comes from factoring $H(z) = 1-z^{-N}$ which results in the Nth roots of unity (zeros evenly spaced around the unit circle). This approach conveniently allows for placing a notch at every harmonic of a selected frequency. To introduce the more advanced approaches given below, it is useful at this point to visually plot the zeros in the z domain for this case, using the example $H(z) = 1- z^{-8}$, along with the associated frequency response: 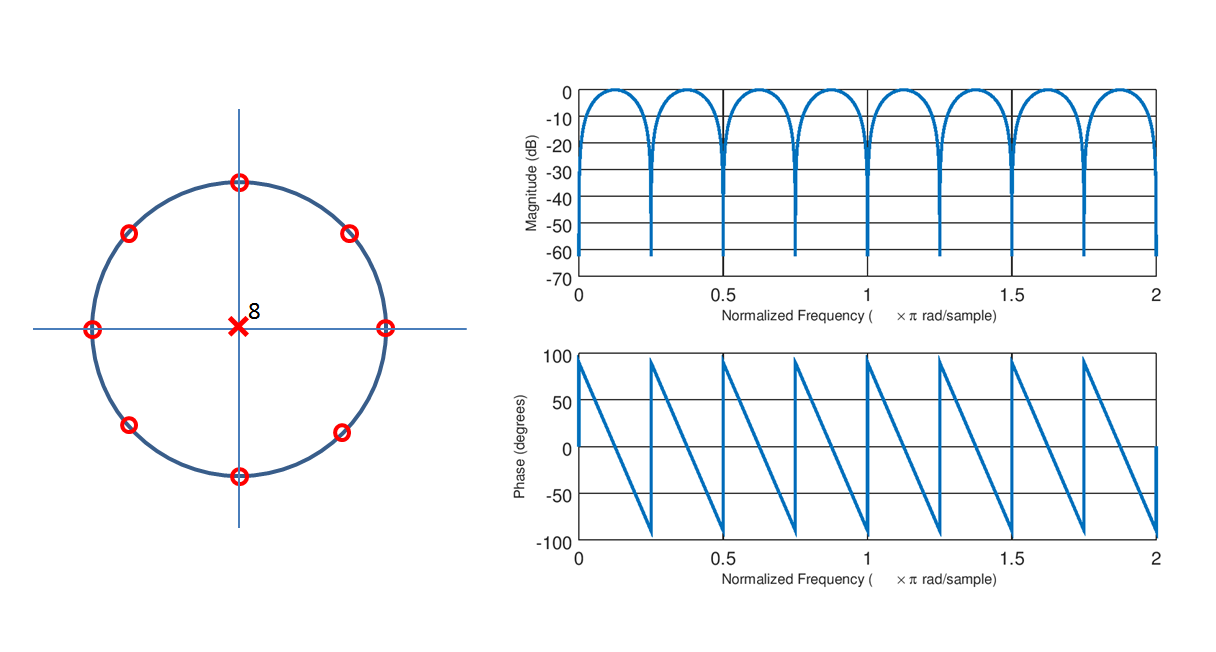 Both of these approaches are referred to as "Comb Filters" and notice in this case how the notch occurs at a fundamental frequency and every integer multiple of that frequency. The requirement here is the sampling rate be an integer multiple of the notch frequency. The filter has linear phase which is important if phase distortion is of concern, but a potential drawback is the gradual loss in frequency components at other than the distinct harmonics.

An improved approach for the amplitude response would be to extend the concept of the second order notch filter which I have derived at this link given below.

This will result in much flatter amplitude response over the pass frequencies, but the tight notches come at the cost of increased phase distortion in proximity of the notches which may be an issue depending on the application.

Which has a zero at $z=1$ and a pole placed inside the unit circle at $z = a$ in close proximity to that zero; the closer the placement the tighter the bandwidth but also the more precision (bit size) is required to achieve the desired performance and maintain stability. Notice below the comparison to a single zero as done in the Comb Filter implementations (with $N=1$) to an example case of the DC notch filter ($a=0.95$ for the example shown): 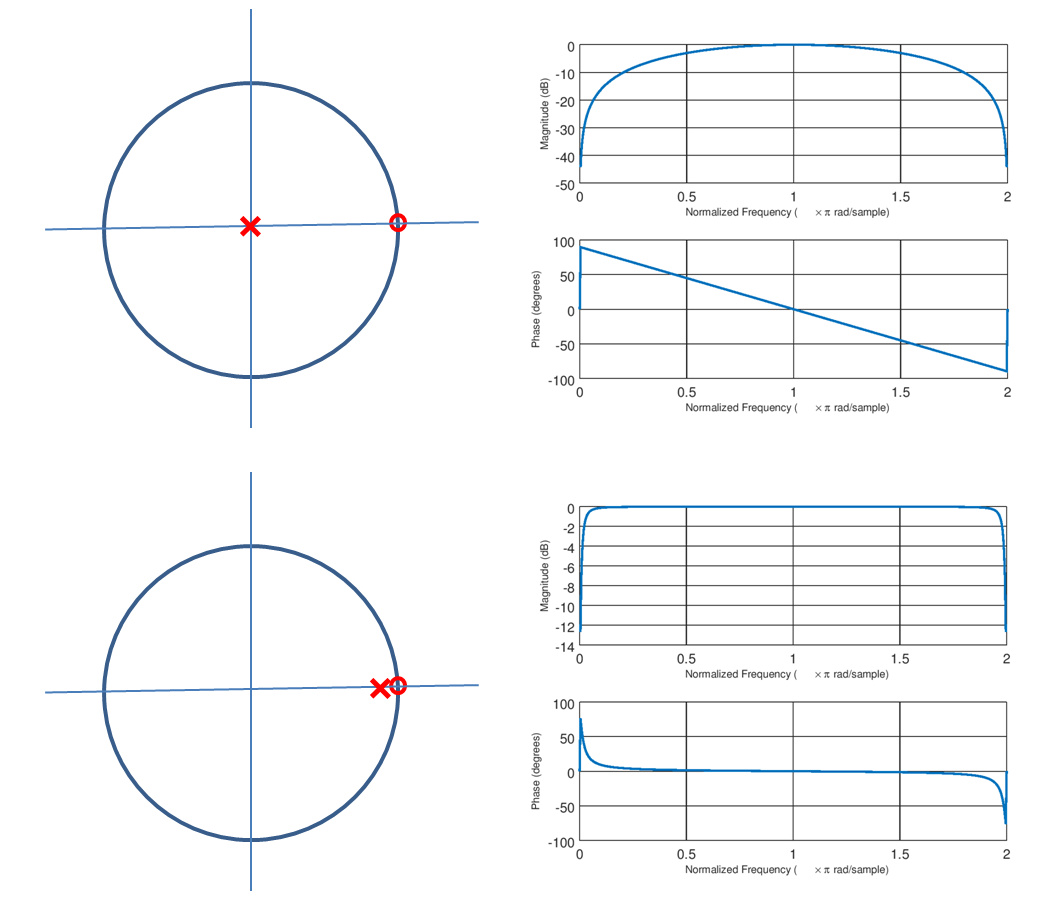 At this point you may see where I am going with this. We can combine the concept of the DC Nulling filter with the comb filter to achieve tight notches at integer harmonic locations by placing poles in close proximity to the zeros given in the Comb Filter example as depicted in the graphic below. 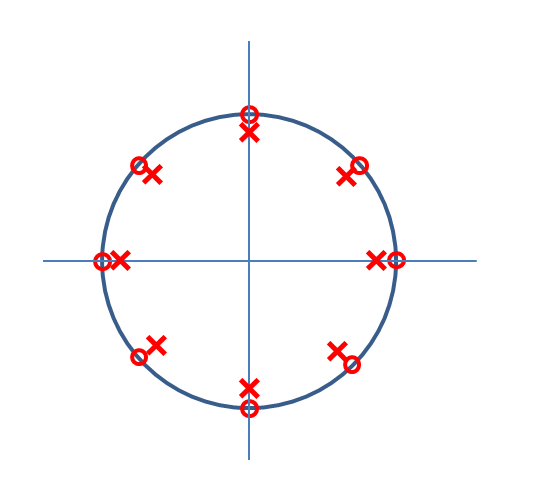 Following similar polynomial factoring relationships into the complex plane, this is realized with the following transfer function below:

The amplitude normalization factor K if desired is determined by solving for the value in the passpand $H(z=\omega_n)$ where $\omega_n = \frac{2\pi n}{N} + \frac{\pi}{N}$ and inverting this, which ends up being: 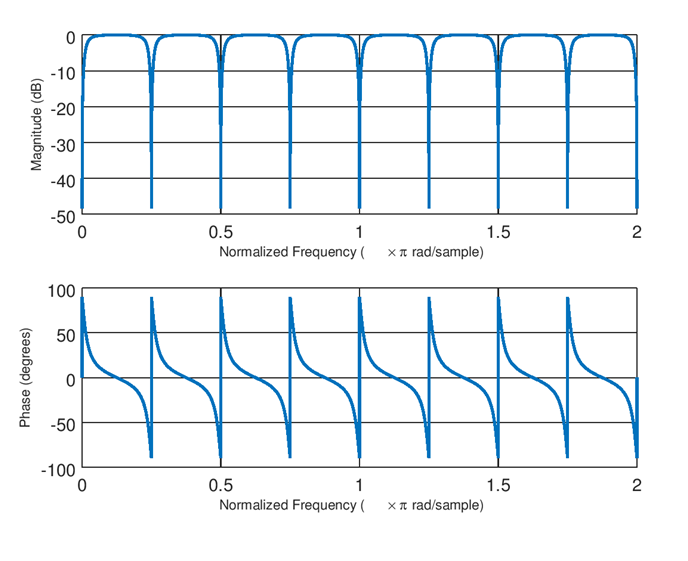 The possible challenges with this approach is the significant passband phase distortion as N increases, and the amount of precision required in implementation.

If the phase distortion was an issue and the notches need not be as tight as the previous IIR implementation can provide, then a third option is to combine the linear phase notch response given by $H(z) = 1-z^{-N}$ cascaded with a simple 3-tap linear phase compensator similar to what I detailed in this link (the compensator shown is actually a raised minus cosine response; a raised positive cosine response would be the approach for this case, following the same process outlined at that post.)

In particular see the plot in that post for the interpolated CIC compensator which is implmented by simple zero insert (meaning to interpolate by 8, simply insert 7 zeros between each filter coefficient in the 3 tap compensator). This won't achieve the flatness and sharp nulls as done with the IIR approach above but will have significantly improved flatness over a wider passband range than the simple notch filter approach AND with linear phase. The cascade of the simple delay and subtract comb filter with the interpolated 3 tap FIR compensator (given by the two responses shown below) results in a significantly flatter passband response with minimal added complexity. 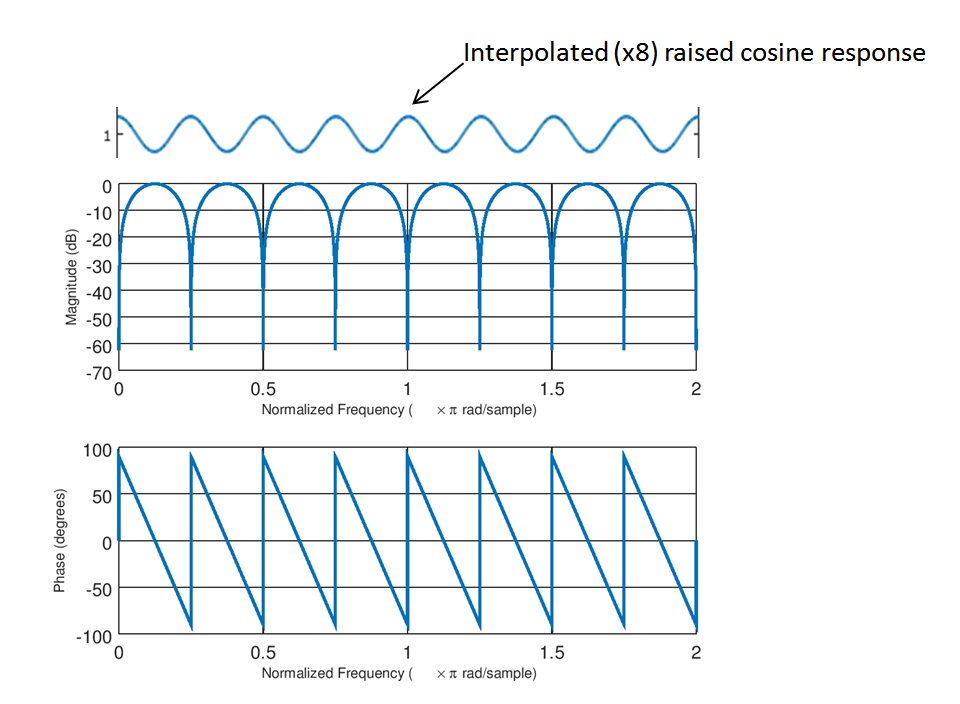 Not the answer you're looking for? Browse other questions tagged filters audio spectrogram pitch fundamental-frequency or ask your own question.

7
Understanding values saved in WAVE file
1
Understanding Digital Audio - "From Audio Device" in Matlab
7
How can I automatically identify and remove a fundamental frequency and all of its harmonics?
3
Which filter for an audio equalizer
12
How to deal with low fundamental when using AMDF for pitch extraction?
1
Synchronization of two audio tracks via Mel-frequency cepstral coefficients (MFCCs)
0
Guitar fundamental frequency vs pitch
2
Distinguish harmonic sounds from non-harmonic
4
How to do Frequency Scaling on an Audio File