For some message input signal $m(t)$ that is infinite in time (i.e. is not identically $0$ for any interval $t_1<t<\infty$), and that is hence necessarily band-limited (by the properties of the fourier transform), the sampling theorem states that if $f_{sampling-frequency}>2f_{maximum-fourier-component}$, then the original signal $m(t)$ is fully determined by the samples.

However, for any real signal that is transient and aperiodic, we will always take a set of samples in some range $t_1<t<t_2$, and hence the message is time-limited, excluding the possibility of it being band-limited.

For example, here it states:

The Shannon’s sampling theorem was derived using the assumption that the signals must exist over infinite time interval. But all of our applications are based on finite time intervals. The objective of this research is to correct this inconsistency. In this paper we show where and how this infinite time assumption was used in the derivation of the original sampling theorem and then we extend the results to finite time case. Our research shows that higher sample rate is necessary to recover finite duration signals. This paper validates, with detailed theory, the common industrial practice of higher sample rate. We use the infinite dimensionality property of function space as the basis of our theories. A graphical example illustrates the problem and the solution.

However, I don't understand why this should be the case. If we have some $m(t)$ defined in the range $t_1<t<t_2$ then we can postulate an oscillatory function that extends to infinity that is made up of direct repetitions of the waveform with period $t_2-t_1$. Now, the fourier transform of the function defined over infinity is a set of discrete values that range over some bound (band-limited). For this infinite function, the sampling theorem should hold in its current form, and the Discrete Fourier transform (DFT) translates between the set of discrete time-domain samples ${m_n}$ and the discrete set of complex frequency domain samples $M_b$. As long as we specify the time range over which our original signal was taken, since the DFT does not specify whether the original samples was actually periodic or not), it would seem that Nyquist's theorem holds in its current form.

To summarise, any signal we take is not a time-limited function if we hypothetically extend it in a periodic manner. However, I know there is something wrong with my understanding - it would imply that for any real signal or use of the theorem, we only need consider the DFT, and if so why is it routinely derived for infinite functions at all? What am I missing i.e. how is what I think incorrect, or how is it in fact consistent with the quote above?

I do not see specifically what the OP thinks is incorrect. I follow the thinking in the post and do not see a flaw but let's review the key characteristics below in case that fills in a hole in the thought process:

For periodic systems we can consider a time span that extends over one period (0 to T) or from $-\infty$ to $+\infty$. Both are equivalent as long as we agree that the $\infty$ case must be periodic.

Similarly for sampled systems we can consider a frequency span that extends over one frequency range, 0 to $F_s$, where $F_s$ represents the sampling frequency, or from $-\infty$ to $+\infty$. Both are equivalent as long as we agree that the $\infty$ case must be similarly periodic in frequency. (Note the base frequency that repeats can also be given as $-F_s/2$ to $+F_s/2$ but the range 0 to $F_s$ is most common when referring to the DFT.)

For any other systems; aperiodic or not sampled, we cannot use the DFT and call that equivalent, we can only approximate those systems with the DFT.

Below is a summary of the various Fourier Transforms that we can use in those other cases:

CASE 1: Continuous and Aperiodic in time: The Fourier Transform 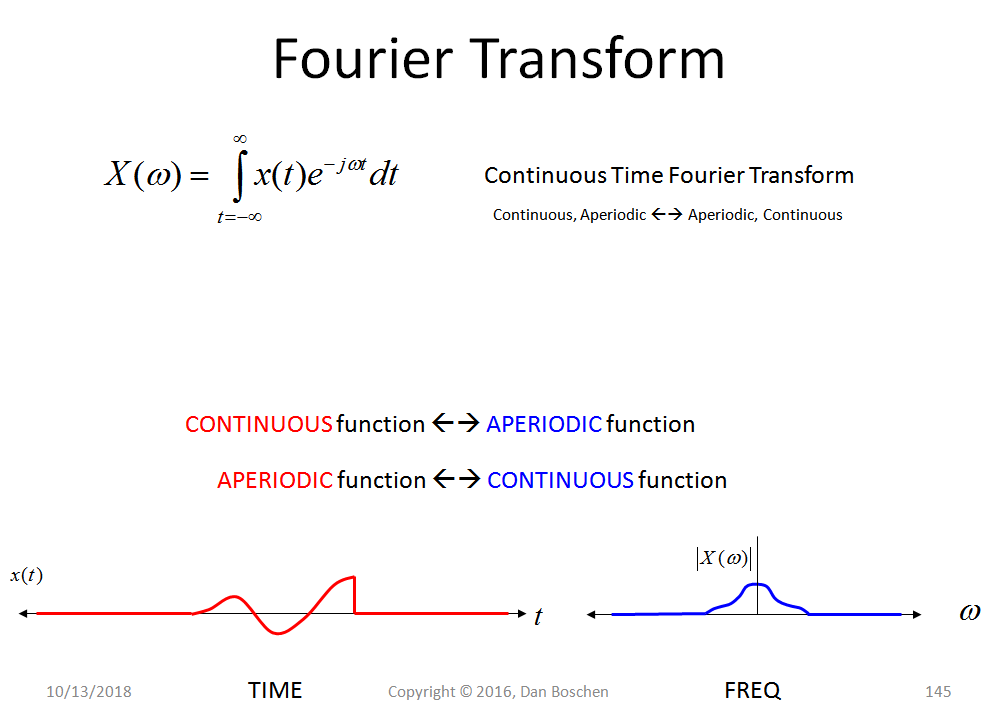 CASE 2: Continuous and periodic in time: The Fourier Series Expansion

Note that x(t) can still be periodic in the case above; there is nothing that excludes taking the Fourier Transform as written in the graphic above on a periodic function. This will result in the continuous Fourier Transform result as being 0 except for the frequencies at multiples of 1/T, including zero, which may have non-zero values at only these locations. Knowing this, we can solve for just those frequencies in this case, resulting in the Fourier Series Expansion: 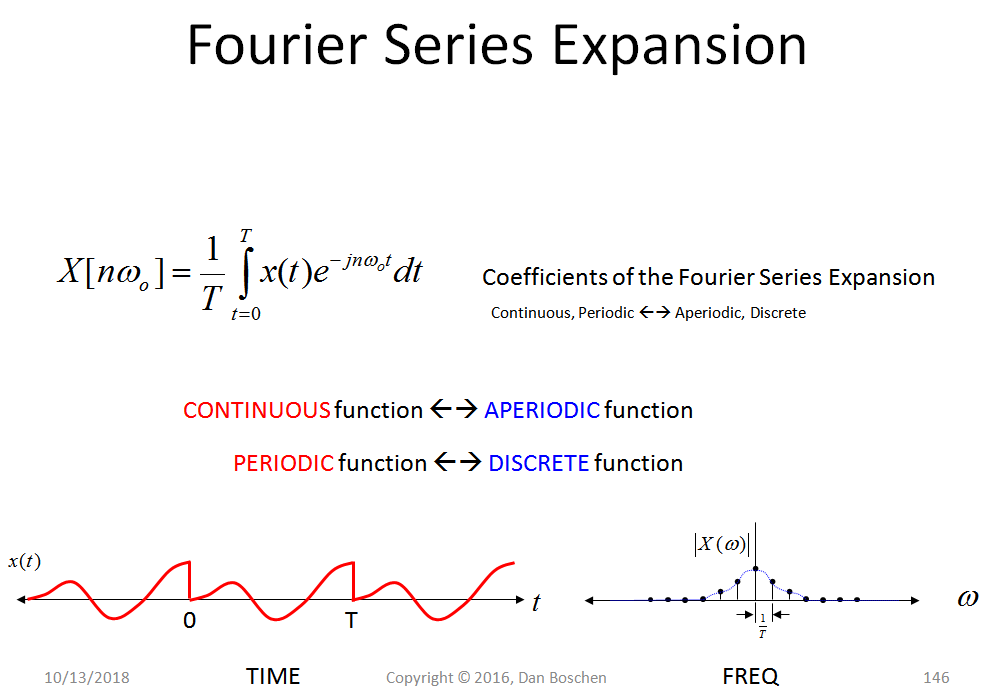 The third case is to now consider the sampled version of our first case, where we have an aperiodic time domain function again, but this time it is sampled in time. This is the Discrete Time Fourier Transform. We have a similar result to the first case, the Fourier Transform, with the only change that it is now repeating in frequency. As previously described the repetition boundaries occur at multiples of $F_s = 1/T$, so if our frequency spectrum in our first case extended beyond $F_s$, we would get frequency folding (aliasing) as a result and therefore would not be able to represent our time domain waveform exactly (the sampling rate was not high enough!).

(Side note: Zero padding prior to taking the DFT approximates the DTFT, the more zeros you add in, the more the frequency result approximates a continuous function, and that function is samples of the DTFT!). 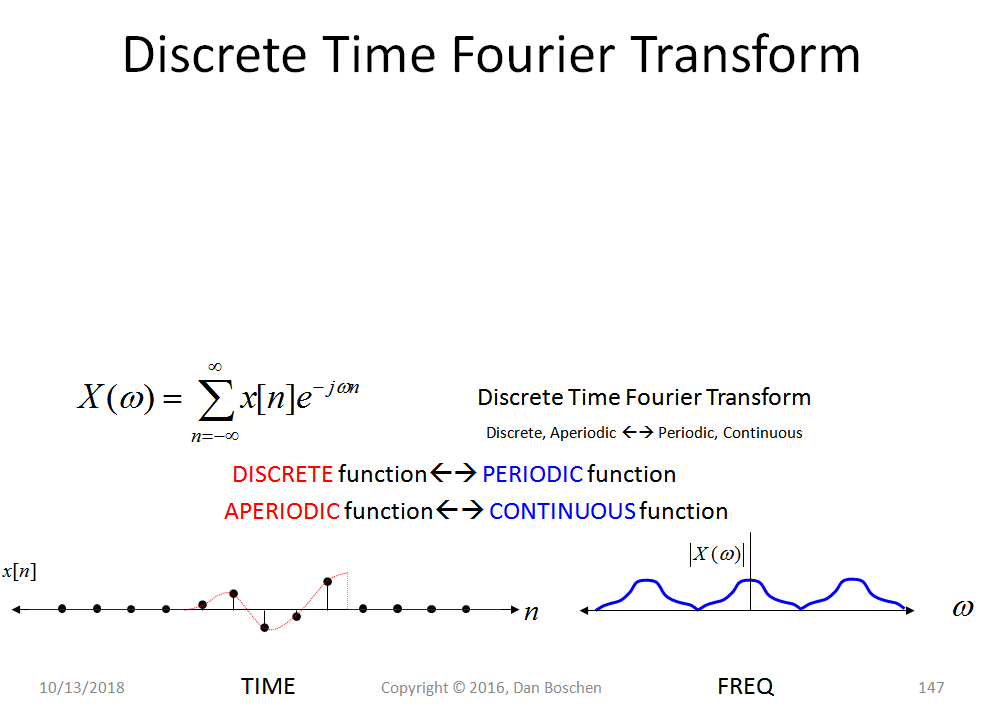 CASE 4: Discrete and periodic in time: The Discrete Fourier Transform

Finally, we come to the DFT (the FFT is an algorithm to compute the DFT exactly). In this case, when considering the same time axis as above that extends from $-\infty$ to $+\infty$, the time domain waveform must be repeating (periodic). The periodicity in time results in discrete frequencies that can only exist at integer multiples of 1/T Hz where T represents one period in time in seconds. Note that like the Fourier Series Expansion, the periodicity is implied; the actual transform considers N samples in time and provides N samples in frequency, but the periodicity described is evident when both axis are extended to infinity. 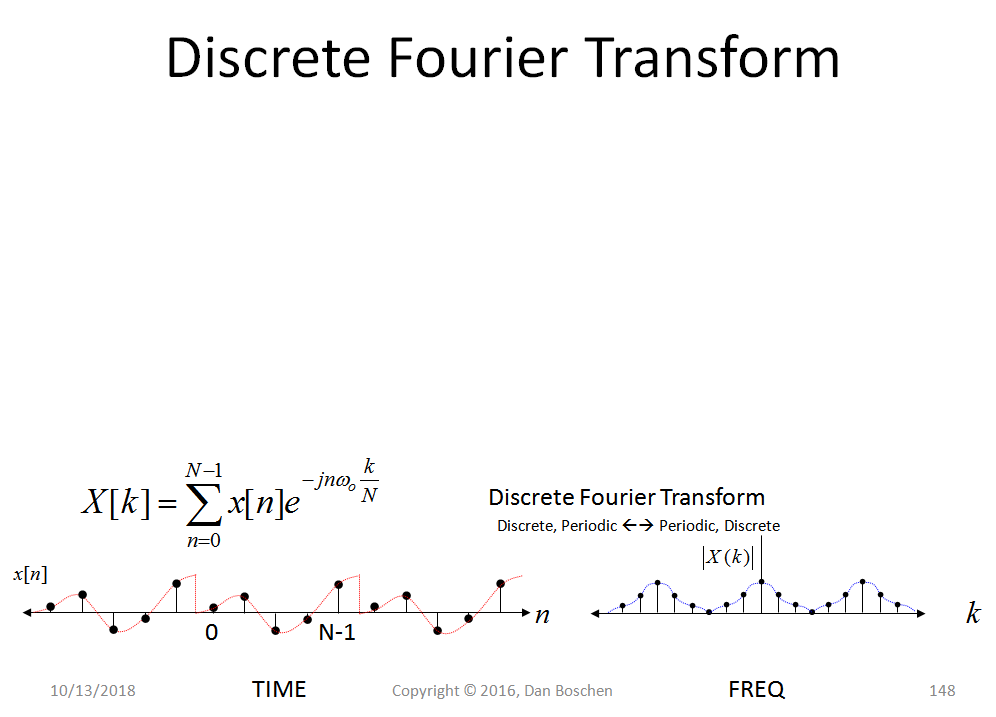 1
Sampling Theorem: How to know the value between two samples of a Signal
9
Signal values we will 'miss' between sampling instances during sampling of band limited signals
0
Band-limited signal recovery with finite bit depth
0
Aliasing and DTFT of a real signal
2
Cross Domain Equivalent to Nyquist Sampling Theorem?
1
How do we equate the signal energy before and after sampling?
2
Is there an efficient algorithm to precisely find the spectrum of a finite discrete signal consisting of incommensurable frequencies?
2
Misunderstanding of Nyquist sampling theorem and minimum sampling rate
1
Effect of sampling a cont. stochastic process on the variance