Excluding points too close to a set of coordinates

I was wondering if anyone can help me. My ultimate aim is to take an image like the one shown and draw line between the white and black blobs that show a direction and output the coordinates in the image. However, blobs should only be connected if they are on the adjacent vertex and blobs on the same vertex should not be connected i.e. a white blob should only connect to a black blob on its nearest neighbour. 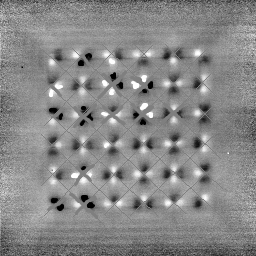 Currently, I have been able to draw lines between blobs and give them a colour depending on their direction. I have also been able to exclude diagonal lines.

My current problem is my code is still drawing vertical and horizontal lines across the same vertex. I cannot use a distance limit as some of the nearest neighbour blobs are the same distance away as the ones on the same vertex.

I have managed to map the coordinates of the vertices using mouse clicks and store those in a list and I also have a list for the centre point between two blobs so I was hoping I'd be able to say - if the centre point of the line is too close to the vertex coordinate then don't draw a line.

Thanks in advance for any help!

Here is an example of a before and after that is hand done.

Currently what I'm getting for the first image is this. Some of the blobs arent being recognised but I can sort that. The issue is, for example, on the left vertical edge there are two blue lines going over two of the vertices which I don't want. 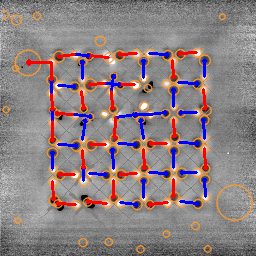 Browse other questions tagged image-processing array-signal-processing or ask your own question.

25
What are the practically relevant differences between various image resampling methods?
2
Path Center Correction
3
An alternative algorithm for blob detection
3
Easy way to get rid of noise in a hand drawing
1
How to recognise different symbols from their slope ? like (<,>,^) etc
2
How to Draw Line at non-integer pixel cooridantes on Image
0
removing vertical lines in grayscale images by thickness
0
How to draw a vector between light and dark spots on an image
0
How can I trace a path around an image consisting of only black and white lines?
1
Lossless rectangular-polar transformation