I am looking at data from a mechanical system under an unsteady load. I'm trying to find the simplest way to identify the portion of the signal once the system reaches its new equilibrium. Here's a simple example. 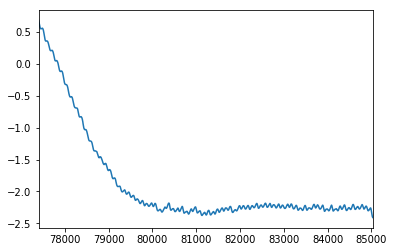 Any suggestions for a simple and robust approach would be most welcome!

It is difficult to think about robustness without knowing anything about the noise characteristics.

For example, it might be enough to obtain a number of these waveforms (20-50), obtain a box plot of the amplitude at each time instance and use that information to derive a very simple threshold below which the signal enters a region that can be safely characterised as equilibrium.

If there is enough noise to cause the signal to "jump" above the threshold, then you might want to try introducing some form of hysteresis in the Thresholding process. In other words, you might consider "equilibrium" the point when the waveform has dropped below a certain threshold and has stayed there for at least a $u$ amount of time.

If the noise characteristics are such that it is impossible to "tune" such a threshold then a simple 3-5 tap one-dimensional median filter or a very simple low pass filter might be enough, to smooth out the waveform sufficiently and enable you to apply a threshold more reliably.

If the process is such that the waveform is "floating" and a fixed threshold is impossible, then you would be looking at the point when the rate of decay is sufficiently flat. Since you already know that you have an exponentially decaying waveform, you should use this to your advantage. In this case, you can still apply some sort of smoothing pre-processing (e.g. filtering, if required) and then fit the data to an exponentially decaying model. You can then obtain the first order finite difference and set a threshold on that variable for when it drops sufficiently close to zero denoting that the curve is flattening out.

But in your case, you seem to have some sort of undershoot as well (some sort of inertia effect (?)). In extreme cases, the exponential decay model might not be a good assumption in terms of fitting the exact waveform. In that case, it might be better to do a DFT on the settling segment and try to quantify the settling time by known results from automatic control system theory.

Not the answer you're looking for? Browse other questions tagged continuous-signals window or ask your own question.

5
When convolving two functions that are constants in a region and 0 everywhere else, where does the integration start?
1
How is the ends of a bandpass filtered signal reliable after applying the cosine taper?
1
Sampling signal after root raised cosine
0
What happens if you apply window after filtering a discrete signal to get it back to its original length?
2
How to identify the beginning and the end of a signal using MATLAB
1
What is the effect on Hilbert transform of signal after multiplication by sinusoid?
0
How to automatically identify a surge in a periodic signal