First, I am by no mean a sound engineer (as you will guess later).

I was just wondering something while looking at the waveform of a .wav

for a given shape of waveform on a duration of 2 sec for example, how can we make sure that the frequencies fft gives are the only correct one? what if very little parts of a sinusoid could be considered instead of a full continuous sinusoidal movement that just varies in amplitude? or, what if a sinusoid had a lot of very fast varying amplitudes ?

that would lead to an infinity of solutions I guess..

The Discrete Fourier Transform, or DFT (the FFT is an algorithm that computes the DFT) of a length of finite duration (which any practical transform would need to be) is identical to the result of the transform of an infinitely long sequence formed by repeating the original sequence in time.

Knowing this provides the following insights related to your question:

First, anything that repeats (exact repetition) in time can only exist at discrete frequencies in the frequency domain. We see this with the Fourier Series Expansion specifically as shown in the graphic below.

The concept behind the Fourier Series Expansion is that any single valued continuous function can be represented as a sum of sinusoidal components and notably each component MUST have a frequency that is an integer of 1/T where T is the duration of the signal in time. Therefore IF those sinusoidal components were allowed to play out for all time (rather than being bound to the time interval [0,T]), the next cycle immediately after T would have to commence and proceed exactly as the waveform did at the start of the sequence (as each sinusoidal component would do the same). Thus it is often described that the Fourier Series Expansion decomposes any periodic function into a sum of sines and cosines (or equivalently and I believe mathematically simpler, complex exponentials). 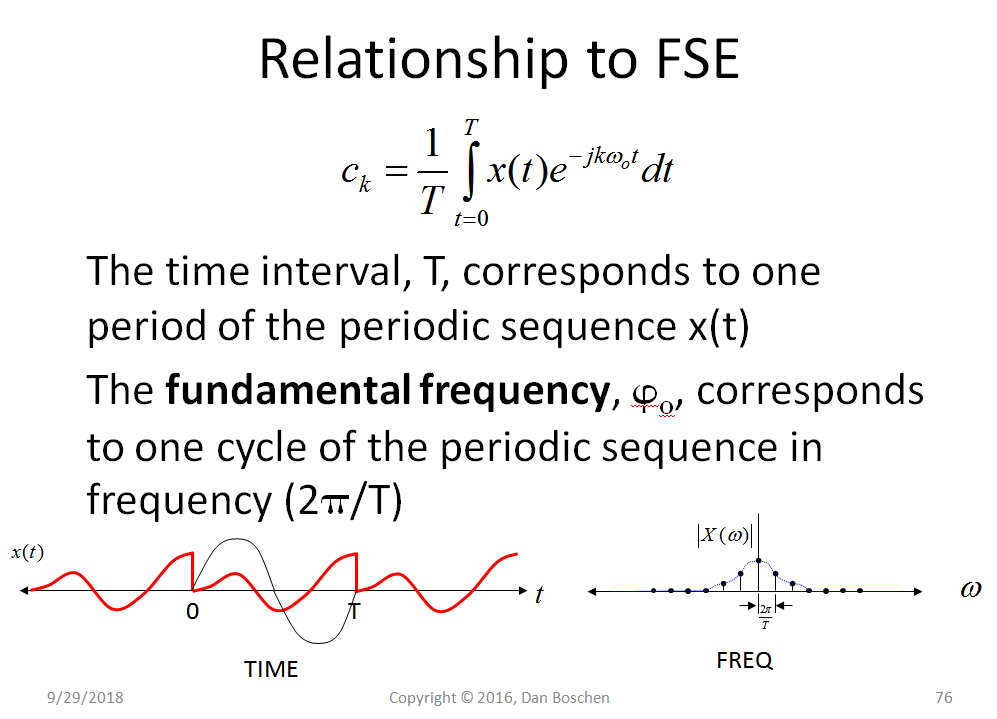 The mathematical model of the time limited signal from [0,N-1] (for N samples of the DFT, which is equivalent to the analog bound of [0,T] in time), to also be a signal extending to infinity repeating with time provides for further intuition into the behavior and result of the DFT. Specifically we see that repeating a signal in time results in discrete uniform spaced impulses in the frequency domain, that can only exist at integer multiples of 1/T (including 0) where T is the length of the base waveform in time.

The repetition is an implied construct that actually helps significantly to provide an intuitive understanding of many signal processing constructs- especially when considering both analog and digital domains. To be clear, the DFT involves only a fixed duration sequence both in the time and frequency domains, but mathematically these sequences can be repeated for infinite duration with the same result. 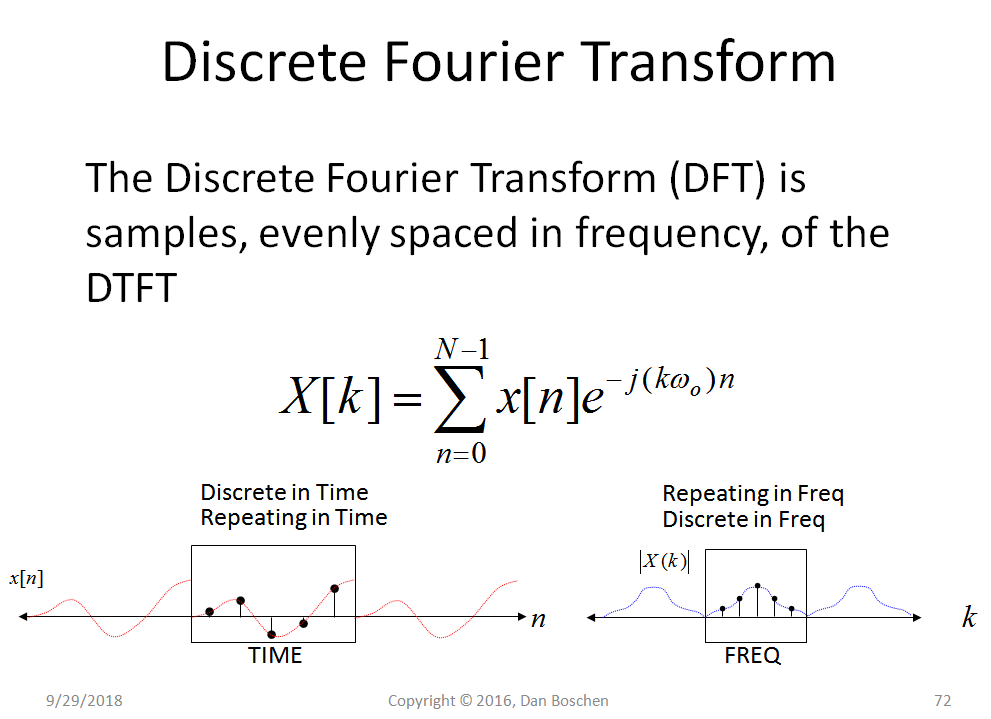 For example, to your question of what happens where there is a partial cycle? If we realize this equally represents a waveform repeating for all time, we see that in this case there would be an abrupt transition in the waveform. 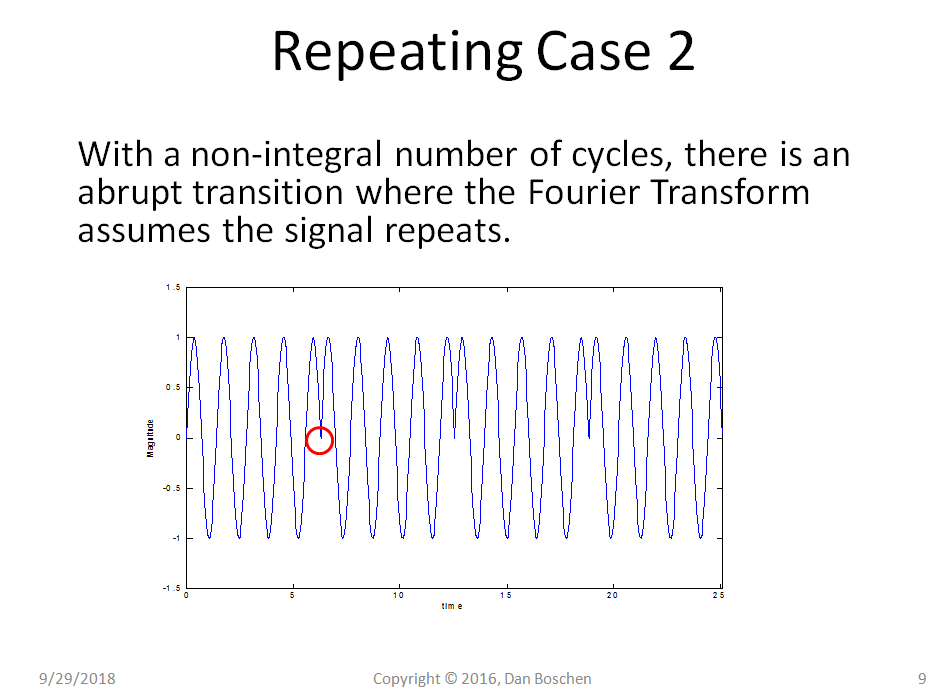 Such a waveform cannot be created or represented with a single sinusoidal tone. Going back to the Fourier Series Expansion, we know that it can be represented by multiple tones as long as they are spaced at integer multiples of the repetition rate. So where we thought one tone exists, similarly in the DFT there will be multiple tones as required to create such an abrupt transition. According to the DFT these frequencies really exist as what we are solving for in that process is the frequency components that are needed to create the time limited time domain waveform.

Below shows the case above (lower plot) compared to what we would get if there was a complete integer number of cycles over the time duration used (upper plot). This is one explanation of "Spectral Leakage" with the DFT but given as example insight into the relationship between the time duration of the DFT chosen and the frequencies that would result. 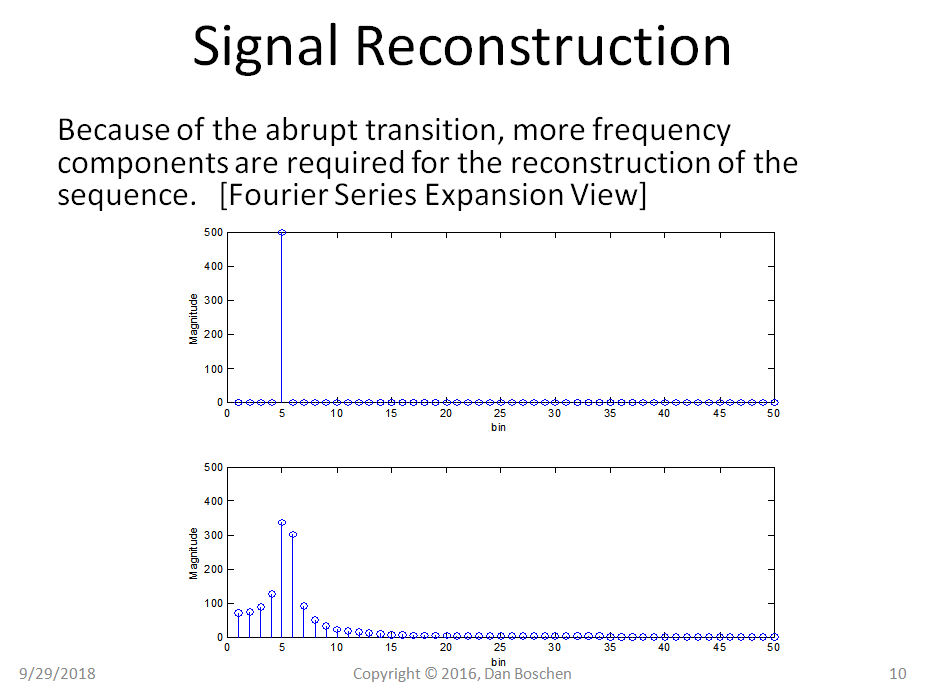 If the waveform was changing with time (either in frequency, or amplitude beyond the sinusoidal component itself, such as an envelope) this would require many frequency components to represent it. This is no different than a modulation view of the time domain waveform: to transmit signals over the air we modulate the amplitude or frequency of a carrier frequency (that is better suited to go over the air) which results in several frequencies being present around that carrier. If the waveform is not actually repeating with time (which is likely the case), then instead of discrete tones we will get a continuous band of frequencies around the carrier.

Not the answer you're looking for? Browse other questions tagged fft amplitude wave or ask your own question.

0
Is this statement contradicting with the band-limiting theorem?

4
Peak to peak amplitude of sum of sinusoidals (harmonic frequencies)
0
Modelling propagation of sound wave by particle simulation
2
How to obtain the Sound Pressure Level from .wav file based on these given parameters?
0
Get position of different frequencies in sound signal
1
Concatenating multiple FFTs
1
Mathematical equation for the sound wave that a piano makes
1
Adding phase to a signal that has multiple frequencies
0
Measuring Amplitude of sound wave FFT
0
harmonic waves as integer multiple in spectrum