can all be useful to smoothen a signal, such as an envelope signal:

For which application would a Savitzky-Golay filter be more interesting than a classical lowpass?

Does it adapt itself to the input data?

Is it better for transient preserving?

Have you ever been in an engineering situation one day when you decided "Let's use a SG filter instead of moving average or another FIR lowpass! It's better because this and this and this..."? Then this question is for you!

First of all, I'd like to repeat what has become clear in the discussion spawning from the other answers: the categorization of smoothing filters in the question into linear and time-invariant (LTI) FIR/IIR filters on the one hand, and Savitzky-Golay filters on the other hand is misleading. A Savitkzy-Golay filter is just a standard FIR filter designed according to a specific criterion (local polynomial approximation). So all filters mentioned in the question are LTI filters.

The remaining question is how to choose a smoothing filter. If computational complexity and/or memory are an issue, IIR filters may be preferable over FIR filters, because they typically will achieve comparable noise suppression (i.e., stopband attenuation) with a much lower filter order than FIR filters. But note that if real-time processing is necessary, one possible disadvantage of IIR filters is that they cannot have an exactly linear phase response. So the desired signal will suffer some phase distortions. For offline-processing, the phase distortions can be avoided, even with IIR filters, by applying zero-phase filtering.

Apart from the considerations discussed in the previous paragraph, it is mainly the design criterion that matters, not so much if the filter is FIR or IIR, because any (stable) IIR filter can be approximated with arbitrary accuracy by an FIR filter, and any FIR filter can be approximated by an IIR filter, even though the latter can be much more difficult. The appropriate design criterion obviously depends on the properties of the data and the noise. When it comes to smoothing we usually assume sufficiently oversampled (i.e., smooth) data. If the noise has mainly high frequency components, i.e., if there is little spectral overlap between the data and the noise, we want to maximize stop band attenuation, or minimize stop band energy, while preserving the desired signal as well as possible. In this case we could choose a linear-phase FIR filter designed according to a minimax criterion using the Parks-McClellan algorithm. We could also minimize the stop band energy (i.e., minimize noise power in the stop band) by choosing a least squares method. A mix between the two criteria (minimax and least squares) is possible by choosing a constrained least squares design, which minimizes stop band energy while constraining the maximum approximation error in the pass band.

If the noise spectrum significantly overlaps with the signal spectrum, a more careful approach is required, and brute-force attenuation will not work well because either you leave too much noise (by choosing the cut-off frequency too high) or you distort the desired signal too much. In this case Savitzky-Golay (S-G) filters may be a good choice. The price to be paid is mediocre stopband attenuation, but one advantage is that some signal properties are preserved very well. This has to do with the fact that S-G filters have a flat pass band response, i.e.,

where $r$ is the order of the approximating polynomial and $H(e^{j\omega})$ is the filter's frequency response. Property $(1)$ guarantees that the first $r$ moments of the input signal are preserved in the output, which means that the width and height of peaks in the desired signal are well preserved.

Of course there's also a compromise between the two types of smoothing filters discussed above (high stopband attenuation and S-G). We could design an FIR filter with a certain degree of flatness at $\omega=0$ and use the remaining degrees of freedom to maximize stop band attenuation, or minimize stopband energy. In the case of FIR filters, the resulting design problem is sufficiently simple (and convex), and general optimization routines available in several software packages can be used to obtain the optimal filter for the given application.

For the ones interested in the theory of S-G filters, the most relevant references I can recommend are the following:

As with anything, sometimes certain tools are better than others.

Moving average (MA) filters can be used to smooth data, and are FIR. They're pretty much the simplest filter you can come up with, and they work well for a lot of tasks as long as you aren't trying to model any sudden jumps or polynomial trends. Keep in mind though that these are essentially just low-pass filter, so they work best when the data you care about in the signal is low frequency and fairly narrow-band.

Savitzky-Golay (SG) filters are a special group of FIR filters which essentially fit a polynomial to your time series as the convolution slides along the signal. SG filters are useful for signals where the things you care about aren't necessarily low frequency and fairly narrow band.

I think you'll find that if you read the Wikipedia page you've linked pretty thoroughly, it explains the difference between SG and MA filters in quite rigorous detail. Keep in mind though: in the end, they're both just tools to do similar things, it's up to you to find out when to use the right tool

Since there seems to be some confusion that SG filters are "adaptive" in some way at a basic level, I've included a simple MATLAB example. As Dan as pointed out, these can be made adaptive, but their basic implementation often is not. By inspecting the code, you'll see that this is simply just a matrix look up with some special handling. Nothing about this filter is "adaptive" in the traditional sense, you simply are picking a polynomial fit and the length over which that polynomial will be fit onto the signal via convolution; SG is essential FIR. The script I have below produces this plot: 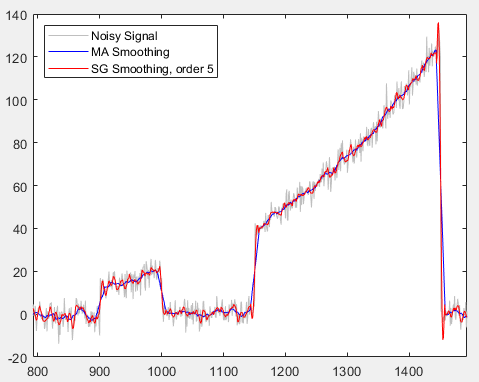 Looking at this figure, you can see that the MA and the SG essentially accomplish the same thing, but with some important distinctions:

For you to get a better understanding of how these filters work, I'd encourage you to take the code here and manipulate it, and see how all the individual parts of the SG filter work.

Code for the MATLAB example:

my previous answer (before this edit) denoting the Savitzky-Golay (S-G) filter as a nonlinear, time-varying input data dependent was wrong, due to a premature mis-interpretation of how a Savitzky-Golay (S-G) filter computes its output according to the wiki link provided. So now I'm correcting it for the benefit of those who would also see how S-G filters are implementable by FIR-LTI filtering. Thanks to @MattL. for his correction, the great link he has provided and the patience he had (that I could have never shown) during my investigation of the issue. Though I'ld honestly prefer a more verbose objection which is clearly not necessary nevertheless. Also please note that the correct answer is the other one, this one is just for additional clarification of LTI property of S-G filters.

Now it's not surprising that when someone (who has never used those filters before) faces the definition of the S-G filter as a low order LSE polynomial fit to given data he/she would immediately jump into the conclusion that those are data dependent, nonlinear and time (shift) varying, adaptive filters.

Yet, the polynomial fitting procedure is cleverly interpreted by S-G themselves, such that it enables a completely data independent, time-invariant, linear filtering possible, hence making S-G as a fixed LTI-FIR filter.

The below is a shortest summary from the link provided by MattL. For any details that seems to be missing, please consult the original document, or ask to clarify. But I would not like to re-produce the whole document here.

Those optimal polynomial coefficients $a_k$ are obtained by setting the derivative of $\mathcal{E}$ to zero:

Now for those who are familiar with LSE polyfit procedure, I'll simply write the resulting matrix equation (from the link) that defines the optimal coefficient set:

Now lets lean back for a moment and discuss a point here.

As eq.(2) clearly indicates, eventhough $A$ and $H$ are independent of input data and depend only on the time indices $n$, the optimal LSE polynomial coefficients $a_k$ are input data dependent. Furthermore, they also depend on the size of the window $M$ and order of the polynomial $N$. Moreover, as the window slides along the input data $x[n]$, the coefficient $a_k$ should be re computed (updated) and hence will be time dependent as well. That's exactly how the S-G filter is defined in the link at the $2^{nd}$ page excerpted below:

...This (the LSE polyfit) can be repeated at each sample of the input, each time producing a new polynomial and a new value of the output sequence y[n]...

So how do we overcome this puzzling surprise? By interpreting and defining the S-G filter output to be the following:

Again consider the computation of $a_k$ :

from which we can see that the single coefficent $a_0$ is given by the dot product of the first row of $H$ with the input data vector $x$; i.e.,

where in the last equality, we have interpreted the dot product sum as the convolution sum by considering the impulse response of the S-G filter to be $$\boxed{ h[n] = H(0,-n) }$$,

more specifically it's the impulse response of S-G filter of order $N$ with a window length of $2M+1$.

And the complete output $y[n]$ of the N-th order S-G filter witha window size of $2M+1$, for an input $x[n]$ of length $L$ is obtained by a single LTI convolution with the impulse response $h_N[n]$

The fact that polynomial coefficients $a_k$ depend on the input data, does not prevent the filter from being an LTI FIR. Because an impulse response $h[n]$ can be defined to represent the output $y[n]$ to be computed from a linear combinations of input samples. The linear combinations of input samples $x$ are inherently implied by the matrix product $a = H x$ that defines the optimal coefficients $a_k$ of $p[n]$, hence any linear combination of $a_k$ would also result in an FIR LTI filter $h[n]$ to represent the LSE polynomial fit procedure. 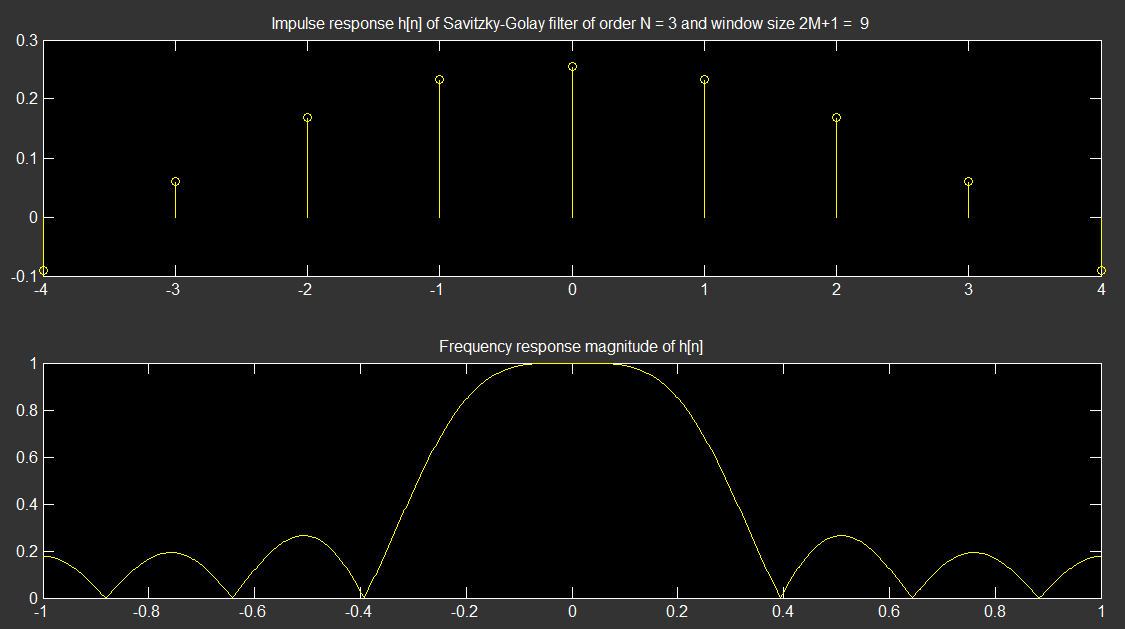 Hope this clarifies the issue.

Not the answer you're looking for? Browse other questions tagged filters filter-design lowpass-filter smoothing or ask your own question.

36
What is the advantage of MATLAB's filtfilt

21
Savitzky-Golay smoothing filter for not equally spaced data
7
How to smooth a signal?
8
Savitzky-Golay filter parameters
1
How to filter uniform noise in a microcontroller?
13
When Is a Kalman Filter Different from a Moving Average?
0
Which anti aliasing filter algorithm for efficient audio resampling?
1
Windowing before viewing a filter frequency response?
2
How to filter a signal using a bandpass filter consisted of two moving average filters?