When to use Rician fading vs Gain for Directional Antenna

This is a pretty simple question. [The answer might not be simple :( ]

If I am using a directional antenna, can I used Antenna gain $G_T=1$ as I am considering Rician Fading between transmitter and receiver?

On the contrary, if I am using $G_T>1$, then do I use Rayleigh fading instead of Rician?

The antenna is mounted under the roof-top in an indoor environment. (e.g. indoor stadiums, warehouses, office building/rooms etc.). The Antenna is directed towards the ground, so that the signal-loss in unwanted direction is minimized, (unlike isotropic antenna where energy is radiated in $360^o$).

For example, the azimuth pattern below is for a Yagi antenna with a gain of 15 dBi, which shows the highest gain is achieved when the antenna is pointed in the 90° direction, along with other sidelobes that are also sensitive but significantly less gain (for example approximately -4 dBi at 45° and 135°). Not shown but the elevation pattern also has sidelobes that approach 0 dBi. 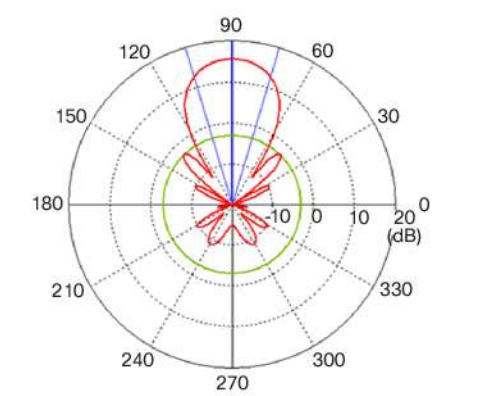 Rayleigh fading is a statistical model for the channel with multiple reflected propagation paths without any particular path being overly dominant, while Ricean results is the model for the channel that has multiple reflected propagation paths along with a dominant (usually direct) path. Rayleigh fading is typically a reasonable model for heavily urban areas while Rician is often used for SatCom. That said, a highly directional antenna can have the benefit of minimizing reflected paths from other spatial directions and therefore can make an otherwise Rayleigh channel appear to be more Rician, assuming that the antenna is pointed at a propagation path that is significantly strong enough, and the environment is not one that would still result in multiple paths of random delay within the main lobe of the antenna without a single dominant propagation path.

So a highly directional antenna can make a Rayleigh channel into a Rician channel, but that is not guaranteed to do so. It may seem strange at first to state that the antenna can change the channel, but this is really no different than all the buildings, mountains and other objects causing the reflections that also create the channel: the presence or absence of reflections is what creates the channel and the type of antenna is just one of the objects considered in determining the reflection environment.

Not the answer you're looking for? Browse other questions tagged fading-channel or ask your own question.