The fourier transform of the impulse functions is:

But the fourier transform of the impulse train is:

Since you asked for an intuitive answer, I can offer this:

This is because any frequencies that are not integer harmonics of the base repetition rate cannot exist; if they did the resulting function could not repeat in that repetition interval!

The unique characteristic of the integer harmonics is that these are the only frequency components that will start at the exact same position at the start of the next repetition interval of the fundamental frequency.

To further add to this: I always found the following properties in my slide below interesting and useful, especially since they work both ways: when I don't have an intuitive view in one domain, I can often swap time and frequency as I do have an intuitive view in the other. For example the first property: if it is periodic in one domain, it must be discrete in the other (and vice versa). Above we talked about a waveform repeating in time, being discrete in frequency. The opposite view is a waveform that is discrete in time; it repeats in frequency (such as the spectrum after A/D conversion).

As @MattL points out in the comments, there are cases where this won’t occur exactly as stated, such as shifting the discrete waveform in frequency (or in time) by an irrational amount (see example he have in the comments)—- in this case the waveform in the other domain appears to repeat, but it never actually does in a strict mathematical sense. 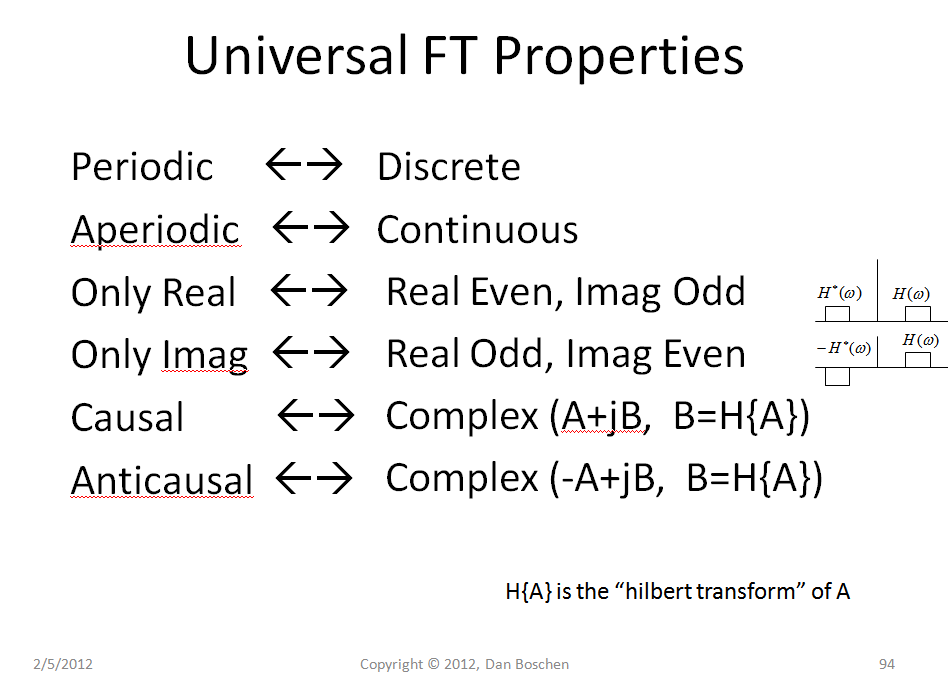 Not the answer you're looking for? Browse other questions tagged fourier-transform or ask your own question.

-1
Is discrete or continuous a matter of frequency?