I Read in one reference that, the Rayleigh distribution is commonly used to describe the statistical time varying nature of the received envelope of a flat fading signal, or the envelope of an individual multipath component. Can Rayleigh and Rician distributions be used with frequency selective fading channels? I need some explanation please

First it is useful to understand what a Rayleigh and Ricean distribution is, and then we can more easily see how that statistic can be used to describe certain fading channels.

A zero-mean complex signal that has an identical Gaussian distribution on both the in-phase and quadrature components will have a magnitude that is Rayleigh distributed. A useful explanation I came across that explained this well is an Agilent (HP) app-note on spectrum analyzer noise.

And I will paste the relevant figure below, thanks the HP/Agilent/Keysight. The first plot shows typical samples of a complex zero mean Gaussian signal. If we drew the histogram of the distribution on the real and imaginary axis, both would be the familiar bell curve of a Gaussian distribution. 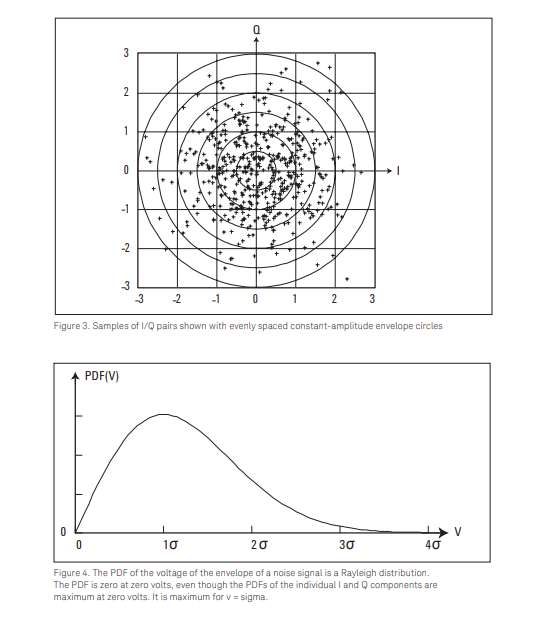 If the complex signal with an identical Gaussian distribution on both the in-phase and quadrature components was not of zero-mean, such as I depict in the figure below, then the amplitude distribution of this process would be Ricean. 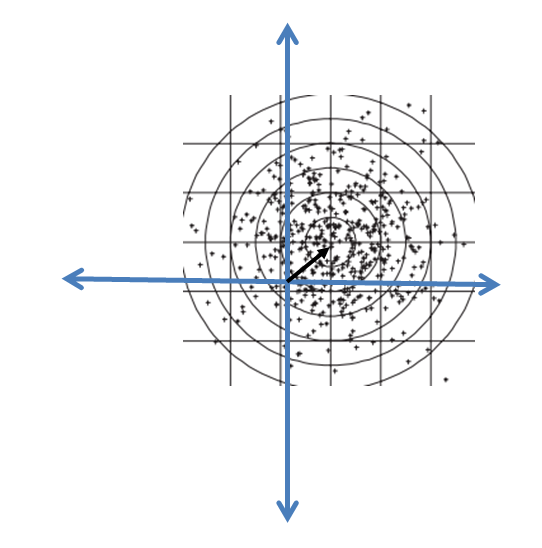 In the case of fading channels we are seeing the result of many independent signal paths from the transmitter reaching the receiver at different delays. The different arrival times results in each signal being an independent random process. Often in terrestrial land-mobile communications there is no particularly strong direct-path, but a distribution of many reflected paths resulting in a zero mean Gaussian complex signal at the receiver (once the carrier is removed). To the extent that the signal actually has this process (which means to the extent that there are many indirect paths and no particularly single dominant direct path), then the AMPLITUDE or related power level of this received will be well modeled by a Rayleigh distribution. 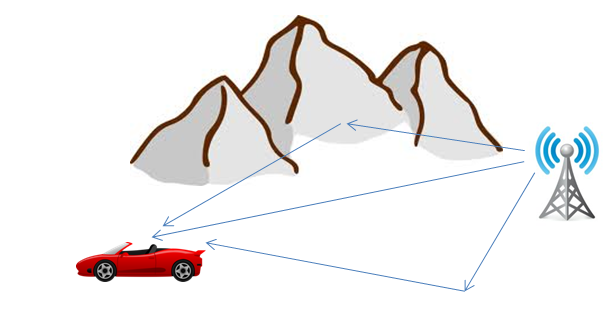 When there is a dominant signal path present, particularly stronger than the others, with the presence of multiple reflected paths, then the amplitude of the received signal will follow a Ricean distribution. This is more common in satellite communications for example.

To be frequency selective fading or flat fading is independent of the distribution of the signal strength being Rayleigh. That only has to do with delay spread. (See figure below). 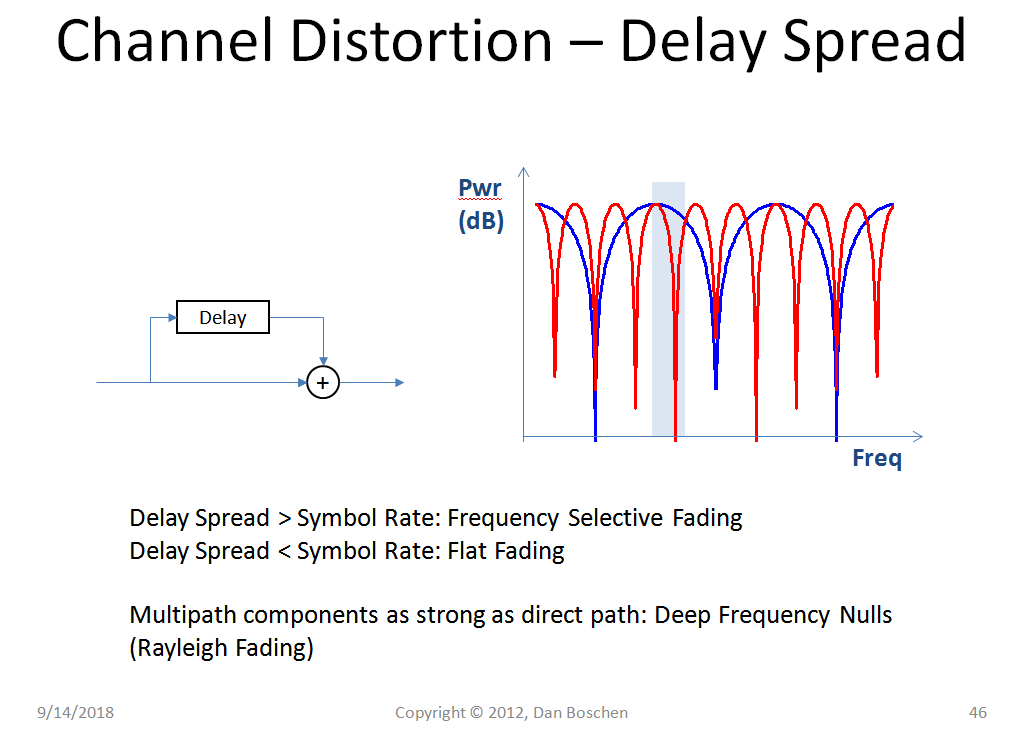 The Delay Spread of the channel is what determines the frequency selectivity of the fading (regardless if it is Rayleigh or not). Typical delay spreads for the macrocellular environment are shown in the figure below: 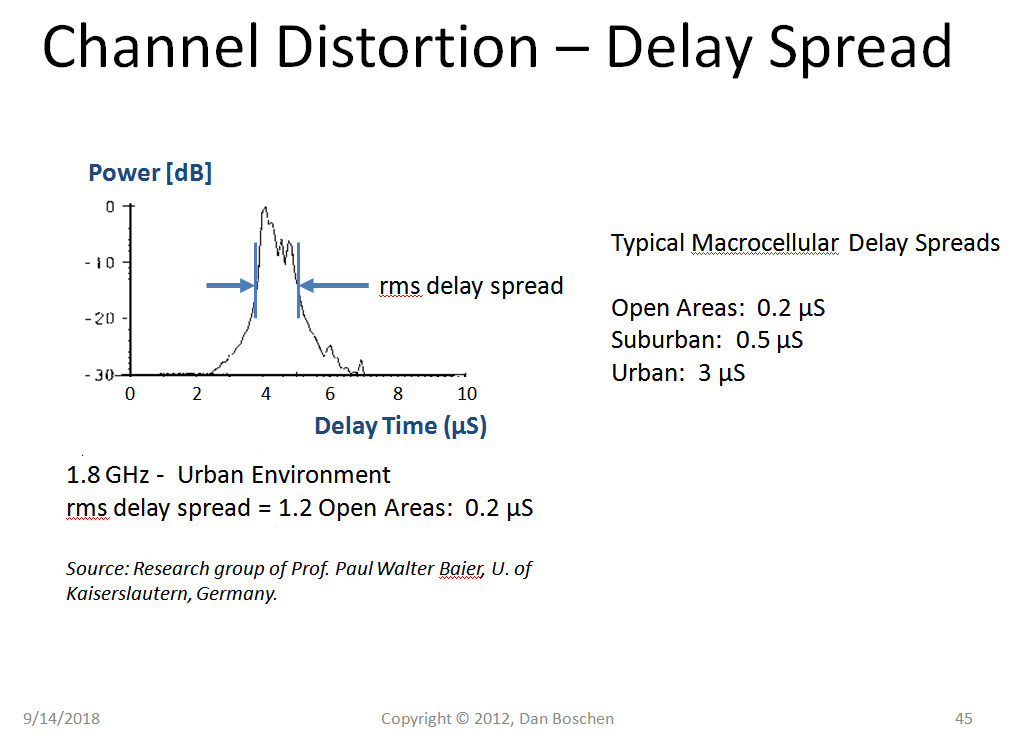 Not the answer you're looking for? Browse other questions tagged fading-channel or ask your own question.

0
How can I generate time-variant Rayleigh channel in MATLAB
0
When to use Rician fading vs Gain for Directional Antenna
0
Points from detectors: when to integrate, sum or average?
0
Analysis Received Signal at receiver side
0
Received signal's power under Raleigh fading