can someone please explain the steps of YIN pitch detection algorithm in a simple way "especially the last 3 steps".

here is the research paper of YIN algorithm http://audition.ens.fr/adc/pdf/2002_JASA_YIN.pdf Thanks in advance

Edit1(as i understand): I understand the autocorrelation to find out if the signal periodic or not "step1", then we will take the difference between the original signal with zero lag"delay" and subtract it with a delayed one "step2",now we have the negative peaks but to make the algorithm works and pick up the first delayed negative peak with the lowest delay we have to remove the first negative peak with 0 delay"step3", the fourth step is to set a threshold to get the most negative peak(i am not sure if i am right)"step4",step 5 & step 6 i dont understand them,can you please tell me if i am explaining right or wrong

There is an older question about YIN where I am expressing lack of impressing. The only thing that is novel in YIN is the Cumulative mean normalized difference function (Step 3): 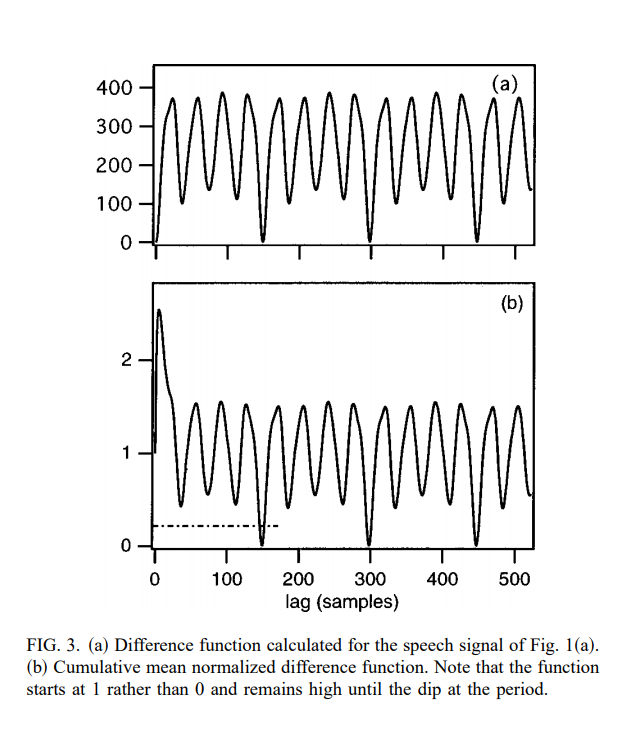 what is plotted above is the Average Squared Difference Function (ASDF) which is similar to the older AMDF. the purpose of this Cumulative mean normalized difference function is to normalize the result (for the purpose of a threshold), and to do something to avoid picking the null at a lag of 0 samples from being picked as the lag for the best match. they could have just said they won't start searching for the lag with the lowest null (or the null they want for the purpose of measuring the period) after the first lag that has a sign change for the slope. that would be the first peak, and then they can start searching for the lowest null without worrying about picking the null at zero.

i'm not impressed with YIN. i think i have a better idea for avoiding picking the wrong peak.

think of the Autocorrelation function as an upside-down ASDF. so then you're looking for peaks instead of valleys.

as per request, Step 5, parabolic interpolation of peaks (or valleys) is discussed in this answer and the Julius Smith reference therein. it is for getting sub-sample precision from the ACF evaluated at discrete lags.

step 6 is about avoiding picking the wrong peak and avoiding indecisively switching back-and-forth between candidate peaks. this is usually what we call "the Octave Problem". i discuss it in this answer. the YIN paper one identifies the problem and does not satisfactorally deal with it.

Not the answer you're looking for? Browse other questions tagged estimation pitch fundamental-frequency or ask your own question.

12
How to deal with low fundamental when using AMDF for pitch extraction?
8
How do window size, sample rate influence FFT pitch estimation?
11
What is an AMDF?
7
YIN Pitch detection Algortithm ( how do I improve my results )
3
How to prevent Octave Jumping in ACF of Speech Signal?

5
How to detect specific behavior in time series?
7
YIN Pitch detection Algortithm ( how do I improve my results )
1
Pitch Detection / Harmonic Product Spectrum - What's wrong?
12
How to deal with low fundamental when using AMDF for pitch extraction?
1
Pitch estimation using the autocorrelation method
2
Estimation of step amplitude using the CUSUM algorithm
3
Pitch detection, YIN, pYIN
3
What is a "pitch period"?