am I recording LTE uplink signals?

I have this app in my phone which tells me the LTE UL frequency and power: 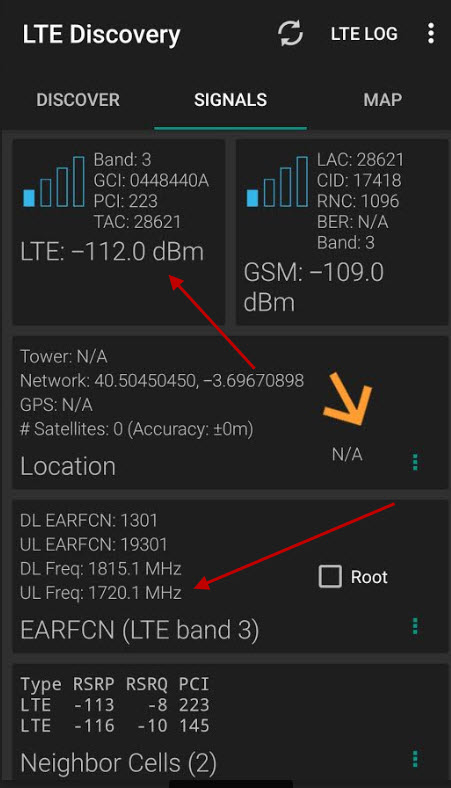 so I went with my SDR and measured the received signal at that frequency:

Now, how can I be sure this is the transmitted signal from my phone? As I made a call to and from this phone and nothing changed.

I did a second experiment when the phone switched to LTE band 20 and the spectrum looks quite different:

I have the feeling I'm not seeing the correct information in the LTE band 3 because my dongle (this one) is not actually receiving anything there, although it shows an spectrum? My goal here is to be able to detect my phone's transmitted signal and then, to make sure I can distinguish it before I invest in a more expensive SDR to be able to monitor higher bands.

There's a lot of different domains of knowledge coming together here, so I'll split my answer into multiple sections, each answering an implicit question that you raise in your explicit question. Hope that helps!

Can your RTL-Dongle actually receive at 1.72 GHz?

So, first the bitter pill: There's a lot of sellers out there that offer RTL dongles and claim that they've got an R820T tuner, but actually ship an Fitipower tuner that covers far less spectrum. I find that the most likely explanation here, especially considering the product description and the "tech specs" table disagree. Said table only claims:

So, possibly you've got an RTL-Dongle with a fitipower FC0012, not a R820T (which went out of production a while ago). RTL-SDR comes with the rtl_test utility, but possibly your software can show you the tuner installed in that device, too.

However, considering your display shows the right frequencies, let's assume it actually tuned to ~1.720 GHz when you instructed the device to tune there.

Are you using an antenna that's suitable for these frequencies?

Just mentioning that, because I've supported far too many people that told me after a couple of hours that they were trying to receive FM broadcast radio at 100 MHz using a Wifi antenna, and vice versa.

Are the powers in these different applications related?

Then, first thing to notice: The powers displayed in your SDR software are not related to the power your App shows for reasons:

Can I analyze LTE signals using an RTL Dongle, at all?

LTE uses a total bandwidth much larger than 3 MHz, so, if at all, you're looking at a small excerpt of your uplink; possibly even one where your handset doesn't even get an allocation of resources.
LTE is very flexible about assigning resources to different user equipment in the same cell, and very quick – unless you have a very aggressive means of holding spectral peaks, it might be pretty impossible to spot your own contribution in a cell.

Especially the downlink uses OFDM, and usually also power control, so if your handset is the main downlink user in a cell, all that you should be seeing if you had an SDR that could actually see the whole LTE downlink channel, would be what would look like a "flat-top" section of spectrum that is basically elevated white noise, possibly exhibiting non-flatness due to frequency-selectivity of the channel.

If you look at a section of OFDM, all you'll see is a noise floor, unless you manage, by luck or synchronization, use an FFT that exactly "hits" (integer factors) of the subcarrier spacings (in which case you'd be lucky to see staggered sinc spectra of the OFDM subcarriers). You'd need a very long FFT and very good SNR (which you don't seem to have) to see the sinc carriers unsynchronized.

Are you actually observing your phone's LTE signals in your pictures?

Your 800 MHz spectrum shows something 200 kHz wide with a rectangular shape; that might be a bunch of LTE subcarriers (those have 15 kHz spacing), but it's definitely not coming out of the noise floor far enough to be your phone's resource blocks (also, questionable whether you'd get a resource block allocation that's static for that long).

Considering the periodic spurs and the intereferer at ~1719.35 MHz that looks a lot like a mixed-up rectangular wave, I'll go with no, you're likely not looking at LTE here; there should be far more dynamics in the waterfall.

Is your ultimate goal achievable?

My goal here is to be able to detect my phone's transmitted signal and then, to make sure I can distinguish it before I invest in a more expensive SDR to be able to monitor higher bands.

Detecting activity of any one phone in vicinity

As said, your TX signal should be much stronger close to your handset than it's RX (which really is just the simple physics of spatial power density going down with the square of distance). Especially when your phone displays "few bars" (i.e. it has low receive SNR), it will have to use a lot of power when transmitting (which is why I'm pretty sure you're not observing your phone in either screenshot).

A simple power detector with a high-enough threshold should do an approximately good enough job. You'd still not be sure whether it's your phone, or the phone in the next room. LTE relies on power control, i.e. your phone will only use as much power as necessary to achieve the rate it needs (that's not something that your phone is allowed to choose – it's necessary to keep the dynamic range of the receiver on the base station side manageable and to keep interference at bay).

Detecting activity of a specific phone

Now, this get's a lot more complicated, as you'll have to analyze the LTE signal. Not quite sure from the top of my head, but I'd go with "no, from the uplink signal alone, you can't say which phone is currently transmitting".

LTE is a cellular infrastructure network, not an ad-hoc burst network; hence, stations are assigned times when they should be transmitting by the base station using the downlink. Inherently, that means that the station doesn't need to indicate who it is when using the uplink; the base station knows because it assigned the uplink resources, who's using the uplink. Thus, you'd have to observe the downlink more than the uplink to know when you're phone's talking. Luckily, LTE is generally pretty well-encrypted, so you shouldn't be trivially able to extract very specific information from the downlink about your phone, but you might at least be getting unencrypted local IDs of the different stations in the cell from the downlink, if your SDR receiver software is able to demodulate the signal.

Not the answer you're looking for? Browse other questions tagged frequency-spectrum sdr gnuradio lte or ask your own question.

1
Multipath resistance of spread spectrum systems
0
Checking for VHF pulse with SDR and python
0
why transmitting a long pulse its spectrum gets spread?
1
Best way to resample an OFDM signal without interpolating + filtering?
1
Detecting a three-tone signal in real-time
0
Communication between two USRP : mismatched spectra between transmission and reception
0
SDR : Signal divided between the edges of the receiving window