Question about Fourier descriptor and the physical meaning of the coefficients

I would have some questions about the Fourier descriptor and the physical interpretation of the individual coefficients. I'm rather new to this concept, so I would be looking for a simple answer.

To start with I have a curve in xy [mm] coordinates (188x2 points). To calculate the descriptor I use the function found in R.C. Gonzales 'Digital Image Processing using Matlab' (p. 629). From that I get a vector with the descriptors An (188x1). As far as I understand the concept of the descriptor I can 'filter' out the high frequencies by reconstructing the shape again with only a handful of descriptors.

Here are my questions now:

I hope someone can help me better understand this. Thank you in advance.

This question overlaps, to an extent, with this one. The best way to understand the Fourier Descriptors is through a basic understanding of the Discrete Fourier Transform.

The "curve" is basically a complex signal at the input of the DFT that is decomposed to a sum of wavy ellipsoid rings of increasing frequency.

Another convenient way to think about this is that what we usually see as "amplitude vs time" has now become "radius vs angle". Amplitude of a quantity versus time is how this quantity increases and decreases over time. In the radius vs angle way of thinking, you map the amplitude to the radius of an ellipsoid and the angle to a point on its circumference. Just as you read a diagram left to right, you "read" a curve beginning at some point and proceeding to the next either clockwise or counter clockwise.

...where this DC component is in the descriptor vector, since its a even number of values. Is it the term with the highest value?

If I recalculate the shape with only 2 descriptors I obtain a circle around the mean position with a certain radius. Is the radius then the second highest value?

It is difficult to know what your reconstruction looks like without a specific example. The first component will be an ellipsoid which represents the mean radius through all points. If you keep adding components, all that you do is adding "squiggliness" to the average ellipsoid until a point where that original ellipsoid has become as squiggly as the curve.

Here is an excellent example: 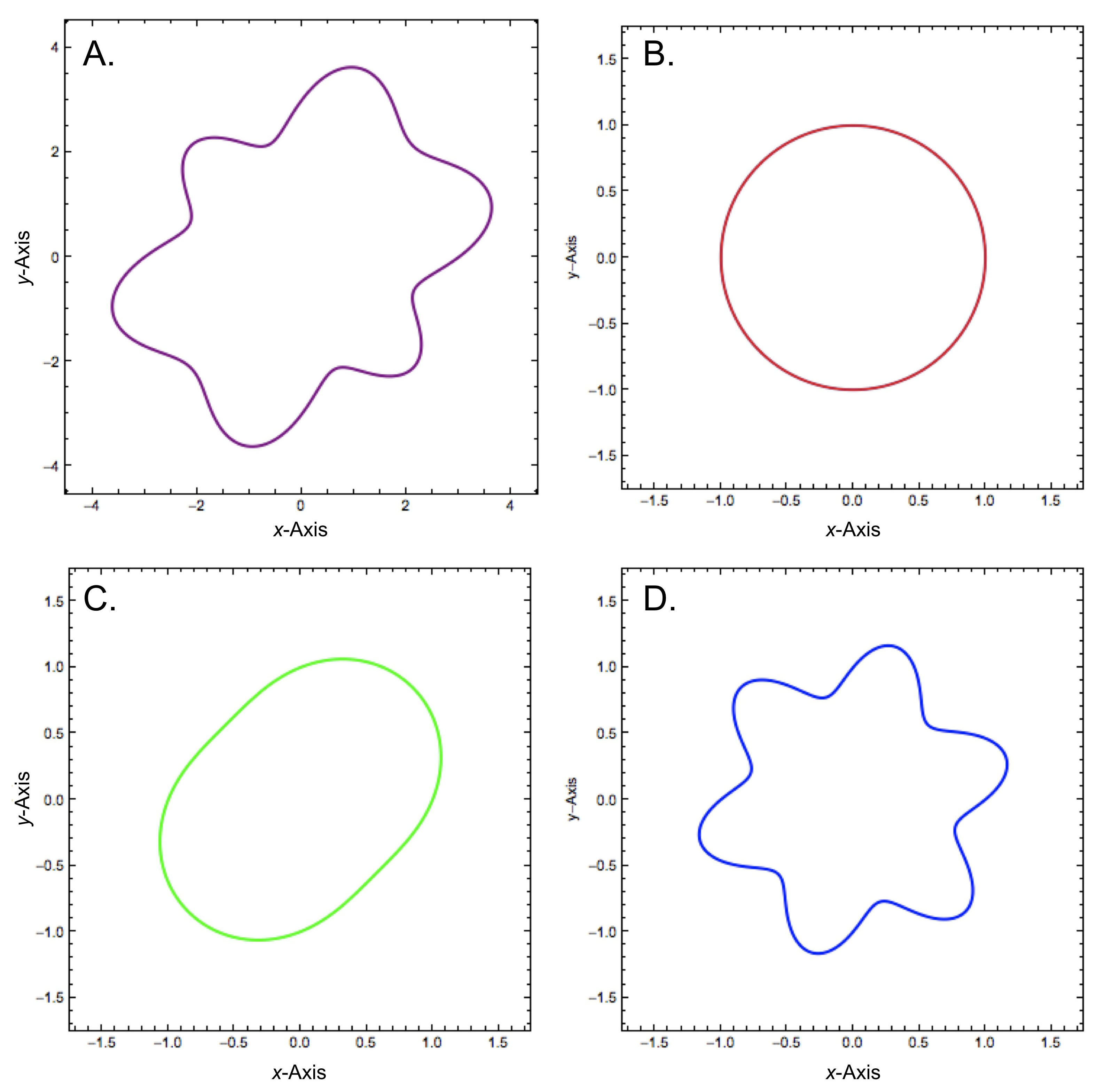 I'm mainly interested in the ellipses that is created with recalculating the shape with 4 factors. But I would also like to understand the whole concept correctly. I read that the $A_{-1}$ and $A_1$ coefficients represent the major and minor axis of this ellipses. And that with $d = 2(|A_{-1}| + |A_{1}|) $ and $e = 2(|A_{-1}| - |A_1|)$ the axis can be calculated in a length unit. Do I have to scale these values somehow? Because if I pick the third and fourth highest values, the result is not what I expect.

What you are probably experiencing there is the scaling factor of the DFT.

I do not have Gonzalez' book handy right now but I will check and amend this part if it refers to something else, especially with respect to the way $A$ is indexed here.

In general there is a $\frac{1}{N}$ scaling factor for the DFT which is usually applied in the inverse transform (see for example here and here. So, the forward transform evaluates sums directly and this is why you end up with $V$s that are very high compared to the original signal. If you want to use those frequency coefficients directly, you have to divide them by $\frac{1}{N}$.

But, apart from the DC component, the rest of the ellipsoids do not have a "radius".

What are you trying to measure?

Not the answer you're looking for? Browse other questions tagged matlab signal-analysis fourier-transform shape-discriptor or ask your own question.

0
How do I understand Fourier descriptors more visually and intuitively?
-1
Will the phase of the reconstructed data using a single MRI k-space point show any curvature?

0
How to implement Fourier Descriptor of an image?
1
How do I interpret the result of a Fourier Transform?
0
How to get the data (pointwise frequency, amplitude and phase) in a FFT performed on ImageJ?
1
Speckle pattern - speckles detection
0
A question about ICA and non-gaussianity
0
What does frequency weighting an acceleration signal mean? And How do I frequency weight the raw acceleration data collected?