I'm trying to learn about how the spectrum of a sine signal changes when fed into a waveshaper and i've learnt a great deal from you guys here on stackexchange. Specifically how a transfer function such as $y = x + x^7$ adds the fundamental frequency of $x$ and then odd overtones up to the $7^{th}$ overtone.

Since i'm no mathematician and just now learning some dsp for an effect plugin i'm developing i need to be able to plot the spectrum of $y$ to learn more about the behavior how ploynomials affect this spectrum.

I could use Fourier tranform in matlab on $y$, but it feels like an unnecessary step.

I would like to be able to plot it like in this stackexchang question: Add odd/even harmonics to signal?

Here is a way that you can approach this mathematically. It's not the only way. Another way to approach this is with Tchebyshev polynomials and I will leave that to someone else.

Now you might see where this is going. So using the cosine identity (so i don't have to mess around with powers of $j$ in the sine identity):

It appears that we will have to deal with the two cases of even $k$ vs. odd $k$ differently.

Note that only DC and even-numbered harmonics come outa the even powers of $\cos^k(\omega t)$. 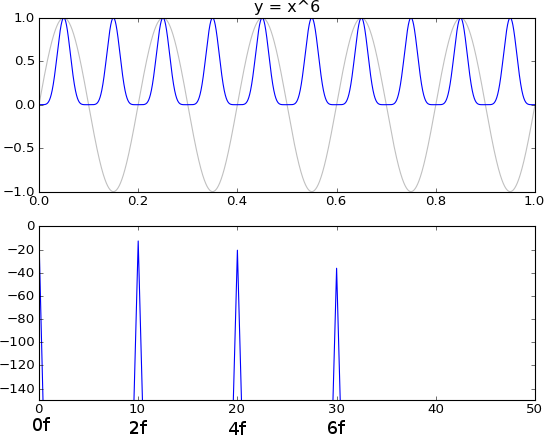 Note that only odd-numbered harmonics come outa the odd powers of $\cos^k(\omega t)$. 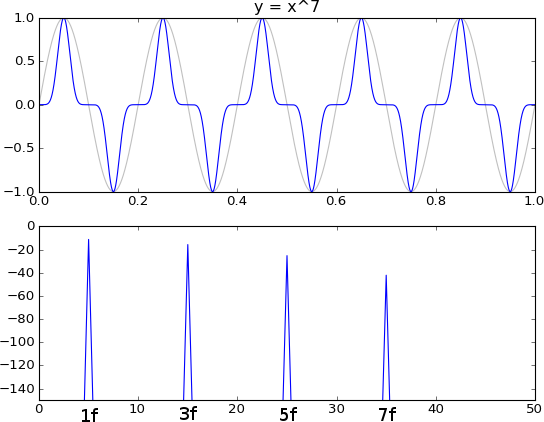 So now what if we pass this sinusoid:

through this polynomial mapping function:

$\lfloor u \rfloor$ is the floor() function, which is the largest integer no larger than the argument $u$.

where, apparently the DC component of the Fourier cosine series is:

FFT does exactly what you are after. For example, in Python:

I'ld like to provide an alternative frequency domain derivation for the discrete-time spectrum of memoryless polynomial nonlinearities for inputs of the form $x[n] = A \cos(\omega_0 n)$, which would complement the time domain derivation provided by RBJ. As revelaed, it's longer to describe but shorter to compute.

We are interested in the spectral representation of the signal $y_m[n]$ defined with the following nonlinearity : $$ \boxed{ y_m[n] =\left( x[n] \right)^m }$$

Since, multiplication in the time domain transforms into convolution in the frequency domain 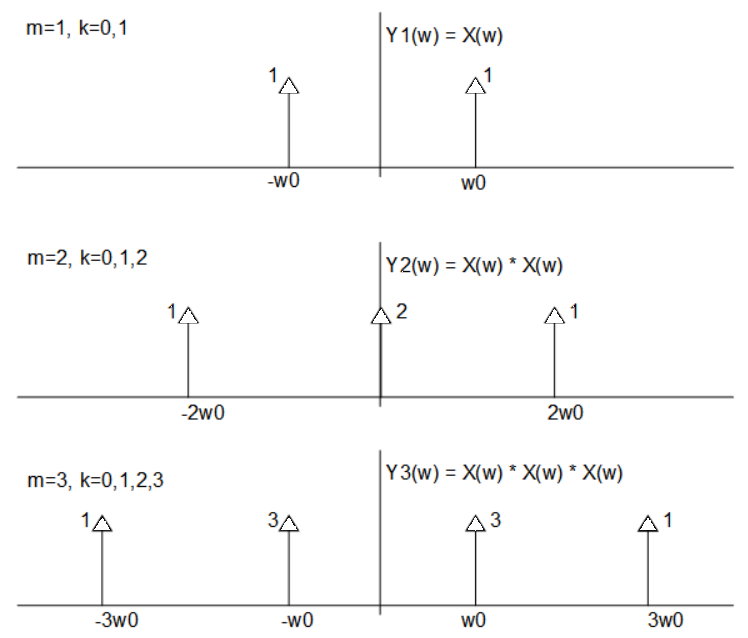 In the figure-1, the impulse weights are shown as integers, omitting the $(A/2)^m$ weighting, so that the binomial nature of them are revealed. By the visual inspection of this figure, one can arrive at the following closed form expression for $Y_m(\omega)$ :

Indeed $Y(\omega)$ can trivially be extended by utilizing the linearity of the DTFT. Thus we can immediately conclude the result as:

Yet, however, one also wishes to explicitly compute the impulse weights $B_k$ for each impulse $B_k \delta(\omega - k\omega_0)$ located at the frequency $\omega = k \omega_0$ so that the spectrum $Y(\omega)$ is expressed as

To do so requires to divide the indices $k$ into even and odd values and to perform two independent summations as did RBJ in his answer. However, I would like to make a simple trick and compute the weights in a single formula. 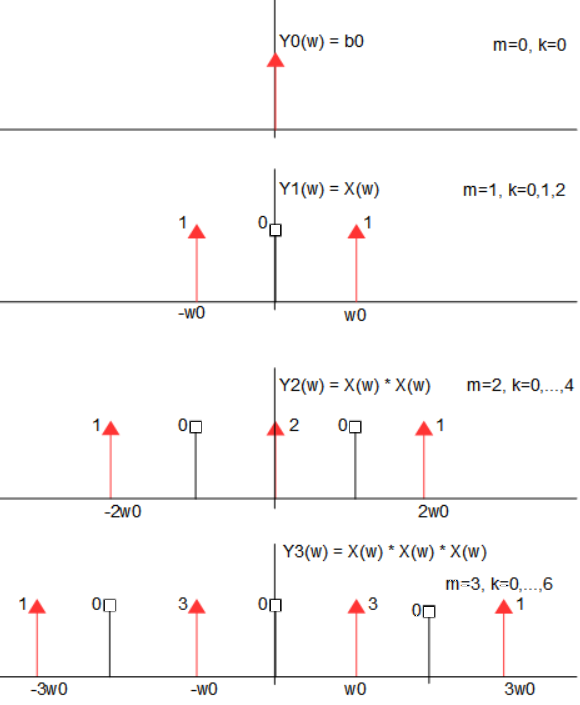 In the figure-2, the black-or-white? square impulses are actually nonexistant, hence their weights are $0$. Yet with this trick we assume that the spectrum $Y_m(\omega)$ includes impulses at every $k\omega_0$ stop, rather than at $2\omega_0 k$ as previsouly did. We have to change the formula of $Y_m(\omega)$ a bit to reflect this modification:

is the conditional combinatorial operator (as I named it so!). 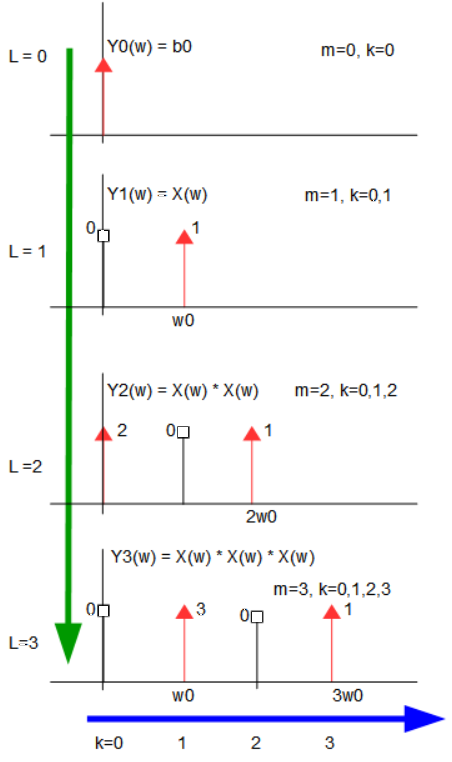 From the figure-3 (note that green line index $L$ is replaced with $r$ in the below formulas) it can be seen that for computing each final coefficient $B_k$ for the impulse located at $\delta(\omega - k \omega_0)$ the following sum is needed:

in terms of final coefficients $B_k$ for each impulse, is found to be:

And this closes the second part of the problem, assuming there are no errors in the derivations.

NOTE: The answer provided by RBJ computes the weights of the cosine terms denoted by $b_{2n}$ and $b_{2n+1}$ for even and odd terms separation. Here I provided frequency domain solution corresponding to the coefficients of frequency domain impulses, located at $\omega = k \omega_0$, which is denoted as $B_k$ (for both even and odd terms) and which has the following relation to those time domain coefficients $b_n$ as:

Not the answer you're looking for? Browse other questions tagged frequency-spectrum waveshaper or ask your own question.