What is the difference between Antenna port and Physical Antenna in LTE?

I have just started working on the 5G NR physical layer and I have difficulty understanding the concept of Antenna Port at the downlink.

In release 10 there supposedly 15-22 antenna ports for CSIRS (Channel State Information Reference Signal) and different transmission modes have different antenna ports assigned to them how are these antenna ports actually mapped to physical antennas.

This answer is for LTE standard, not 5G NR. However I do believe that the basic concept does not change since.

(Logical) Antenna port is defined formally as in 3GPP 36.211 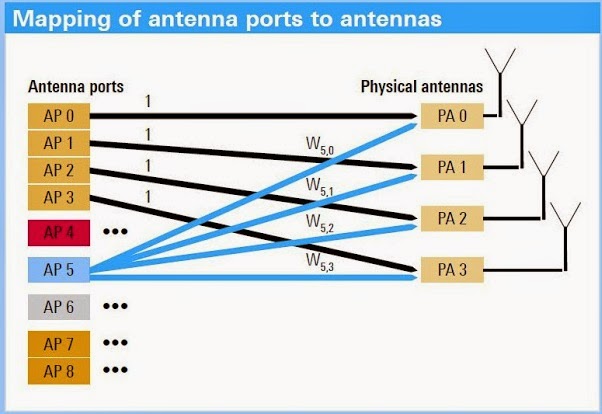 In 5G NR or 4G LTE, Multiple Input-Multiple Output (MIMO) transmission is a key technology specifically in downlink. Signals transmitted from gNB/eNB via different antennas or signals subjected to different and for the receiver unknown, multiple antenna precoding will experience different radio channels even if the MIMO antennas are located at the same site.

In general, it is very critical for a UE to consider the certain assumption in terms of the relationship between the radio channels experienced by different downlink transmissions e.g. UE needs to understand what reference signal(s) should be used for channel estimation for a certain downlink transmission and determine relevant channel-state information required for scheduling and link-adaptation purposes.

For the same reason, the concept of antenna port is used in the 5G NR and it follows the same principles as in 4G LTE. The term “antenna port” is a logical concept related to physical layer (L1), and not the physical one like RF antenna which is visible on tower.

Not the answer you're looking for? Browse other questions tagged digital-communications lte communication-standard or ask your own question.

10
What is difference between OFDM and GFDM?
2
Questions Downlink OFDMA in LTE
0
Difference between diversity gain and coding gain
2
What is 'antenna-chain permutation' and its advantages?
0
DC Components and Frequency