Here is a graphic I have that demonstrates ISI due to multipath propogation: 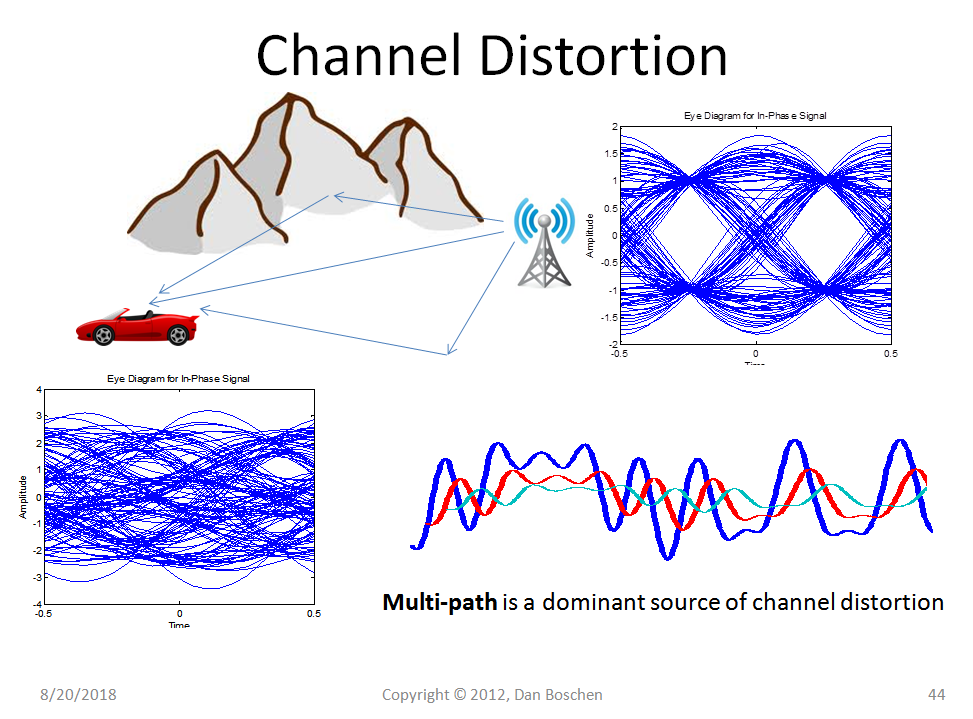 Notice the eye diagram in the upper right hand corner showing what we should receive if there was no ISI, or other noise for that matter. (This eye diagram is showing the waveform vs time over 2 symbols again and again so that we can see the effects of ISI clearly. If you have any questions about eye diagrams in general, ask it as another question and we can go into further details on that).

This waveform reaches our receiver over multiple paths, each with their own delay and attenuation as shown by the multiple waveform vs time plots in the lower right hand corner of the figure. The eye diagram as received looks like the horrible mess due to this interference that is depicted in the lower left hand corner. (Luckily this can easily be undone through channel equalization in the receiver).

The variation in time of all the different propagation paths is known as the delay spread. Below is a plot I have shown in other posts showing the typical delay spreads for macro-cellular channels, as tabulated by Professor Paul Walter Baier of the University of Kaiserslautern, Germany (Vielen Dank, Herr Professor Baier!): 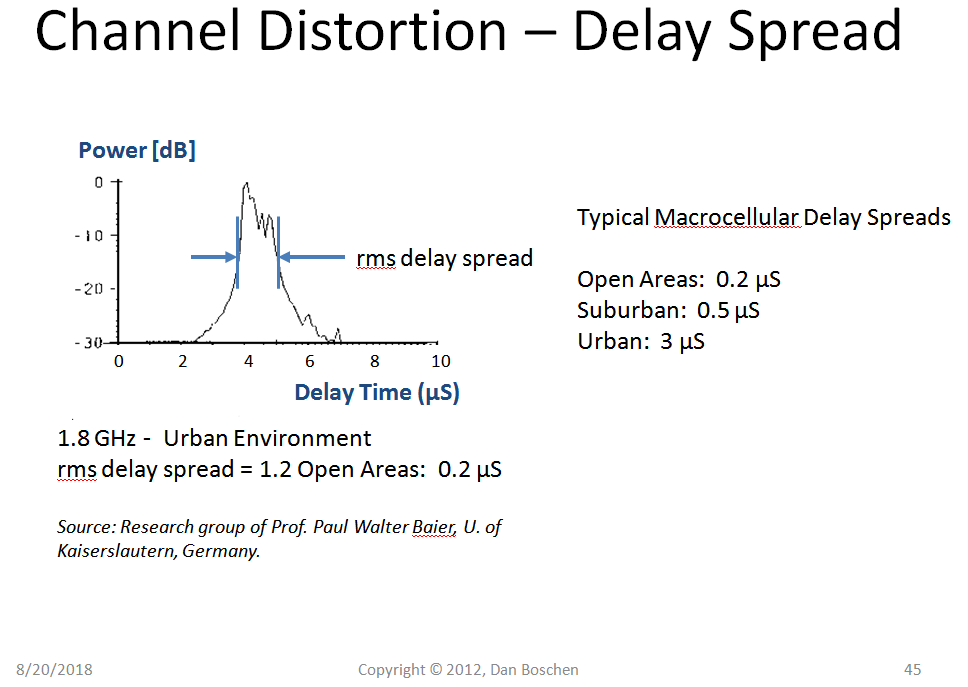 The significance of delay spread is whether we end up with Frequency Selective Fading (which means deep selective frequency nulls within the passband), or Flat Fading (which means the entire passband power level will vary, equally in frequency across the passband). In the figure below this is demonstrated by two dominant paths with a Delay between the paths before summing together at the receiver. On the right is the resultant magnitude of the received signal versus frequency for two different delay conditions, the red plot is the result of a relatively long delay, while the blue plot is with a relatively short delay. The shaded region is our example channel at a particular frequency of interest. Notice for the red (long delay) given our channel bandwidth that we have the possibility of a deep null, selectively within our passband, while for the blue (short delay) the power level across the passband is generally much flatter. If you are familiar with the characteristics of an FIR comb filter then you know exactly what is going on; a fixed delay is a phase that varies linearly with frequency, so at some frequencies the phase will be $\pi$ radians so that the receive signals will cancel each other, while other frequencies the phase will $0$ (or equivalently multiples of $2\pi$) so that the signals will coherently add. Since the phase of a fixed delay varies linearly with frequency we see the repetition of this over frequency as the delayed path passes repeatably through $0$ and $\pi$ conditions as we vary the frequency of interest. A longer delay will increase more in phase for a given change in frequency, hence the tighter frequency response for that case. 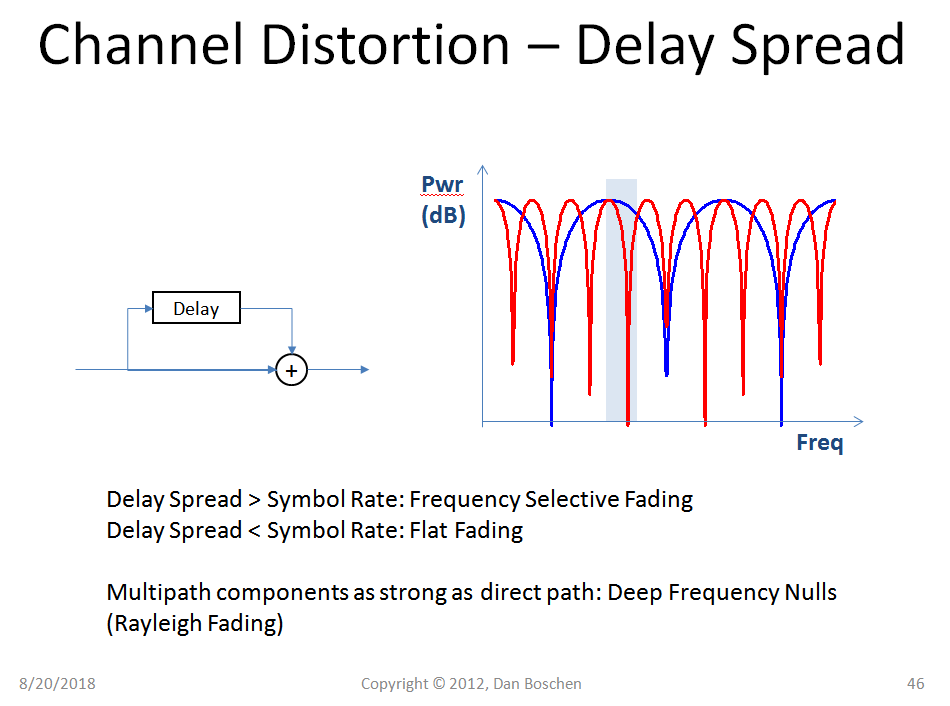 Limited bandwidth induced ISI is easily understood in the time domain: A relatively tight filter in the frequency domain MUST have a long impulse response in the time domain (consider filtering as a low pass filter, and in order to really smooth the signal, you must average for a long time). So if you have a filter with a long impulse response, it goes to say that it's response to one symbol will extend into other symbols, causing Inter-Symbol-Interference. The trick is to provide relatively tight filtering while not causing ISI, and this is done with the class of Nyquist filters. They do this by having zero crossings in the impulse response at the symbol spacing. Thus the response from one symbol is always zero at the decision-sampling location of all other symbols. In fact the clean eye diagram in the first plot was created with such a Nyquist filter (the raised cosine filter specifically). All the deviations of the waveform are the result of trailing impulse responses of earlier symbols.

For further details on that see: Why root raised cosine filter can eliminate intersymbol interference (ISI) ?

We know that signals with infinite-time support have a finite support in the frequency-domain, and viceversa. The only way to get a finite-time support is having an infinite bandwidth. Thus, if you have a band-limited channel, then the corresponding impulse response will be infinite in time. This means that no matter how spaced the symbols you send are, you will always have a "tail" of the previous symbol when sampling the current one. This is ISI caused by limited bandwidth.

Now, on top of it, you have to consider the fact that in real life electromagnetic waves are reflected and attenuated. For example, if I send a symbol at time $t_0$, maybe the wave follows two different paths to get to the receiver, each with delays $\delta_1$ and $\delta_2$. This means that, at the receiver, I will have the same symbol "twice": it will appear at $t_0+\delta_1$ and $t_0+\delta_2$. Depending on the symbol rate, this can be relevant or not. Imagine that I send the next symbol at some $t$ such that $t_0+\delta_1<t<t_0+\delta_2$. When I sample the signal to get it, how can I know that I'm getting information of the original new symbol, or of its combination with the delayed previous one? This is ISI cause by multipath propagation.

It's much more complicated actually, since there could be constructive and destructive interference, phase shifting, etc. However, those are the basic intuitive ideas behind the concepts. Apart from how they origin, the ISI has always the same effect on the receiver: it's just residual information from other symbols that we don't desire.

There are other causes for ISI. For example, bad synchronization. If I sample the received signal at non-optimum instants of time, I may be hitting the signal when it doesn't represent a pure symbol. The typical case is when using an ideal (infinite, non-causal) $\mathrm{sinc}$ pulse. If the symbol rate is $T$, and the width of the $\mathrm{sinc}$ is such that its zeros are located at $t=nT \ \forall n\neq0\in \mathbb{N}$ when it's centered at $0$, then if we sample the received signal every $T$ seconds, then we will only have information about the pure symbols, because every other pulse is null when the current symbol is at its maximum. If the sampling is not so tight, then we will be sampling linear combinations of all symbols previously sent and the current one. Thus, there will be ISI.

This last example is related to your second question. If the delay was constant, then you could take it into account and offest the receiver sampling for that amount. However, if the delay varies, then you can't do that. Hence, no matter how small the delay is, you will always have some amount of ISI.

Not the answer you're looking for? Browse other questions tagged digital-communications bandwidth fading-channel or ask your own question.

2
How to calculate bandwidth require for OFDM
2
Use of equalizers in communication systems for Intersymbol Interference
1
Why is bandwidth always limited in a real (physical) channel?
6
Flat fading criterion of OFDM subcarrier spacing
3
Educational purpose - What is the correct way to simulate a multipath fading channel which has ISI
0
What is the suitable mathematical form of the multipath channel impulse response?
3
Sample rates, Samples per Symbol, and Digital Pulse Shaping
0
Signal bandwidth and channel bandwidth