For the adaptive filter to work properly, a desired signal d(n) needs to be provided. The output from the equalizer y(n) is subtracted from d(n) to produce an error signal, which is used to adjust the filter weights.

To answer (1) the adaptive equalizer without a training sequence (blind equalization) can be used based on the decisions of the received sequence. This specifically is called a "decision directed equalizer". Of course it can not work in very low SNR conditions, where a training sequence would be required. A typical approach is to have the training sequence first to remove channel ISI and establish a higher SNR signal. From this point a decision directed approach can continue to track and maintain the equalized signal as the channel varies with time. (If I recall correctly, a decision directed approach can typically converge if the bit error rate is better than 1E-3 -- but this exact figure I am not confident in).

I have heard (but have no experience with) that the most commonly used adaptive algorithm for blind channel equalization is the Constant Modulus Algorithm. Perhaps someone more knowledgeable about this approach can add an additional response with more comments and details about CMA (or better if I cannot Google a satisfactory explanation I can post it as a question myself).

To answer (2), the LMS (Least Mean Square, also referred to as the Gradient Algorithm) and the RLS (Recursive Least Squares algorithm) are the two most common algorithms for recursively minimizing mean square error in adaptive linear equalizers (in contrast to non-linear Decision Feedback Equalizers, which are not to be confused with "Decision-Directed" mentioned above, would be preferred in the case of frequency selective fading).

The LMS algorithm is well known, easy to implement and computationally cheap (requires $2M+1$ multiply operations, where M is the number of equalizer coefficients). It uses a Stochastic Gradient Descent Rule, so may converge slowly.

The RLS algorithm in comparison is computationally more expensive (requires $2.5M^2+4.5M$ multiply operations), but has faster convergence and good tracking.

For details on the LMS and RLS algorithms (and likely where I got the metrics quoted above), see Wireless Communications by Rappaport which I have notated in the plots below. Notice the computational difference between the two algorithms: 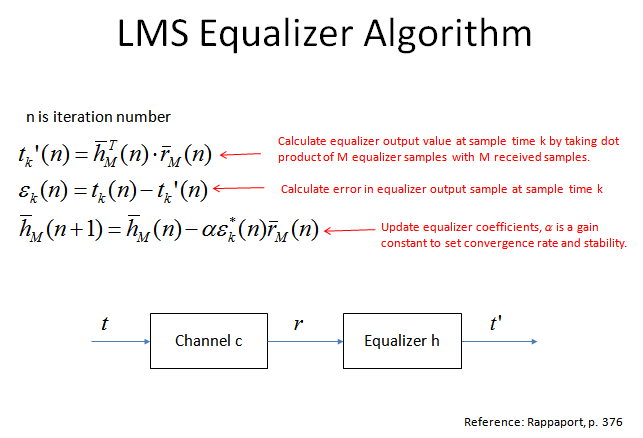 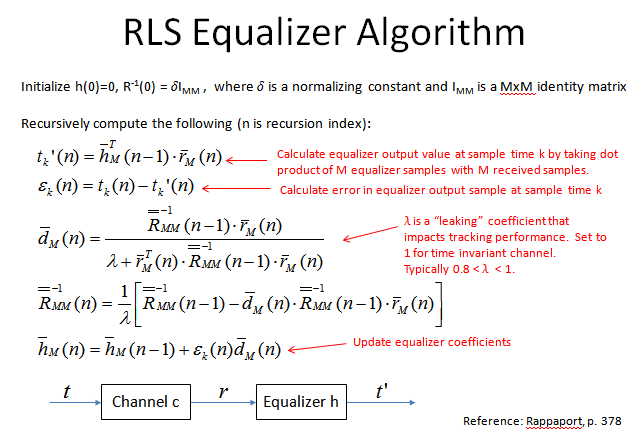 Also see this post here where I give the code and detailed intuitive explanation for the determination of the LMS equalizer coefficients using the Wiener-Hopf equation: Compensating Loudspeaker frequency response in an audio signal. In this post I used a known copy of the signal to determine the channel impulse response in the static case (not a recursive solution). However as noted above this could also be done blind with the decisions of what we think was transmitted if the SNR was high enough to make a sufficient number of correct decisions.

you can find additional detailed explanations on Wikipedia: https://en.wikipedia.org/wiki/Recursive_least_squares_filter

Not the answer you're looking for? Browse other questions tagged filters digital-communications adaptive-filters least-squares lms or ask your own question.