I am studying the OFDM system and before to start I have decided to study the main concepts of modulation. And I have spent yet a lot of time to understand the concept of an equalization to reduce ISI.

I have found so many lectures and ppts, which provide and explain that. But it doesn't make sense for me.

What I understand, that the equalizer is a digital filter, that should be applied after receiver part. Is it right? And it reduces the ISI. A zero-forcing equalizer reduces the ISI complete.

But I can't find more detailed information about how the equalizer reduces the ISI. What is a principle of this type of the digital filter/ equalizer? 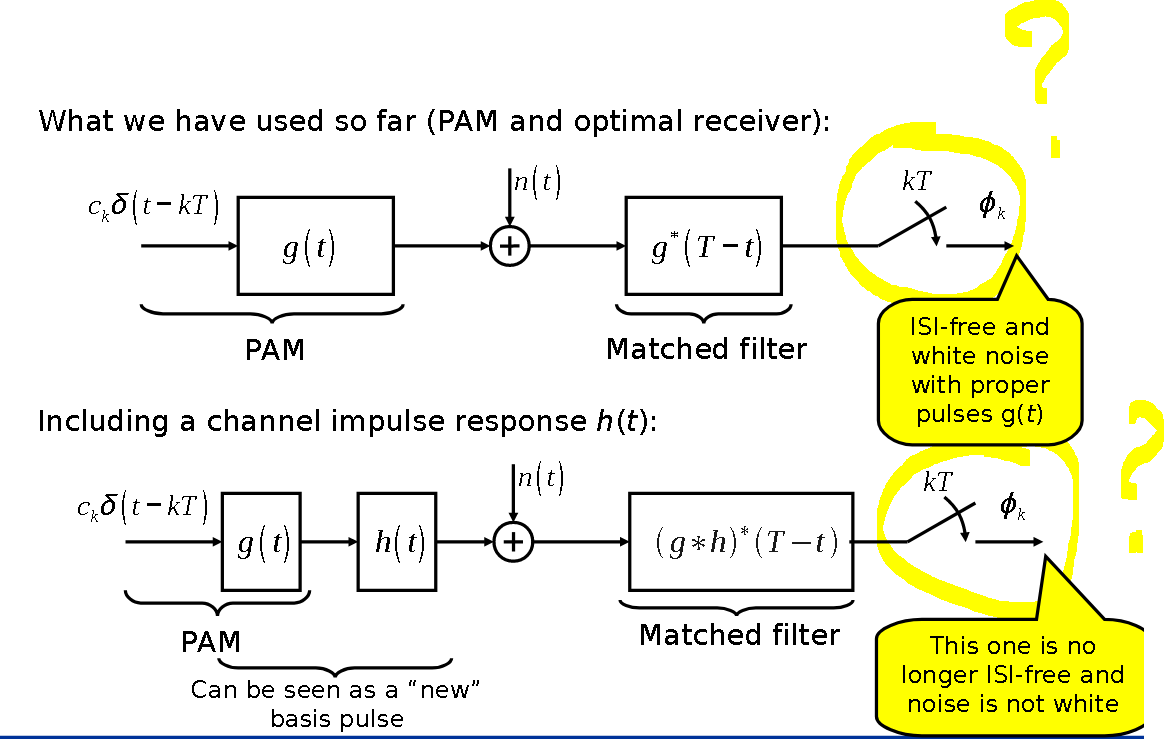 In OFDM DFT and IDFT work as an equalizer, sampling...

If the channel just adds noise and does not cause any distortion (as in the first figure), you can design the transmit filter $g(t)$ such that, when combined with its matched filter at the receiver, the Nyquist criterion for zero intersymbol interference (ISI) is satisfied. If the channel adds linear amplitude and phase distortion (as in the second figure), then generally the Nyquist criterion will not be satisfied and you will observe ISI, which will increase the error probability.

A linear equalizer is designed to (at least partly) compensate the effect of the channel $h(t)$. There are different optimality criteria, such as the zero-forcing criterion you mentioned, which eliminates ISI completely, but which does not take into account the noise. A zero-forcing equalizer basically inverts the channel response, if this is possible at all (with a causal and stable filter). If the noise is not negligible, it is usually better to use a different criterion such as the minimum mean square error (MMSE) criterion, which jointly minimizes the effects of ISI and noise.

Since many channel responses are unknown and/or time-varying, i.e., the impulse response $h(t)$ changes over time, equalizers must be adaptive. In practice, most adaptive equalizers use a sort of least mean squares (LMS) adaptation algorithm because it is relatively simple and robust.

This topic is quite broad and complex, so I would recommend that you read a good introductory text on digital communications, instead of gathering unrelated pieces of information from the internet.

Also take a look at this related question and its answer.

To answer the second question:

In the case when the pulse shape satisfies the Nyquist criterion, and there is no ISI introduced by the channel, the role of the pulse shaper is to shape the spectrum to limit the bandwidth of the signal. The pulse shape with the minimum bandwidth for a given symbol period $T_s$ is $g(t) = \operatorname{sinc}(t/T_s)$. However, this pulse shape has infinite extent in time.

The root-raised cosine pulse allows for tunable trade-offs to be made between bandwidth and time-domain decay time. It also decays more quickly than $\operatorname{sinc}$ pulses, approximately $\sim 1/|t|^3$, at the cost of having a slightly wider bandwidth.

Not the answer you're looking for? Browse other questions tagged digital-communications modulation equalization equalizer interference or ask your own question.

2
Use of equalizers in communication systems for Intersymbol Interference

4
Design of equalizer for wireless communication
2
Bit error rate curves, theoretical and simulation
2
Concepts: Ideal and Non Ideal Channel Resulting in Inter Symbol Interference
1
LMS and delta impulse response- Equalization concepts
4
What is the difference between pulse shaping and equalizers when used to cancel Inter-symbol Interference (ISI)?
0
Inter-Symbol Interference (ISI) channels
2
About understanding a Matched Filter
0
inter symbol interference vs digital modulation
0
what is OQAM (Offset QAM) and why it is required?