I'm a computer scientist but not from the signal processing community. I want to implement a real time digital low pass filter (to begin with) for a sound processing application. I've done some research and found some solutions:

So my question is not really "give me a filter algorithm". Its more: How do you make those formula?

What I want is not a ready-to-use algorithm that I can copypast. I want to understand what I'm doing and how it works. However! All the documentation that I've found until now, including the Wikipedia pages, are directed to people that already have a solid background in signal processing (a lot of unexplained notations, function names, etc.). This is not my case.

I haven't found anything like that yet. If you'r willing do it here you'r welcome. Or you can give me links to online literature, blog posts, anything that popularize all thoses notions. You'll make me happy.

EDIT: I want to clarify that I'm not looking to know how a general low pass filter works, using a convolution and all that. That I already know. I mentioned the Butterworth filter and associated algorithm because it is a linear filter (algorithmically speaking). Something that I can reasonably use in a real-life application for real time processing.

"Low pass" is a qualifier. I can recall maybe more then 5 low pass qualities but each bringing along a different phase response making it attractive to a particular application. Others may be able to recall even more.

What I want is not a ready-to-use algorithm that I can copypast. I want to understand what I'm doing and how it works.

This would make the question very broad. It is good however that you say that you have an understanding of convolution. So, if I had to put it in one phrase, all you do is pitching the right phases against each other. For more information, you might want to refer to this question and its answers.

But the idea is the same: pitch phases against each other.

How you do that? That would take a bit more space to explain but there are monumental works in this field that contain much more information.

However! All the documentation that I've found until now, including the Wikipedia pages, are directed to people that already have a solid background in signal processing (a lot of unexplained notations, function names, etc.). This is not my case

The notation is simply discrete sequences with the addition of the convolution operator ($*$). Within the context of DSP there are some standard signals used for specific purposes that sometimes are not explained. For example, the unit impulse or the step or the ramp and others. And also the standard notation used in transforms.

I would expect that you would pick these things up very quickly, especially if you follow one of those textbooks that are highly regarded.

Again, the "why" is answered by looking at the purpose for which the filter was designed for. For example, the Gaussian filter has "... no overshoot to a step function input while minimizing the rise and fall time...". So, it is the fastest non-ringing filter. That is its unique characteristic (notice here, still a low pass).

I appreciate that you need a starting point, so, one of the easiest methods to design an FIR filter is to design its frequency response in the frequency domain and obtain your impulse response, usually referred to as $h[n]$ (it is in the time domain), via the inverse Discrete Fourier Transform with the potential application of a window function to reduce the length of the filter gracefully (also referred to as the order of the filter).

The reason for wanting to reduce the number of coefficients is to reduce computational complexity. But you don't want to simply chuck away some coefficients, you want to do it in a controlled way so that the filter doesn't deviate too much from its specification.

One of the simplest expressions of this method is the sinc filter.

Which, in a few phrases, is explained as follows: Draw a square pulse in the frequency domain that starts from DC (0 Hz) and stops at the cut-off frequency of your low pass filter. Do an inverse DFT of that and this results to a sinc pulse. Use that sinc to filter your data. The longer the sinc, the sharper the cut off.

For more information about this, please see here, here, or here.

Here is a back of the envelope quick demo of this (in Octave but easily translatable to other platforms):

The above, sets up a few variables and plots the frequency response of the filter which looks like this: 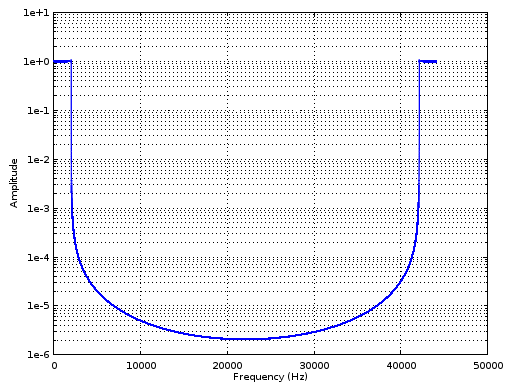 Which, as you can see, has a flat area in the beginning, that is your passband, followed by a very sharp roll-off region (the part that is almost vertical), followed by a stopband which shows a very high attenuation of frequencies beyond the 2kHz specification.

If you wanted to try this, pick a mono wav file (for convenience) that has the same sampling frequency, load it as a "signal" and then listen to the result of convolution. Like this:

(More information on the specifics of the above functions are available here).

Now, depending on the sound file, you might find that a cut off frequency of 2kHz isn't too audible so try f=200 above.

You might want to try different f and N just to see the effect they have on the filter.

This brushes over some key details (such as normalised frequency, transfer function and poles / zeros amongst others) but hopefully it will be enough to get you going.

I will try to be intuitive more than rigorous.
Low Pass Filter means a filter which limits the ability of the output data to change fast (Relative to a parameter called the Low Pass Cut Off Frequency).
Namely it make the signal transient to take longer (Smoother).

How do we do that?
We, make adjacent samples have similar values.

So for applying a Moving Mean Filter (Output is the mean value of few adjacent samples) means we applied a Low Pass Filter.

Another way is Auto Regressive model, which you pointed.
In that mode the output sample is the previous samples with a small addition which again, with proper ratio between the weight of the previous output to the new input means the speed of changes is limited.

This is the intuition.
If your needs are basic this might work (Just apply some weighing with non negative values, Let's say Gaussian Filter).
If you need more advance control you'll need to learn the frequency Representation of the sampled data.

Not the answer you're looking for? Browse other questions tagged filters lowpass-filter algorithms digital-filters highpass-filter or ask your own question.