Why is the correlation of two random markov chains so large?

A very simple python code shows that the correlation coefficient and spearmann rank between two datasets of uniform random numbers drops proportionally to the square root of the number of points in the dataset. However, when one compares Markov chains produced by accumulating those numbers, there is no such behaviour, and even for large data sets, correlation can easily be like 0.7. What is the origin of such behaviour? Are two random markov chains more "related" to each other than two random datasets? Can this effect be corrected? 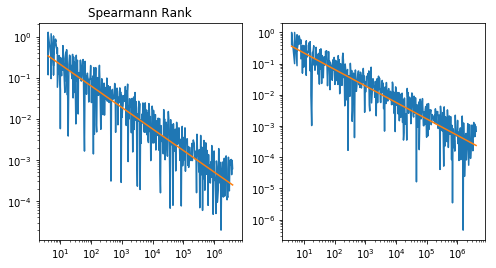 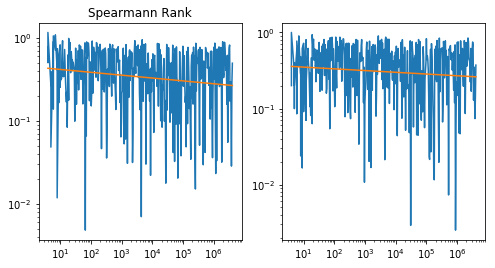 EDIT: Unsurprisingly, the original problem is a bit more tricky. I have (at least) two experimentally obtained data sets I know relatively little about. Formally speaking, there is nothing stopping me from calculating their correlation in order to investigate their relationship. Since I was getting garbage, I tried to investigate correlations of several semi-random datasets, until I arrived at a surprising (for me) result above. Let me refine the question: is it possible to guess from the shape of the data, whether or not correlation is an informative metric?

Hi: you can't cumulate two sets of random numbers and then calculate a correlation between them. The two samples are non-stationary ( since you are cumulating them ) and what you get is referred to as "spurious correlation" or "non-sensical correlation" in econometrics. ( some would say statistics but the econometricians really figured out what was happening ). I wouldn't do it justice trying to explain it here but, essentially, what you are doing is calculating two series whose means are changing over time so the correlation calculation is illegal statistically. Granger and Newbold figured out the statistics behind why this is in 1976 so if you want all the details, just google for "spurious regression". The econometrics literature on this is enormous and, even though what you are doing has maybe zero to do with econometrics, you are basically generating two series that are each random walks and then correlating them which is a garbage in garbage type of scenario. I hope this helps.

Not the answer you're looking for? Browse other questions tagged cross-correlation or ask your own question.