I am currently working on a MUSIC algorithm for DOA of RF emitters in 3D.

At the first stage, interested to apply the 1D MUSIC using a linear array of 4 antennas, and estimate only the azimuth of the target projected on X-Y surface(and not the elevation). The code was written and the relevant simulations performed.

However, there are two issues which require further clarifications. 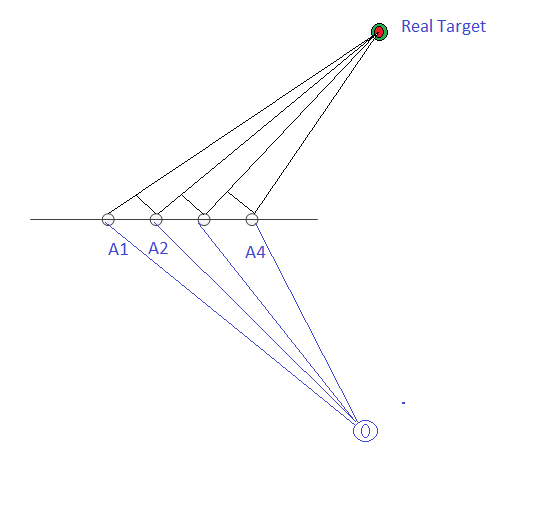 ​Wondered what may be the methods to eliminate the second solution, given a static array and a moving target.

Further Elaboration of the second question:

Given the following 3D scenario, and using 1D MUSIC algorithm(with 4 equally spaced antenna array for instance), can it be assumed that the estimated azimuth of arrival will be the projection on XY as can be seen below: 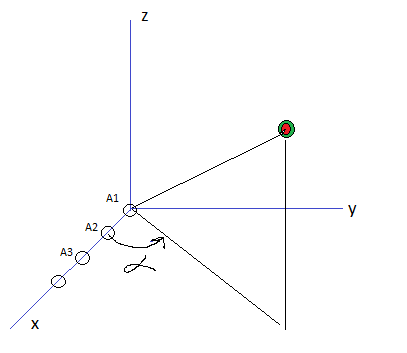 Thank you Envidia – as 360 degrees are to be covered, and mechanical rotating is not being considered, limiting to 90 degrees will not answer the requirements.

Thank you David, following is the presentation of the error in the azimuth, resulting from elevation. 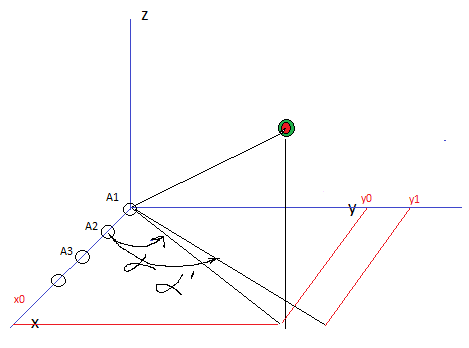 Thank you Stanely, as described in “Left-right ambiguity resolution of a towed array sonar” – page 9, Assuming a non-straight array breaks the undesirable symmetry of the beam pattern. In order to answer both the ambiguity and the error in Azimuth due to elevation, evaluating the UCA structure.

In addition, considering to use simple interferometry instead of Music, as multiple target separation is not a current requirement of the system.

The desired system must however be relatively compact(4 element UCA) and low cost(single channel proffered).

Taking into account the following origin of the error, when using ULA for 3D DOA:

Wondered what is the expression describing the estimated angle error size as a function of elevation(for a given x and y).

If you have three or more antennas, simply don't put them in a linear array. Any other array setup doesn't suffer from the ambiguity. Linear array is the worst choice here.

Of course, that breaks the periodicity constraint on the linear array that makes the autocorrelation space method MUSIC So, you'd need to change that algorithm.

Luckily, you can simply put them in a circular array and change from cartesian to polar coordinates, and keep a very similar structure for your MUSIC implementation. Just remember that the resulting estimate you get might not be in angles, but in trigonometric function of angles, and needs to be converted back.

Another option is to use two different linear arrays and to combine the observation.

As long as you stick to the linear array, you simply never get any information that can tell one side from the other, and that's the end of the story :(

If your array has some wiggle, there are some approaches to ambiguity resolution . The reference section to this thesis might be helpful.

In SONAR, an isotropic response of a sensor is a modestly incorrect assumption. For RF, a less reasonable assumption.

Not the answer you're looking for? Browse other questions tagged radar localization mimo or ask your own question.